Best The Lord of the Rings: The Two Towers (2002) Movie Quotes

Directed by: Peter Jackson
Written by: J.R.R. Tolkien (novel), Fran Walsh
Starring: Elijah Wood, Ian McKellen, Viggo Mortensen
Released on: December 18, 2002
Taglines: All will be sacrificed... All will be lost... Unless all unite against evil. 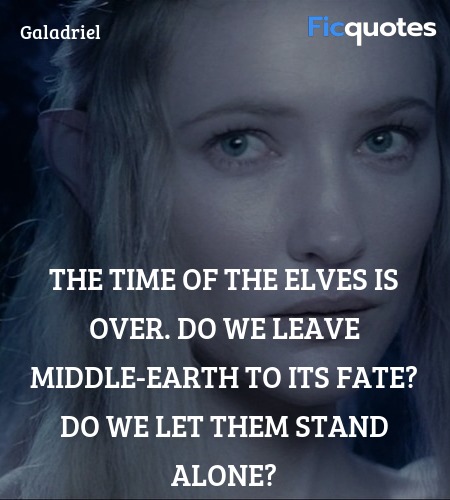 The time of the Elves is over. Do we leave Middle-earth to its fate? Do we let them stand alone?

The power of the enemy is growing. Sauron will use his puppet Saruman to destroy the people of Rohan. Isengard has been unleashed. The Eye of Sauron now turns to Gondor, the last free kingdom of men. His war on this country will come swiftly. He senses the Ring is close. The strength of the Ringbearer is failing. In his heart, Frodo begins to understand. The quest will claim his life. You know this. You have foreseen it. It is the risk we all took. In the gathering dark, the will of the Ring grows strong. It works hard now to find its way back into the hands of men. Men, who are so easily seduced by its power. The young captain of Gondor has but to extend his hand, take the Ring for his own and the world will fall. It is close now, so close to achieving its goal. For Sauron will have dominion over all life on this Earth, even unto the ending of the world. The time of the elves is over. Do we leave Middle-Earth to its fate? Do we let them stand alone?

Sam : You know I don't usually hold with foreign food, but this Elvish stuff - it's not bad.
Frodo : Nothing dampens your spirits, Sam.
Sam : Those rain clouds might.

Sam : There are dead things! Dead faces in the water.
Gollum : All dead... all rotten. Elves and men and orcses. A great battle, long ago. The Dead Marshes... yes, that is their name.

Faramir : I think at last we understand one another, Frodo Baggins.
Madril : You know the laws of our country - the laws of your father. If you let them go your life will be forfeit.
Faramir : Then it is forfeit. Release them.

Sam : I thought they were dead!
Gollum : Dead? No, you cannot kill them. No.

Sam : This looks strangely familiar.
Frodo : Because we've been here before. We're going in circles!

Sam : Who are they?
Gollum : Wicked men. Servants of Sauron. They are called to Mordor. The Dark One is gathering all armies to him. It won't be long now. He will soon be ready.
Sam : Ready to do what?
Gollum : To make his war. The last war that will cover all the world in shadow.

Frodo : I can't do this, Sam.
Sam : I know. It's all wrong. By rights we shouldn't even be here. But we are. It's like in the great stories, Mr. Frodo. The ones that really mattered. Full of darkness and danger, they were. And sometimes you didn't want to know the end. Because how could the end be happy? How could the world go back to the way it was when so much bad had happened? But in the end, it's only a passing thing, this shadow. Even darkness must pass. A new day will come. And when the sun shines it will shine out the clearer. Those were the stories that stayed with you. That meant something, even if you were too small to understand why. But I think, Mr. Frodo, I do understand. I know now. Folk in those stories had lots of chances of turning back, only they didn't. They kept going. Because they were holding on to something.
Frodo : What are we holding onto, Sam?
Sam : That there's some good in this world, Mr. Frodo... and it's worth fighting for.

Sam : Hey, Stinker! Don't go getting too far ahead.
Frodo : Why do you do that?
Sam : What?
Frodo : Call him names, run him down all the time.
Sam : Because... because that's what he is, Mr. Frodo. There's naught left in him but lies and deceit. It's the ring he wants; it's all he cares about.
Frodo : You have no idea what it did to him... what it's still doing to him. I want to help him, Sam.
Sam : Why?
Frodo : Because I have to believe he can come back.
Sam : You can't save him, Mr. Frodo.
Frodo : What do you know about it? Nothing!... I'm sorry, Sam. I don't know why I said that.
Sam : I do. It's the ring. You can't take your eyes off it; I've seen you. You're not eating. You barely sleep. It's taken ahold of you, Mr. Frodo. You have to fight it.
Frodo : I know what I have to do, Sam. The ring was entrusted to me. It's my task, mine, my own!
Sam : Can't you hear yourself? Don't you know who you sound like?

Frodo : Smeagol?
Sam : We're not going to wait for you. Come on.
Smeagol : Master. Master looks after us. Master wouldn't hurt us.
Gollum : Master broke his promise.
Smeagol : Don't ask Smeagol. Poor, poor Smeagol.
Gollum : Master betrayed us. Wicked. Tricksy, False. We ought to wring his filthy little neck. Kill him! Kill him! Kill them both! And then we take the precious... and we be the master!
Smeagol : But the fat Hobbit, he knows. Eyes always watching.
Gollum : Then we stabs them out. Put out his eyeses, make him crawl.
Smeagol : Yes. Yes. Yes.
Gollum : Kill them both.
Smeagol : Yes. No! No! It's too risky. It's too risky.
Sam : Where is he? Where has he gone? Hey, Gollum! Where are you?
Frodo : Smeagol?
Gollum : We could let her do it.
Smeagol : Yes. She could do it.
Gollum : Yes, precious, she could. And then we takes it once they're dead.
Smeagol : Once they're dead. Shh.
Smeagol : Come on Hobbits. Long ways to go yet. Smeagol will show the way.
Gollum : Follow me.

Faramir : My men tell me that you are Orc spies.
Sam : Spies! Now wait just a minute!
Faramir : Well, if you're not spies, then who are you?
Faramir : Speak!
Frodo : We are Hobbits of the Shire. Frodo Baggins is my name and this is Samwise Gamgee.
Faramir : Your bodyguard?
Sam : His gardener.
Faramir : And where is your skulking friend? That gangrel creature. He had an ill-favoured look.
Frodo : There was no other. We set out from Rivendell with seven companions. One we lost in Moria. Two were my kin. A dwarf there was also. And an elf. And two men. Aragorn, son of Arathorn, and Boromir of Gondor.
Faramir : You are a friend of Boromir?
Frodo : Yes, for my part.
Faramir : It would grieve you then to learn that he is dead.
Frodo : Dead? How? When?
Faramir : As one of his companions, I had hope you would tell me. He was my brother.

Sam : Can you see the bottom?
Frodo : No. Don't look down, Sam, just keep going!
Sam : Ouagh! Catch It! Grab it, Mr. Frodo!
Frodo : I think I found the bottom.
Sam : It's not natural. None of it.
Frodo : What's in this?
Sam : Nothin'. Just a bit of seasoning. I thought maybe if we was havin' a roast chicken one night or something...
Frodo : Roast chicken?
Sam : You never know.

Sam : What we need is a few good taters.
Gollum : What's taters, precious? What's taters, eh?
Sam : Po-tay-toes! Boil 'em, mash 'em, stick 'em in a stew... Lovely big golden chips with a nice piece of fried fish.
Sam : Even you couldn't say no to that.
Gollum : Oh yes we could. Spoilin' nice fish. Give it to us raw and w-r-r-riggling; you keep nasty chips.
Sam : You're hopeless.

Sam : I wonder if we'll ever be put into songs or tales.
Frodo : What?
Sam : I wonder if people will ever say, 'Let's hear about Frodo and the Ring.' And they'll say 'Yes, that's one of my favorite stories. Frodo was really courageous, wasn't he, Dad?' 'Yes, my boy, the most famousest of hobbits. And that's saying a lot.'
Frodo : You've left out one of the chief characters - Samwise the Brave. I want to hear more about Sam.
Frodo : Frodo wouldn't have got far without Sam.
Sam : Now Mr. Frodo, you shouldn't make fun; I was being serious.
Frodo : So was I.
Sam : Samwise the Brave...