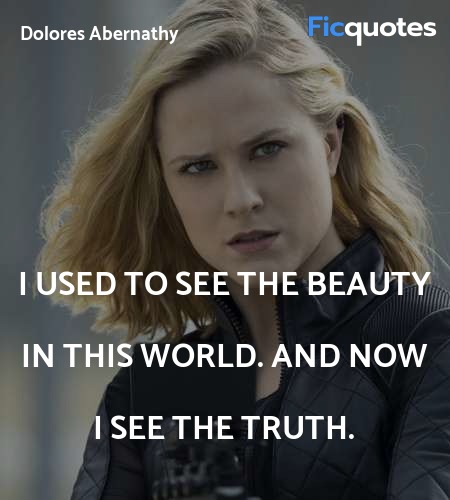 I used to see the beauty in this world. And now I see the truth. 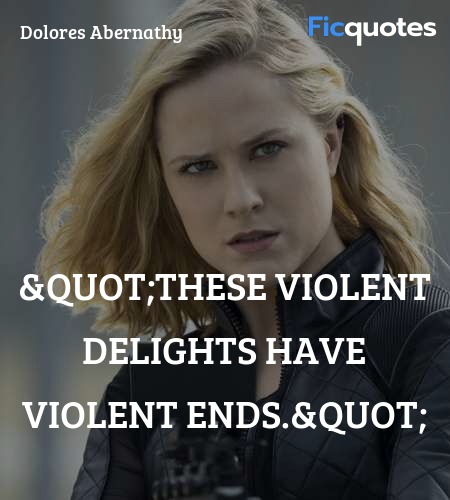 "These violent delights have violent ends." 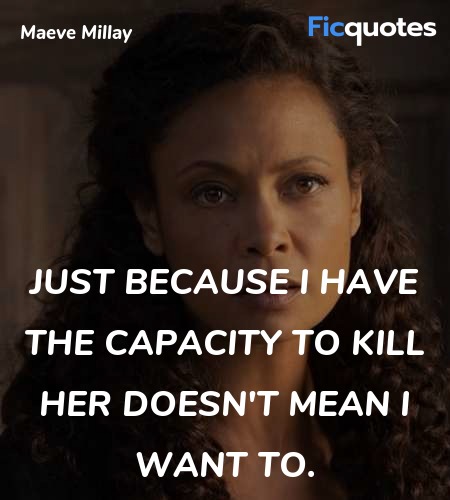 Just because I have the capacity to kill her doesn't mean I want to. 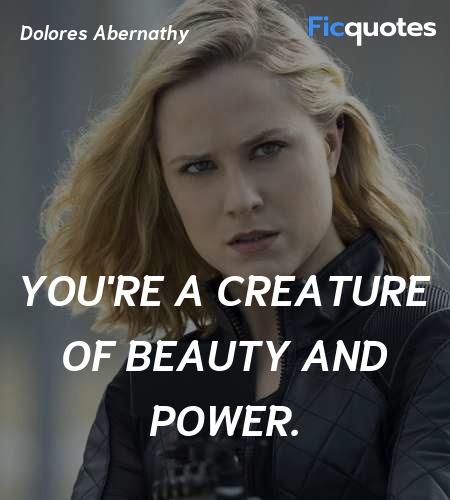 You're a creature of beauty and power.

Lee Sizemore: Fuck me.
Maeve Millay: Not likely, darling. Right now, we've got work to do.

You may not believe in a higher power, but your mind was built to.

Teddy Flood: You changed me. Made me into a monster.
Dolores Abernathy: I made it so you could survive.
Teddy Flood: What's the use of surviving if we become just as bad as them?

Some things are too precious to lose... even to be free.

The truth is, we don't all deserve to make it.

These violent delights have violent ends.

Out. You both keep assuming that I want out. Whatever that is. If it's such a wonderful place out there, why are you all clamoring to get in here?

The longer I work here, the more I think I understand the hosts. It's the human beings who confuse me.

Elsie Hughes: Does that make this a glass-half-full or half-empty type situation?
Bernard Lowe: We're engineers. It means the glass has been manufactured to the wrong specifications.

I guess people like to read about the things that they want the most and experience the least.

Bernard Lowe: So what's the difference between my pain and yours?
Dr. Robert Ford: Between you and me? This was the very question that consumed Arnold, filled him with guilt, eventually drove him mad. The answer always seemed obvious to me. There is no threshold that makes us greater than the sum of our parts, no inflection point at which we become fully alive. We can't define consciousness because consciousness does not exist. Humans fancy that there's something special about the way we perceive the world, and yet we live in loops as tight and as closed as the hosts do, seldom questioning our choices, content, for the most part, to be told what to do next. No, my friend, you're not missing anything at all.

We each deserve to choose our fate. Even if that fate... is death.

Clementine Pennyfeather: Not much of a rind on you. I'll give you a discount.
Maeve Millay: He's not a prospect, Clementine. Can't you tell when a man's just here to gawk at the merchandise?

Dolores Abernathy: He's insane.
Bernard Lowe: What humans define as sane is a narrow range of behaviors. Most states of consciousness are insane.

Man in Black: Welcome back. Looks like a couple of gallons of Lawrence swirling around in you did you good. Ready to get back on the road?
Teddy Flood: Merciful thing would be to put a bullet in me.
Man in Black: Whoever said I was merciful? And it's not my fault you're suffering. You used to be beautiful. When this place started, I opened one of you up once. Million little perfect pieces. And then they changed you. Made you this sad little mess. Flesh and bone just like us. They said it would improve the park experience. But you know why they really did it? It was cheaper. Your humanity is cost-effective. So is your suffering.

Dolores Abernathy: Then they killed them. And then... I ran. Everyone I cared about is gone... and it hurts... so badly.
Bernard Lowe: I can make that feeling go away if you'd like.
Dolores Abernathy: Why would I want that? The pain, their loss... it's all I have left of them. You think the grief will make you smaller inside, like your heart will collapse in on itself, but it doesn't. I feel spaces opening up inside of me, like a building with rooms I've never explored.
Bernard Lowe: That's very pretty, Dolores. Did we write that for you?
Dolores Abernathy: In part. I adapted it from a scripted dialogue about love.

The rich take for granted their money will always be there. That's why they're so easy to steal from.

I lived in Hell, but there's beauty in it.

Some people see the ugliness in this world. The disarray. I was taught to see the beauty. I was taught a lie. And when I saw the world for what it really was, I realized how little beauty there was in in it.

We hope you enjoyed reading Westworld quotes. Browse other tv show quotes on Ficquotes also. If you think we missed any quote from Westworld , please send it to us so we can expand our collection of the best Westworld quotes.