Bad things happen to people around me. 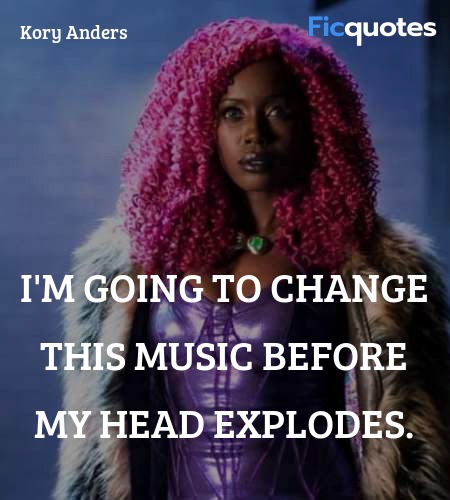 I'm going to change this music before my head explodes. 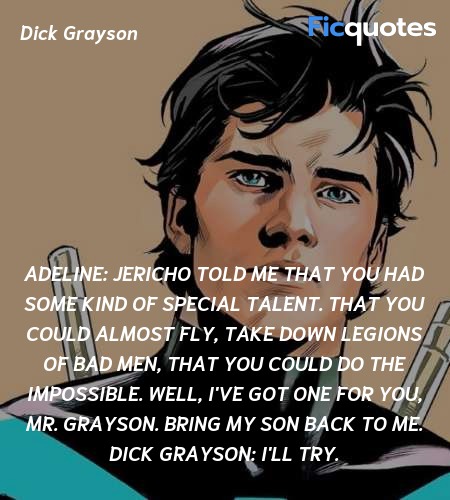 Adeline: Jericho told me that you had some kind of special talent. That you could almost fly, take down legions of bad men, that you could do the impossible. Well, I've got one for you, Mr. Grayson. Bring my son back to me.
Dick Grayson: I'll try. 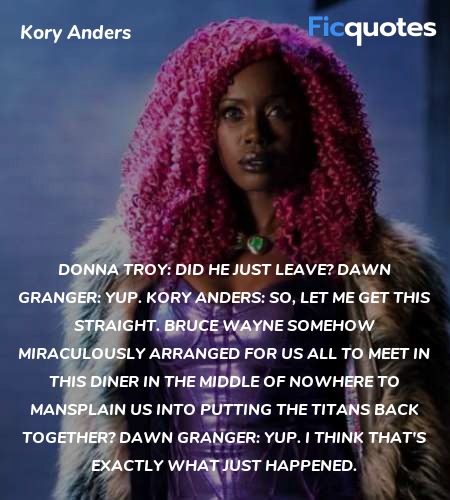 Donna Troy: Did he just leave?
Dawn Granger: Yup.
Kory Anders: So, let me get this straight. Bruce Wayne somehow miraculously arranged for us all to meet in this diner in the middle of nowhere to mansplain us into putting the Titans back together?
Dawn Granger: Yup. I think that's exactly what just happened. 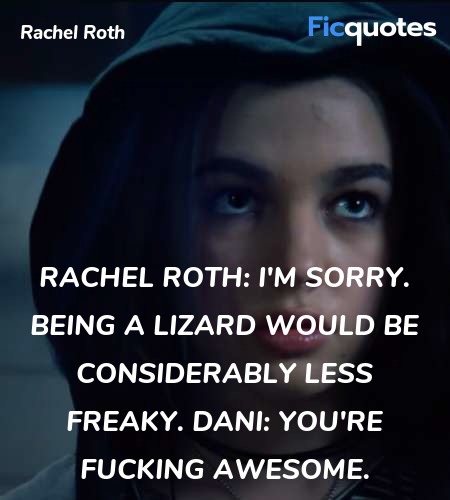 Rachel Roth: I'm sorry. Being a lizard would be considerably less freaky.
Dani: You're fucking awesome.

Hank Hall: Sorry I couldn't fit all 90 candles on there. I tried.
Dick Grayson: My birthday gift to you is that I'm not gonna sing.
Garth: Oh, no. No, no, no, no, no. Come on, I want my Dick Grayson A cappella serenade. Let's go buddy. Make her rip.

I wonder what the Penguin is up to right now?

Dick Grayson: You think you can take my place. You can be Robin after I'm dead.
Jason Todd: If you insist.

Jason Todd: Yo, look, it's been three months, man. When do I get to go back to Gotham City?
Dick Grayson: Bruce doesn't think you're ready yet, and neither do I? I'm sorry, man. You blew your privileges.
Jason Todd: What?
Dick Grayson: The Batmobile joyrides, the motorcycle on the staircase...
Jason Todd: I was practicing my tactical maneuvers.
Dick Grayson: And those websites you bookmarked? You know that's not what the Batcomputer is used for.

Kory Anders: Remove them.
Faddei: A guy travels 20 million miles to give you a lift home, and you want to get royal on me?

Dick Grayson: He was attacked here. Then dragged. Tracks disappear a hundred yards down.
Dawn Granger: He could be anywhere.
Donna Troy: If he's still alive.
Dick Grayson: He's alive. Dr. Light's using him as bait to lure us out. If he was dead, he would have left him here.
Donna Troy: How does that make it any better?
Dick Grayson: I'm not saying it makes it better.
Hank Hall: Back up. So the kid is bait to you now? Is that right? That's rich, Dick.
Dick Grayson: You were bagging on him a minute ago, and now he's your best friend?
Hank Hall: Not about me, pal. This is all because of you and your big, dumb fuckin' idea to start up the Titans again!
Dawn Granger: I'm out.
Donna Troy: Yep, me too.
Hank Hall: What? Where are you going?
Dawn Granger: To get Jason. And for the record, this is all of our faults. Every single one of us. So get over it and move on.

Dick Grayson: You all right?
Jason Todd: All good.
Bruce Wayne: Of course he's all right. Fifteen stories of free-falling probably did him good.
Dick Grayson: It's past midnight. You should probably take it easy.
Jason Todd: I don't want to take it easy. I feel good.
Bruce Wayne: More people should drop their problem children off buildings. It clarifies the mind and body.

Gar Logan: It's uh... little weird if you guys watch me and all. The first time I transformed I tore through my clothes and uh... this is my favorite jacket.
Dick Grayson: Hold on. You have to be naked, too ?
Gar Logan: Yeah, but it'll be worth it! I promise.
Kory Anders: Heard that before.

Dick Grayson: Can we talk?
Dawn Granger: You're about four years too late, but sure.

We hope you enjoyed reading Titans quotes. Browse other tv show quotes on Ficquotes also. If you think we missed any quote from Titans , please send it to us so we can expand our collection of the best Titans quotes.