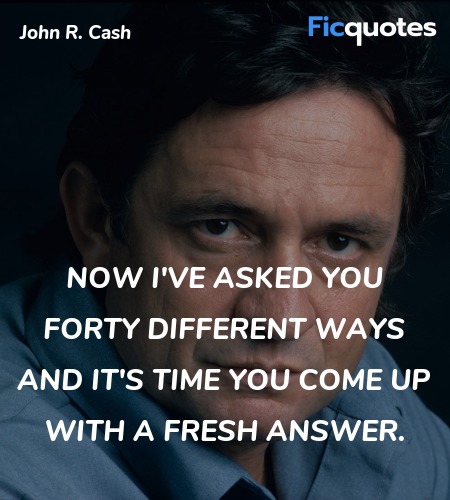 Now I've asked you forty different ways and it's time you come up with a fresh answer. 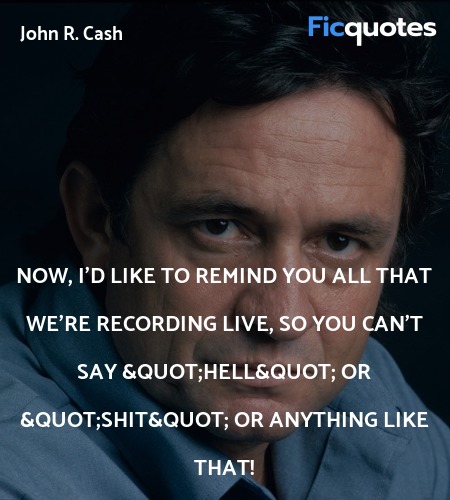 Now, I'd like to remind you all that we're recording live, so you can't say "hell" or "shit" or anything like that! 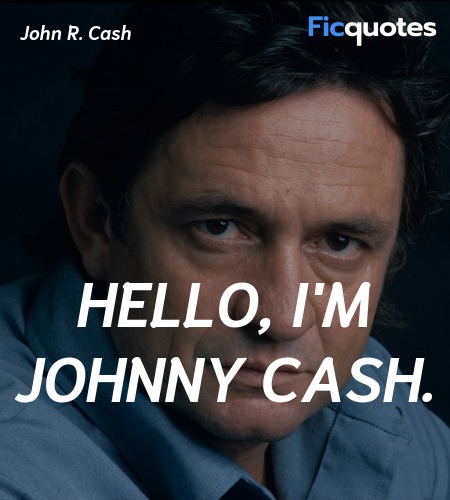 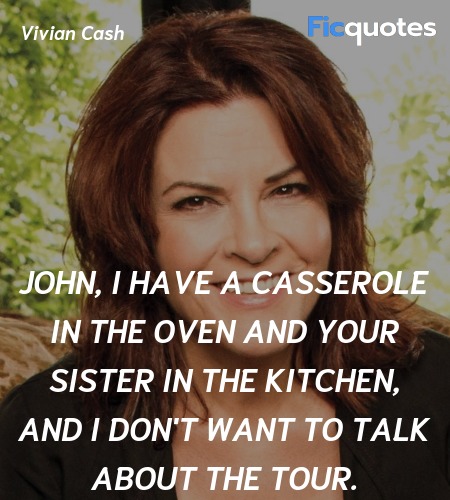 John, I have a casserole in the oven and your sister in the kitchen, and I don't want to talk about the tour.

Ya you're goin' to Jackson, you big talkin' man...

Record Company Executive : Your fans are church folk, Johnny. Christians. They don't wanna hear you singing to a bunch of murderers and rapists, tryin' to cheer 'em up.
Johnny Cash : Well, they're not Christians, then.

That bag over there are letters 10 to 1 from girls. 10 to 1, and they're obscene. Reba's been trying to answer some of them but half of them aint even 15, and they're sending pictures of themselves in bathing suits. Pictures for you to look at while you're doing time at Folsom.

So y'all sit down, squat down or lie down but make yourselves at home 'cause here's the one and only, Mr. Johnny Cash!

You got a hitch in your giddy-up?

It burns. It burns.

It's funny, you know, because I haven't talked about Jack in a long time. After he passed I talked about him all the time. But I guess people grew tired of it... so I just stopped.

This one's for your warden!

You got a library in there June.

Once in El Paso, I had this bag of... Oh... you heard about that? You been in El Paso, too? Well, anyways, I felt tough, you know?. Like I'd seen a thing or two, you know? Well, that was till a moment ago... 'cuz I got to tell you, my hat's off to you now, 'cuz I ain't never had to drink this yellow water you got here at Folsom!

Fortunately I keep my feathers numbered for just such an emergency.

Next time I ask you to marry me, I'm gonna come up with a different way.

Don't give me no rules. All I got are rules.

Sam Phillips : You know exactly what I'm telling you. We've already heard that song a hundred times. Just like that. Just... like... how... you... sing it.
Johnny Cash : Well you didn't let us bring it home.
Sam Phillips : Bring... bring it home? All right, let's bring it home. If you was hit by a truck and you was lying out there in that gutter dying, and you had time to sing one song. Huh? One song that people would remember before you're dirt. One song that would let God know how you felt about your time here on Earth. One song that would sum you up. You tellin' me that's the song you'd sing? That same Jimmy Davis tune we hear on the radio all day, about your peace within, and how it's real, and how you're gonna shout it? Or... would you sing somethin' different. Somethin' real. Somethin' *you* felt. Cause I'm telling you right now, that's the kind of song people want to hear. That's the kind of song that truly saves people. It ain't got nothin to do with believin' in God, Mr. Cash. It has to do with believin' in yourself.
Johnny Cash : I got a couple of songs I wrote in the Air Force. You got anything against the Air Force?
Sam Phillips : No.
Johnny Cash : I do.