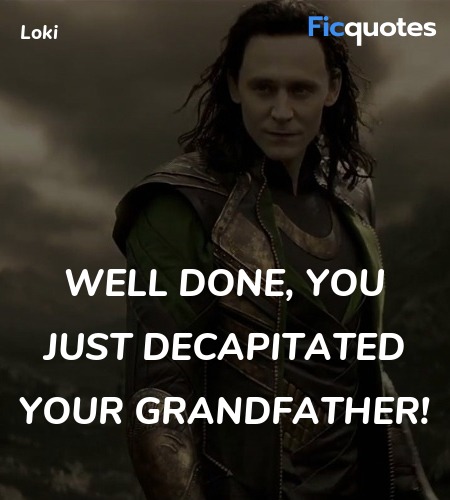 Volstagg : If you even THINK about betraying him...
Loki : You'll kill me? Evidently there will be a line. 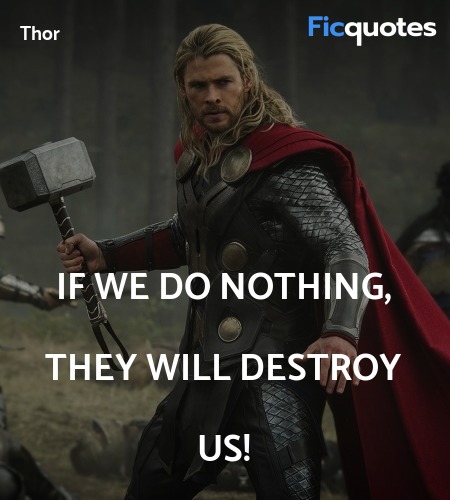 If we do nothing, they will destroy us! 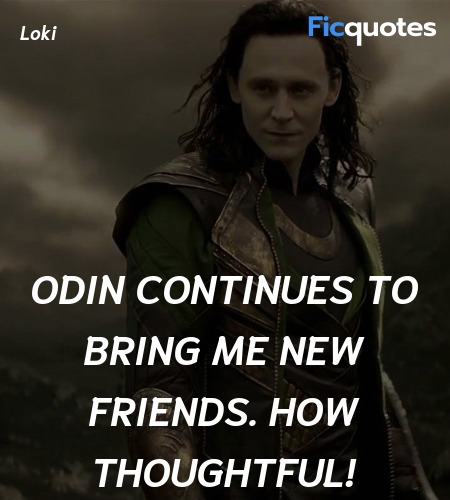 Odin continues to bring me new friends. How thoughtful! 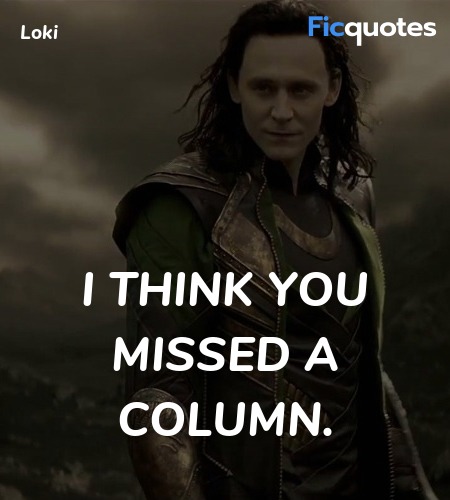 I think you missed a column.

See you in Hel, monster!

Is that how I am to while away eternity... Reading?

It's a different world. Maybe they were different for a reason...

You might want to take the stairs to the left.

We have to do that again!

I gave you my word, that I would return.

Alexander Pierce : I work forty floors away and it takes a hijacking for you to visit?
Nick Fury : Well, a nuclear war would do it too.

Tetradoxine B. Reduces the pulse to one heartbeat a minute. Banner made it for his stress-related issues. It didn't go well for him, but we found uses for it.

If anyone asks for me, tell them I'm right here...

Einherjar Lieutenant :There's no sign of Thor or the Aether. However, we found a body...
Odin : Loki...

This man declined the Nobel Peace Prize. He said that peace is not an achievement but a responsibility. It's stuff like this that gives me trust issues.

Long before the birth of light, there was darkness... and from that darkness came the Dark Elves. Millennia ago, the most ruthless of their kind, Malekith, sought to transform our universe back into one of eternal night. Such evil was possible through the power of the Aether, an ancient force of infinite destruction. The noble armies of Asgard, led by my father King Bor, waged a mighty war against these creatures. As the Nine Worlds converged above him, Malekith could at last unleash the Aether... but Asgard ripped the weapon from his grasp; without it, the Dark Elves fell. With the battle all but lost, Malekith sacrificed his own people in a desperate attempt to lay waste to Asgard's army. Malekith was vanquished and the Aether was no more. Or so we were led to believe.

Her world has its healers. They are called doctors, let them deal with it!

Loki : You know this is wonderful! This a tremendous idea! Let's steal the biggest, most obvious ship in the universe and escape in that! Flying around the city, smash it into everything in sight and everyone will see it! It's brilliant Thor! It's truly brillian...
Fandral : I see your time in the dungeon has made you no less graceful, Loki!
Loki : You lied to me! I'm impressed.

Nick Fury : Why make me head of SHIELD?
Alexander Pierce : Because you're the best. And the most ruthless person I ever met.
Nick Fury : I did what I did to protect people.
Alexander Pierce : Our enemies are your enemies, Nick. Disorder, war. It's just a matter of time before a dirty bomb goes off in Moscow, or an EMP fries Chicago. Diplomacy? Holding action, a band-aid. And you know where I learned that; Bogota. You didn't ask, you just did what had to be done. I can bring order to the lives of seven billion people by sacrificing twenty million. It's the next step, Nick, if you have the courage to take it.
Nick Fury : No, I have the courage not to.
Alexander Pierce : You don't you think we wiped your clearance from the system?
Nick Fury : I know you erased This man declined the Nobel Peace Prize. He said that peace is not an achievement but a responsibility. It's stuff like this that gives me trust issues.my password. Probably deleted my retinal scan. But if you want to stay ahead of me, Mr. Secretary...
Nick Fury : ... you need to keep both eyes open.

Sam Wilson : 41st floor! 41st!
Nick Fury : It's not like they put the floor numbers on the outside of the building.

Heimdall : The universe hasn't seen this marvel since before my watch began. Few can sense it, even fewer can see it. But while its effects can be dangerous, it is truly beautiful.
Thor : I see nothing.
Heimdall : Or, perhaps that is not the beauty you seek.

Sif : I've got this completely under control!
Thor : Is that why everything's on fire?

Sif : All yours...
Thor : Hello
Thor : I accept your surrender.
Thor : Anyone else?
Fandral : Perhaps next time you should start with the big one!

Darcy Lewis : Look at you. Still all muscly and everything!
Thor : ...Thank you.

Thor : Return to your cells, and no harm will come to you! You have my word!
Thor : Very well, you do not have my word.

Heimdall : We need to find a way out of Asgard, to the Dark World. There are paths between the realms known only to a few...
Thor : Known only to ONE, actually.

Thor : How is she?
Heimdall : She's quite clever, your mortal. She doesn't know it yet, but she studies the Convergence as well. Even...
Thor : What?
Heimdall : I can't see her

Malekith : You think you can stop this? The Aether can not be destroyed!
Thor : But YOU can!

Hogun : Where do we go next?
Thor : Hogan, the peace is nearly won across the Nine Realms. You should stay here. Be with your people, where your heart is. Asgard can wait.
Hogun : You have my thanks.
Thor : As you have mine.

Every 5000 years the worlds align, allowing an ancient darkness to strike...

Loki : Malekith! I am Loki of Jotunheim, and I have brought you a gift!
Loki : I only ask for one thing in return; a good seat from which to watch Asgard burn!

Darcy Lewis : I am not getting stabbed in the name of science.
Darcy Lewis : It's OK we're Americans!...
Jane Foster : Is that supposed to make them like us?

Dr. Erik Selvig : This has happened before, thousands of years ago, and the Ancients were there to see it. All the great constructions, the Mayans, the Chinese, the Egyptians. They made use of the gravitational effects of the Convergence. And they left us a map.
Dr. Erik Selvig : Stonehenge, Snowdon, the Great Orme. These are all coordinates taking us... here.
Ian Boothby : Greenwich?
Jane Foster : The walls between worlds will be almost non-existent. Physics is gonna go ballistic. Increases and decreases in gravity, spatial extrusions. The very fabric of reality is gonna be torn apart.
Dr. Erik Selvig : I better get my pants.

Malekith is going to use the Aether to end the universe... but to do so he has to be on Earth to manipulate the Aether! We just have to distract him for enough time till the Convergence has passed!