Even when I had nothing, I had Bucky.

Natasha Romanoff : You're not gonna put me in a prison. You're not gonna put any of us in a prison. You know why?
Committee General : Do enlighten us
Natasha Romanoff : Because you need us. Yes, the world is a vulnerable place, and yes, we helped make it that way. But we're also the ones best qualified to defend it. So if you want to arrest me, arrest me. You'll know where to find me. 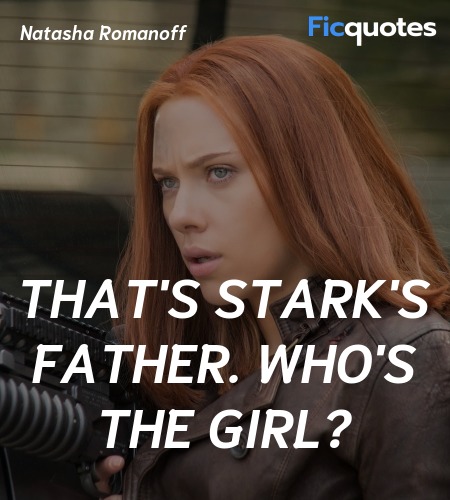 That's Stark's father. Who's the girl?

Sam Wilson : Hey, Cap, how do we know the good guys from the bad guys?
Steve Rogers : If they're shooting at you, they're bad.

Before we get started, does anyone want to get out?

Georges Batroc : I thought you were more than a shield.
Steve Rogers : We'll see.

People are gonna die, Buck. I can't let that happen.

Steve Rogers : Bucky?
The Winter Soldier : Who the hell is Bucky?

Steve Rogers : Attention all S.H.I.E.L.D. agents, this is Steve Rogers. You've heard a lot about me over the last few days. Some of you were even ordered to hunt me down. But I think it's time to tell the truth. S.H.I.E.L.D. is not what we thought it was. It's been taken over by HYDRA. Alexander Pierce is their leader. The S.T.R.I.K.E. and Insight crew are HYDRA as well. I don't know how many more, but I know they're in the building. They could be standing right next to you. They almost have what they want. Absolute control. They shot Nick Fury. And it won't end there. If you launch those helicarriers today, HYDRA will be able to kill anyone that stands in their way. Unless we stop them. I know I'm asking a lot. But the price of freedom is high. It always has been. And it's a price I'm willing to pay. And if I'm the only one, then so be it. But I'm willing to bet I'm not.
Sam Wilson : Did you write that down first, or was it off the top of your head?

Sam Wilson : You're going after him.
Steve Rogers : You don't have to come...
Sam Wilson : I know. When do we start?

Steve Rogers : Arnim Zola was a German scientist who worked with the Red Skull. He's been dead for years.
Dr. Arnim Zola : First correction, I am Swiss. Second, look around you, I have never been more alive! In 1972, I received a terminal diagnosis. Science could not save my body. My mind, however, that was worth saving... on two hundred thousand feet of data banks! You are standing in my brain! 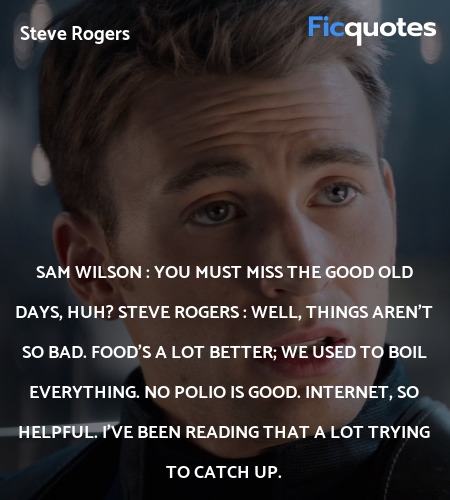 Sam Wilson : You must miss the good old days, huh?
Steve Rogers : Well, things aren't so bad. Food's a lot better; we used to boil everything. No polio is good. Internet, so helpful. I've been reading that a lot trying to catch up.

Steve Rogers : What were you doing on the Lemurian Star?
Jasper Sitwell : Throwing up. I get seasick.

Sam Wilson : You're a lot heavier than you look.
Steve Rogers : I had a big breakfast.

Dr. Arnim Zola : HYDRA was founded on the belief that humanity could not be trusted with its own freedom. What we did not realize was that if you tried to take that freedom, they resist. The war taught us much. Humanity needed to surrender its freedom willingly. After the war, S.H.I.E.L.D. was founded, and I was recruited. The new HYDRA grew, a beautiful parasite inside S.H.I.E.L.D. For 70 years, HYDRA has been secretly feeding crises, reaping war. And when history did not cooperate, history was changed.
Natasha Romanoff : That's impossible. S.H.I.E.L.D. would've stopped you.
Dr. Arnim Zola : Accidents will happen. HYDRA created a world so chaotic that humanity is finally ready to sacrifice its freedom to gain its security. Once the purification process is complete, HYDRA's New World Order will arise. We won, Captain. Your death amounts to the same as your life, a zero sum!

Natasha Romanoff : After WWII, S.H.I.E.L.D. recruited German scientists with strategic value.
Dr. Arnim Zola : So I could help their cause. I also helped my own.
Steve Rogers : HYDRA died with the Red Skull.
Dr. Arnim Zola : Cut off one head, two more shall take its place.