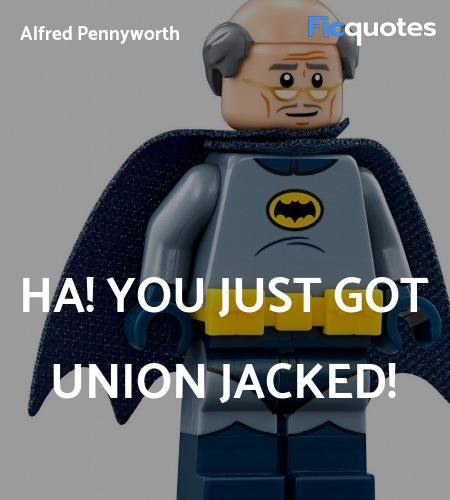 Ha! You just got union jacked! 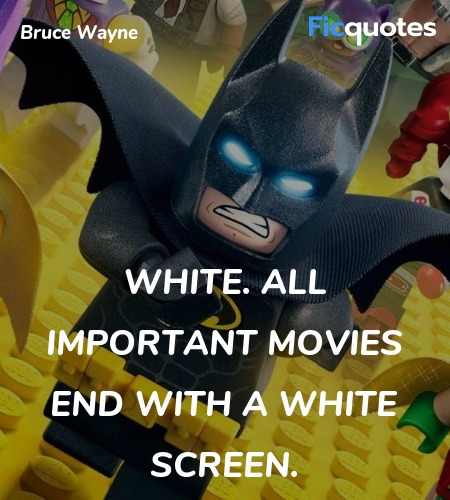 White. All important movies end with a white screen. 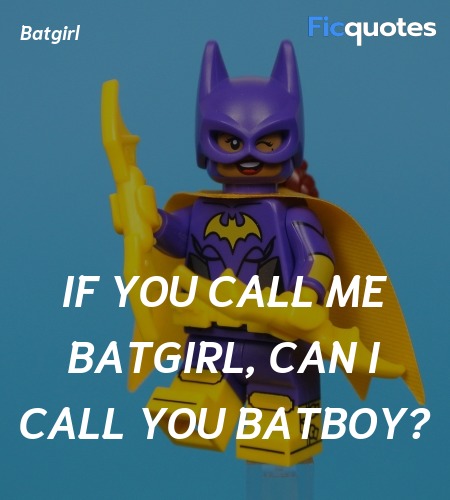 If you call me Batgirl, can I call you Batboy? 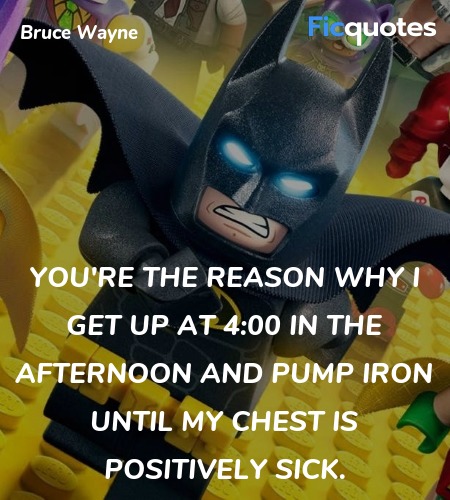 You're the reason why I get up at 4:00 in the afternoon and pump iron until my chest is positively sick.

I deserve this today, today I deserve it.

What am I gonna do? Get a bunch of criminals together to fight the criminals? That's a stupid idea.

Computer : What is the password?
Batman : Iron Man sucks.

Batman : All righ, kid. We need to avoid Commissioner Gordon. So, lesson number three. When going stealth, you gotta hide every part of you, physically and emotionally. Got it?
Robin : Yeah!

Batman : So, are you ready to follow Batman and maybe learn a few life lessons along the way?
Robin : I sure am, Dad Two! But first, where's the seat-belt?
Batman : The first lesson is, life doesn't give you seat-belts! Let's go!

Robin : Hey, I was thinking. If I'm gonna be a superhero, and go on awesome superhero missions like this one, can we use code names? Mine can be Robin.
Batman : I'm sorry, say that again?
Robin : Robin.
Batman : As in the small, Midwestern frail bird?
Robin : Yeah, and I already have a catch phrase. Tweet, tweet, on the street.
Batman : Hard pass.
Robin : And a song.
Robin : Fly, Robin, fly.
Batman : Harder pass.

Hey mom, hey dad, I um, I saved the city again today, I think you would have been really proud.

Robin : My name's Richard Grayson, but all the kids at the orphanage call me Dick.
Batman : Well, children can be cruel.

Black. All important movies start with a black screen... And music... Edgy, scary music that would make a parent or studio executive nervous... And logos... Really long and dramatic logos... Warner Bros. Why not "Warner Brothers"? I don't know... DC... The house that Batman built. Yeah, what, Superman? Come at me, bro. I'm your Kryptonite... Hmm... Not sure what RatPac does, but that logo is macho. I dig it... Okay. Get yourself ready for some... reading. "If you want to make the world a better place, take a look at yourself and make a change. Hooo." No. I said that. Batman is very wise. I also have huge pecs and a nine-pack. Yeah, I've got an extra ab. Now, let's start the movie.

Okay, Robin. Together, we're gonna punch these guys so hard, words describing the impact are gonna spontaneously materialize out of thin air.

Batman : Hey, 'puter, I'm home.
Computer : Welcome home, sir. Initializing Batcave music. So, did anything exciting happened today?
Batman : I saved the city again. It was off the chain. Anyway, I should probably have some grub.
Computer : Alfred left your lobster thermidor in the fridge.
Batman : Oh, that's my favorite. I can't wait.
Batman : Not 20 minutes. Stupid.

Barbara Gordon : Why did you build this thing with only one seat?
Batman : 'Cause last time I checked, I only have one butt.

The Joker : Are you seriously saying there is nothing, nothing special about our relationship?
Batman : Whoa. Let me tell you something, J-bird. Batman doesn't do 'ships.
The Joker : What?
Batman : As in "relationships." There is no "us." Batman and Joker are not a thing. I don't need you. I don't need anyone. You mean nothing to me. No one does.