Directed by: George Lucas
Written by: George Lucas
Starring: Mark Hamill, Harrison Ford, Carrie Fisher
Released on: May 25, 1977
Taglines: It's Back! The Force will be with you for three weeks only. 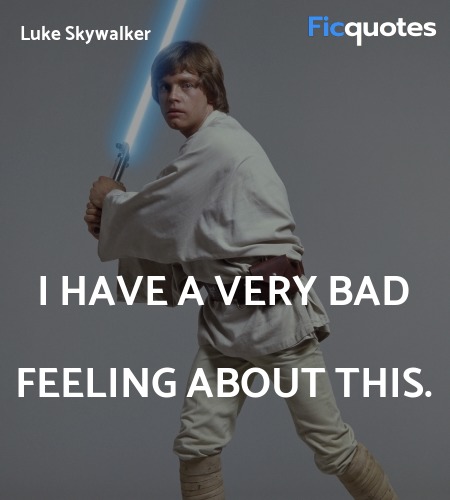 I have a very bad feeling about this. 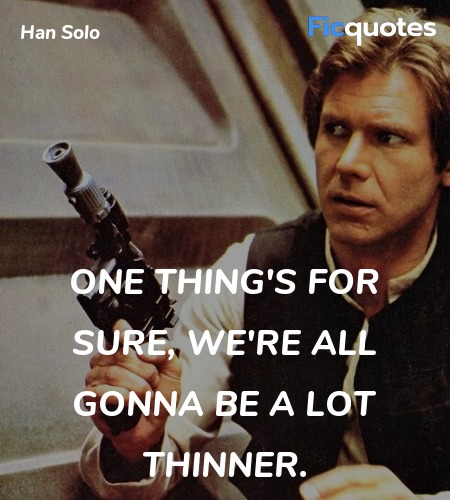 One thing's for sure, we're all gonna be a lot thinner. 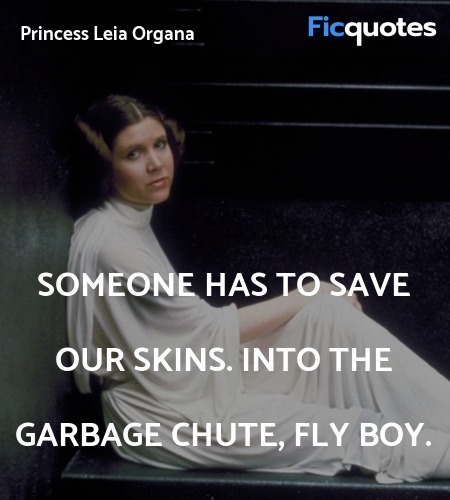 Someone has to save our skins. Into the garbage chute, fly boy. 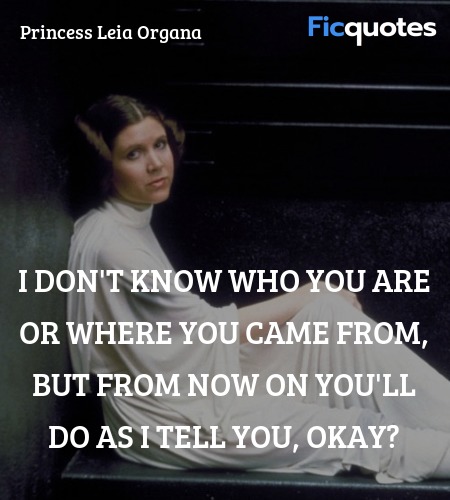 I don't know who you are or where you came from, but from now on you'll do as I tell you, okay?

Help me, Obi-Wan Kenobi; you're my only hope.

Get in there, you big furry oaf! I don't care what you smell!

Hokey religions and ancient weapons are no match for a good blaster at your side, kid.

Wonderful girl. Either I'm going to kill her or I'm beginning to like her.

I'm not such a bad pilot myself.

If there's a bright center to the universe, you're on the planet that it's farthest from.

Han Solo : Uh, everything's under control. Situation normal.
Voice : What happened?
Han Solo Uh, we had a slight weapons malfunction, but uh... everything's perfectly all right now. We're fine. We're all fine here now, thank you. How are you?
Voice : We're sending a squad up.
Han Solo : Uh, uh... negative, negative. We had a reactor leak here now. Give us a few minutes to lock it down. Large leak, very dangerous.
Voice : Who is this? What's your operating number?
Han Solo : Uh...
Han Solo : Boring conversation anyway. LUKE, WE'RE GONNA HAVE COMPANY!

Great shot, kid, that was one in a million!

Princess Leia Organa : General Kenobi. Years ago you served my father in the Clone Wars. Now he begs you to help him in his struggle against the Empire. I regret that I am unable to present my father's request to you in person, but my ship has fallen under attack, and I'm afraid my mission to bring you to Alderaan has failed. I have placed information vital to the survival of the Rebellion into the memory systems of this R2 unit. My father will know how to retrieve it. You must see this droid safely delivered to him on Alderaan. This is our most desperate hour. Help me, Obi-Wan Kenobi. You're my only hope.
Ben Obi-Wan Kenobi : You must learn the ways of the Force, if you're to come with me to Alderaan.
Luke Skywalker : Alderaan? I'm not going to Alderaan, I've gotta get home, it's late, I'm in for it as it is!
Ben Obi-Wan Kenobi : I need your help, Luke. She needs your help. I'm getting too old for this sort of thing.
Luke Skywalker : Look, I can't get involved. I've got work to do. It's not that I like the Empire; I hate it, but there's nothing I can do about it right now... It's all such a long way from here.
Ben Obi-Wan Kenobi : That's your uncle talking.

Sure hope the old man got that tractor beam out of commission, or this is gonna be a real short trip. Okay, hit it!

Han Solo : Well, you can forget your troubles with those Imperial slugs. I told you I'd outrun 'em.
Han Solo : Don't everyone thank me at once.

Jabba, you're a wonderful human being.

You're all clear, kid. Now let's blow this thing and go home!

Luke Skywalker : How did my father die?
Ben Obi-Wan Kenobi : A young Jedi named Darth Vader, who was a pupil of mine until he turned to evil, helped the Empire hunt down and destroy the Jedi knights. He betrayed and murdered your father. Now the Jedi are all but extinct. Vader was seduced by the dark side of the Force.

I knew there was more to you than money.