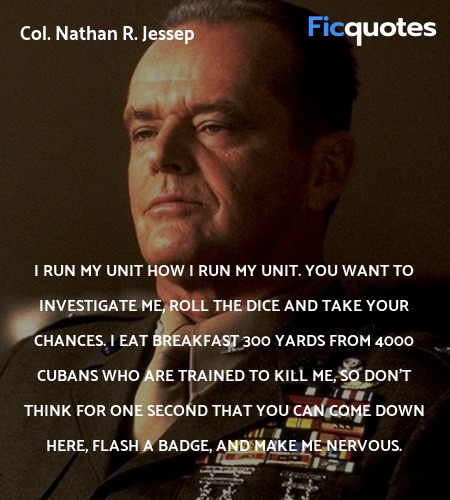 I run my unit how I run my unit. You want to investigate me, roll the dice and take your chances. I eat breakfast 300 yards from 4000 Cubans who are trained to kill me, so don't think for one second that you can come down here, flash a badge, and make me nervous. 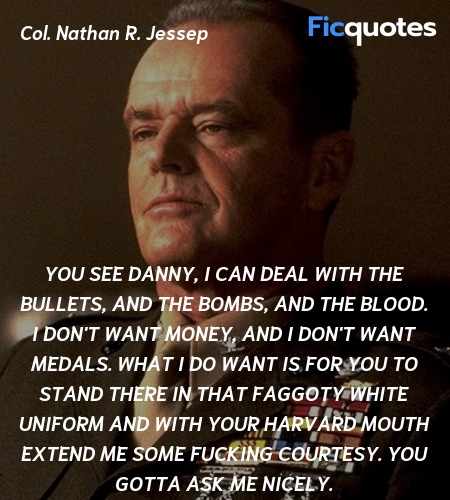 You see Danny, I can deal with the bullets, and the bombs, and the blood. I don't want money, and I don't want medals. What I do want is for you to stand there in that faggoty white uniform and with your Harvard mouth extend me some fucking courtesy. You gotta ask me nicely. 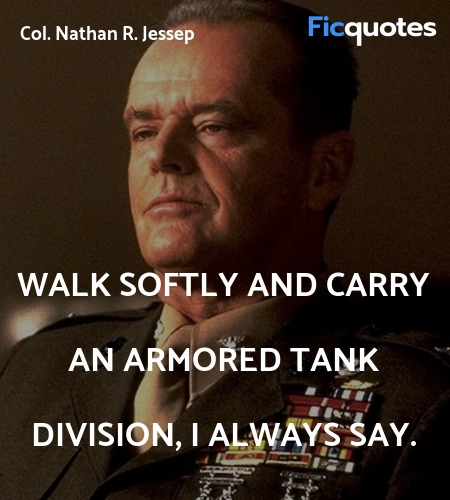 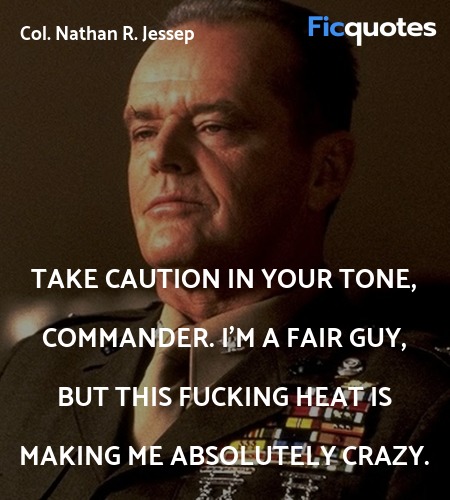 Take caution in your tone, Commander. I'm a fair guy, but this fucking heat is making me absolutely crazy.

Do you solemnly swear that the testimony you'll give this general court martial will be the truth, the whole truth, and nothing but the truth so help you God?

Oh, hah, I'm sorry, I keep forgetting. You were sick the day they taught law at law school.

Dr. Stone you've held the license to practice medicine for seventeen years, your board certified in internal medicine, you are Chief of Internal Medicine at a hospital which serves five thousand, four hundred and twenty six people. In your professional medical opinion, was Willie Santiago poisoned?

I'm sorry I cost you your steak knives.

Is the colonel's underwear a matter of national security?

Maybe, if we work at it, we can get Dawson charged with the Kennedy assassination.

What do you wanna discuss now? My favorite color?

Kaffee : Harold.
Dawson : Sir?
Kaffee : You don't need to wear a patch on your arm to have honor.
Dawson : Ten-hut!
Dawson : There's an officer on deck.

Kaffee : How's it going, Luther?
Luther : Another day, another dollar, captain.
Kaffee : You gotta play them as they lay.
Luther : What goes around comes around.
Kaffee : Can't beat 'em, join 'em.
Luther : At least I got my health.
Kaffee : Well, then you got everything... See you tomorrow, Luther.
Luther : Not if I see you first.

with Sam and Joanne present] Why does a Lieutenant Junior Grade with nine months' experience and a track record for plea bargaining get assigned to a murder case? Would it be so it never sees the inside of a courtroom?

Capt. Ross : Your honor, it's become obvious that Lt. Kaffee's intention this afternoon are to smear a high ranking Marine officer in the desperate hope that the mere appearance of impropriety will win him points with the court members. Now, it is my recommendation, sir, that Lt. Kaffee be reprimanded for his conduct and that this witness be excused with the court's deepest apologies.
Judge Randolph : Overruled.
Capt. Ross : Your honor...
Judge Randolph : Your objection is noted.

You're wrong. I do know you. Daniel Alister Kafffee, born June 8, 1964 at Boston Mercy hospital. Your father is Lionel Kaffee, former Navy Judge Advocate and Attorney General of the United States, died 1985. You went to Harvard Law school then you joined the Navy, probably because that's what your father wanted you to do, and now you're just treading water for three years. You've got to serve in the JAG Corps, just kind of laying low until you can go out and get a real job. If that's the situation, that's fine. I won't tell anyone.

Galloway : Why do you hate them so much?
Lt. Weinberg : They beat up on a weakling; that's all they did. The rest is just smokefilled coffee-house crap. They tortured and tormented a weaker kid. They didn't like him. So, they killed him. And why? Because he couldn't run very fast.

Lt. Weinberg : Why do you like them so much?
Galloway : Because they stand on a wall and say, "Nothing's going to hurt you tonight, not on my watch."

There was no poison on the rag and there was no intent to kill, and any attempt to prove otherwise is futile because it just isn't true. When Dawson and Downey entered Santiago's room that night, it wasn't because of vengeance or hatred; it wasn't to kill or harm. And it wasn't because they were looking for "kicks" on a Friday night. It was what they were ordered to do. Let me say that again, *it was what they were ordered to do*. Out in the real world, it means nothing, and in the Washington navy yard it doesn't mean a whole lot more, but if you're a marine assigned rifle company Windward Guantánamo Bay Cuba, if you're given an order you follow it or you pack your bags. Make no mistake about it, Harold W. Dawson and Private Louden Downey are sitting before you today because they did their job.

We'll work out of my apartment 7 o'clock. Jo, before you come over tonight, pick up a carton of legal pads half a dozen boxes red and black pens half a dozen boxes. Sam get a couple desk lamps, I need you to start on preliminary medical profile, and Jo, we need all the proficiency and conduct reports on Dawson, Downey and Santiago.

They drew the court members this afternoon. Seven men, two women, five Navy, four Marines. All officers with line experience. Neither of the women have children. So that's a bad break. There 's nothing we can do. My father always said a jury trial is not just about the law. It's about "assigning blame". Santiago's dead, and he shouldn't be. These nine people are going to insist that someone be "blamed" for that. Ross is handing them our clients. We're gonna hand them Kendrick. This is about a sales pitch. It's not going to won by the law, It's gonna be won by the lawyers. So remember, poker faces. Don't flinch in front of the court members. Something doesn't go our way, don't hang your head, don't shift in your seat, don't scribble furiously. Whatever happens, you have to look like it's exactly what you knew would happen. If you pass me documents, Do it swiftly and don't look over anxious.

The only thing I have to eat is Yoohoo and Cocoa Puffs, so if you want anything else bring it with you. Okay?

All right, take the night off. We've been working twenty hours a day for three and half weeks straight just take the night off, Sam go see your wife and your daughter, Jo go do... whatever it is you do when you're not here.

Oh, now I see what you're saying. It had to be Professor Plum in the library with the candlestick.

Whatever happened to saluting an officer when he leaves the room?