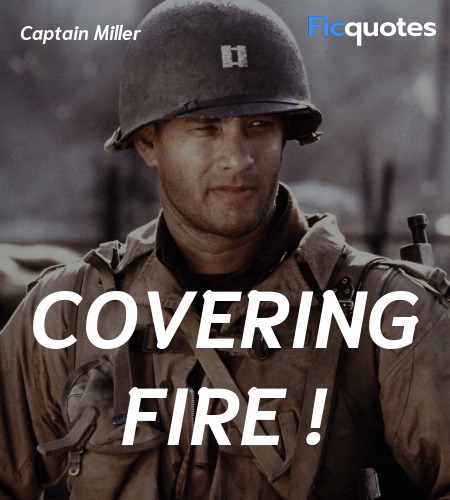 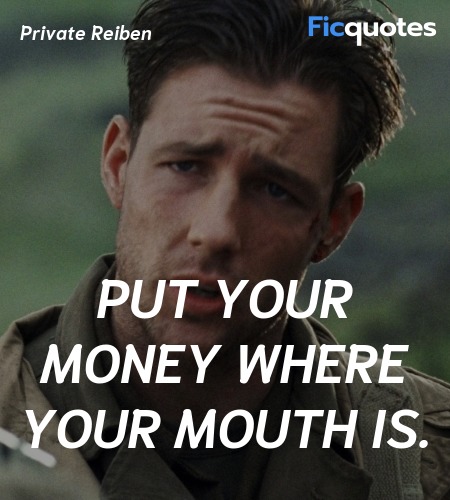 Put your money where your mouth is. 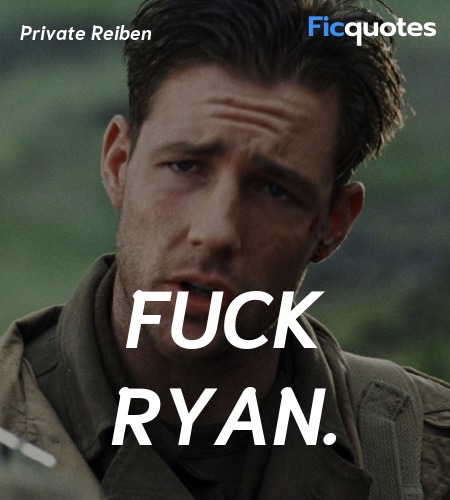 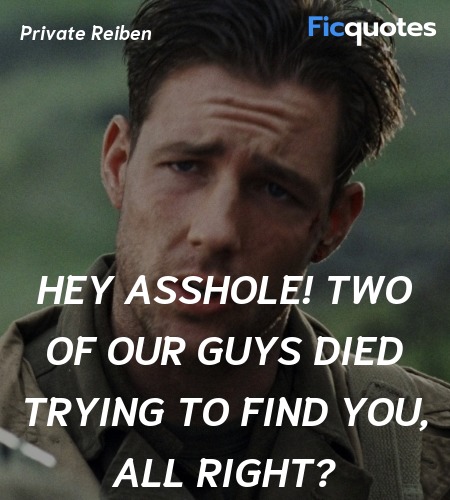 Hey asshole! Two of our guys died trying to find you, all right?

I don't know. Part of me thinks the kid's right. He asks what he's done to deserve this. He wants to stay here, fine. Let's leave him and go home. But then another part of me thinks, what if by some miracle we stay, then actually make it out of here. Someday we might look back on this and decide that saving Private Ryan was the one decent thing we were able to pull out of this whole godawful, shitty mess. Like you said, Captain, maybe we do that, we all earn the right to go home.

We are not here to do a decent thing, we are here to follow fuckin' orders!

THIS is why we don't pick up children!

It's like finding a needle in a stack of needles.

Keep the sand out of your weapons. Keep those actions clear. I'll see you on the beach.

The world has taken a turn for the surreal.

He better be worth it. He better go home and cure a disease, or invent a longer-lasting light bulb.

This time the mission is the man.

Captain Miller : I'm a schoolteacher. I teach English composition... in this little town called Adley, Pennsylvania. The last eleven years, I've been at Thomas Alva Edison High School. I was a coach of the baseball team in the springtime. Back home, I tell people what I do for a living and they think well, now that figures. But over here, it's a big, a big mystery. So, I guess I've changed some. Sometimes I wonder if I've changed so much my wife is even going to recognize me, whenever it is that I get back to her. And how I'll ever be able to tell her about days like today. Ah, Ryan. I don't know anything about Ryan. I don't care. The man means nothing to me. It's just a name. But if... You know if going to Rumelle and finding him so that he can go home. If that earns me the right to get back to my wife, then that's my mission.
Captain Miller : You want to leave? You want to go off and fight the war? All right. All right. I won't stop you. I'll even put in the paperwork. I just know that every man I kill the farther away from home I feel.

Private Ryan : Hell, these guys deserve to go home as much as I do. They've fought just as hard.
Captain Miller : Is that what I'm supposed to tell your mother when she gets another folded American flag?
Private Ryan : You can tell her that when you found me, I was with the only brothers I had left. And that there was no way I was deserting them. I think she'd understand that.