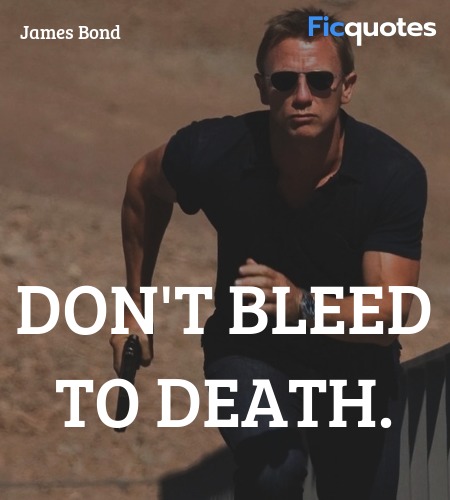 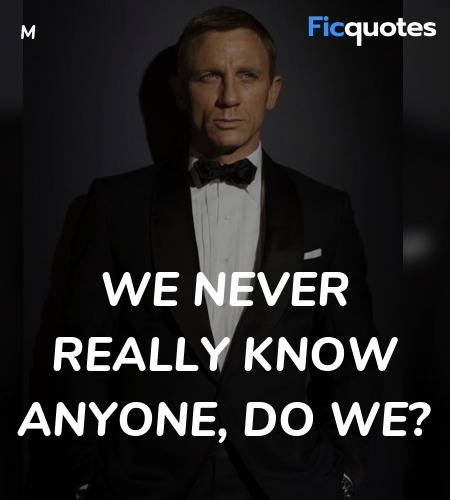 We never really know anyone, do we? 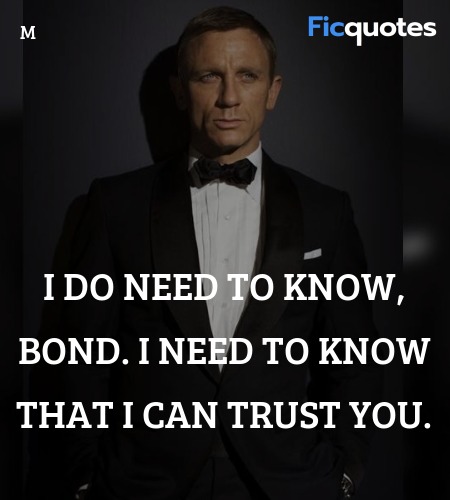 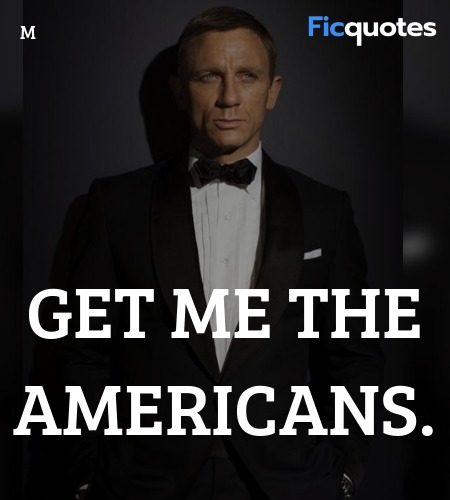 Get me the Americans.

Restrict Bond's movement. Cancel his cards. Put an alert on his passports. All of them.

Tell me, you didn't drop by tonight just to piss on my parade?

Be careful what you wish for, my dear.

I don't think the dead care about vengeance.

When one's young, it seems very easy to distinguish between right and wrong. But, as one gets older, it becomes more difficult. The villains and the heroes get all mixed up.

You want your country back. My organization can give it to you within - a week.

Can I offer an opinion? I really think you people should find a better place to meet.

They say you're judged by the strength of your enemies.

There is nothing that makes me more uncomfortable than friends talking behind my back. Feels like... ants under my skin.

How much do you know about Bond, Camille? Because he's rather a tragic case. As MI6 says, he's difficult to control. Nice way of saying that everything he touches seems to wither and die.

When someone says "We've got people everywhere", you expect it to be hyperbole! Lots of people say that. Florists use that expression. It doesn't mean that they've got somebody working for them inside the bloody room!

Who the hell is this organisation Bond? How can they be everywhere and we know nothing about them!

It'd be a pretty cold bastard who didn't want revenge for the death of someone he loved.

You two do make a charming couple, though. You're both, what's the expression? Damaged goods.

I was sorry to hear about Vesper. I think she loved you.


Look how well your charm works, James. They'll do anything for you, won't they?

I don't give a shit about the CIA or their trumped up evidence. He's my agent - and I trust him.

Vesper, she would give everything for you. Forgive her. Forgive yourself.

What do you want? Have you come to apologise?

Mathis : This man had me imprisoned and tortured and you want to serve him fine wine?
Gemma : You only buy cheap wine. And since you were innocent, they bought you this villa. So really, you owe him, don't you?
Mathis : Gemma, go work on your tan.

James Bond : Sit do
James Bond : You're Canadian...? You work in Canadian intelligence?
James Bond : That's all right... I know you do. And knowing this man, you likely have access to some very sensitive material that you're going to be forced to give up. His life will be threatened... and because you love him, you won't hesitate.
James Bond : That's a beautiful necklace. Did he give it to you?
James Bond : I have one just like it. He gave it to a friend of mine... someone very close to me. Your name is...?
Corinne : Corinne.
James Bond : Corinne... Corinne, I suggest you leave now. You contact your people, and you tell them to check their seals. They have a leak. Do it now, please. This man and I have some unfinished business.
Corinne : Thank you.
Yusef : Please. Make it quick.

Its time to get out.

James Bond : You know I was just wondering what South America would look like if nobody gave a damn about coke or communism. It always impressed me the way you boys would carve this place up.
Felix Leiter : I'll take that as a compliment coming from a Brit.

James Bond : I bet you make it 20 miles before you consider drinking that.
James Bond : Goodbye, Mr. Greene.

James Bond : How long have I got?
Felix Leiter : Thirty seconds.
James Bond : That doesn't give us a lot of time...

Have you ever killed someone? - - The training will tell you that when the adrenaline kicks in you should compensate. But, part of you's not going to believe the training; because, this kill is personal. Take a deep breath. You only nee one shot. Make it count.

James Bond : Are you going to tell us who you work for?
Mr. White : I was always very interested to meet you. I heard so much about you from Vesper. The real shame is, if she hadn't killed herself we would've had you too

You and I had a mutual friend!

I think I found a way out.

James Bond : Are you sure you're playing with the right side?
Felix Leiter : Regimes change once a week down here.

James Bond : That's what I like about US intelligence. You'll lie down with anybody.
Felix Leiter : Including you, brother. Including you.

Do you know you're being played?

Everything he touches withers and dies.

Camille : Friend of yours?
James Bond : I don't have any friends.

Camille : How much did he want?
James Bond : He wanted you but I left the car as collateral. He'll get much more when he sells us out.

There is something horribly efficient about you.

Camille : You're late!
James Bond : Got pulled into a meeting.

Camille : So, its British Intelligence now. What the hell do you want from me?
James Bond : You're going to show me Dominic Greene's Tierra Project. Are you up to it?
Camille : Do I have a choice?
James Bond : Do you want one?

Camille : Get in.
James Bond : You gonna try and shoot me?
Camille : I said, get in.

You should know something about me and the people i work with. We deal with the left or the right, with dictators or liberators. If the current President had been more agreeable, I wouldn't be talking to you. So, if you decide not to sign, you will wake up with your balls in your mouth and your willing replacement standing over you. If you doubt that, then shoot me, take that money and have a good night's sleep.

This is the world's most precious resource, we need to control as much of it as we can.