Once Upon a Time in the West Quotes

Best Once Upon a Time in the West Movie Quotes

Once Upon a Time in the West

Once Upon a Time in the West Quotes 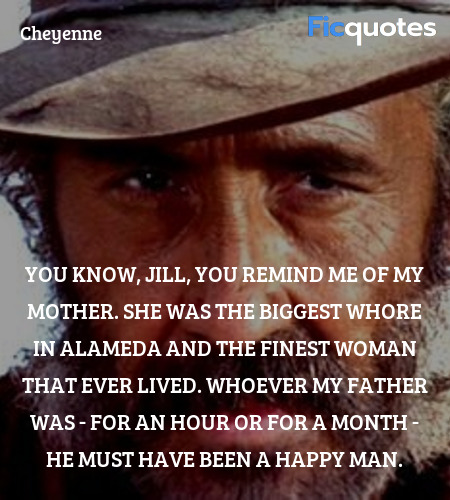 You know, Jill, you remind me of my mother. She was the biggest whore in Alameda and the finest woman that ever lived. Whoever my father was - for an hour or for a month - he must have been a happy man. 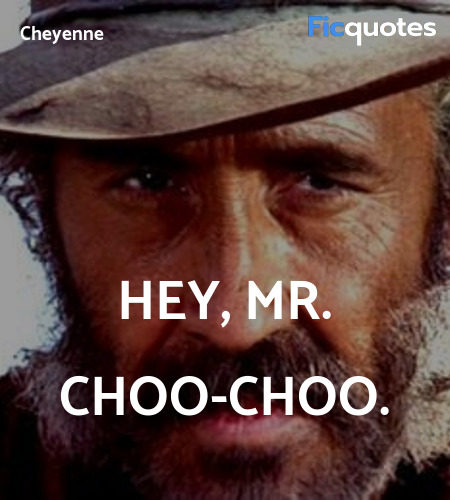 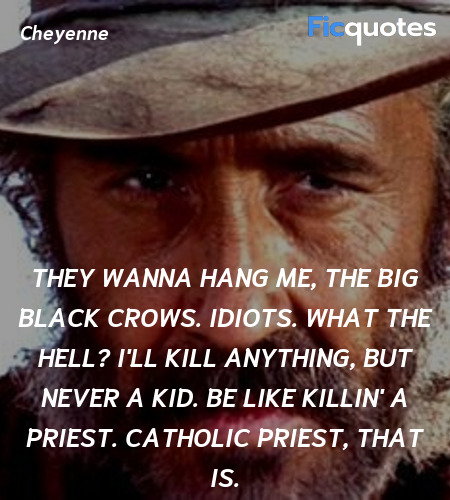 They wanna hang me, the big black crows. Idiots. What the hell? I'll kill anything, but never a kid. Be like killin' a priest. Catholic priest, that is. 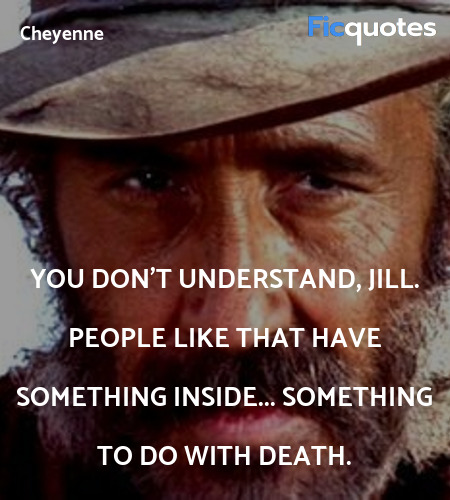 You don't understand, Jill. People like that have something inside... something to do with death.

You've made a big mistake, Morton. When you're not on that train, you look like a turtle out of its shell. It's funny. Poor cripple talkin' big so nobody'll know how scared ya are.

When you hear a strange sound, drop to the ground.

Morton: Is that sufficient to make you feel stronger?
Frank: I could squash you like a wormy apple.
Morton: Sure, but you won't do it... because it's not to... your advantage.
Frank: Hmm. Who knows how far you'd have gone with two good legs, huh?

Morton: I got on board within sight of the Atlantic, and before my eyes close I want to see the blue of the Pacific outside that window.
Frank: I know where you got on. I was there too remember? To remove small obstacles from the track you said. Well there were a few.

Frank: You paid five thousand dollars for something belongs to me.
Frank: Five thousand...
Frank: ...plus one.
Frank: You got a right to make a profit, too.

Morton: You'll never succeed in becoming like me.
Frank: Why?
Morton: Because there are many things you'll never understand.
Morton: This is one of 'em. You see, Frank, there are many kinds of weapons, and the only one that can stop that is this.
Morton: Now, shall we get back to our little problem?
Frank: My weapons might look simple to you, Mr. Morton, but they can still shoot holes big enough for our little problems.

Make believe it's nothing.

Morton: How does it feel sitting behind that desk, Frank?
Frank: It's almost like holding a gun... only much more powerful.

Time sure flies. It's already past twelve.

How can you trust a man that wears both a belt and suspenders? Man can't even trust his own pants.

Morton: Not bad. Congratulations. Tell me, was it necessary that you kill all of them? I only told you to scare them!
Frank: People scare better when they're dyin'.

You know, ma'am, when you've killed four, it's easy to make it five.

Good. My mother used to make coffee this way - hot, strong, and good.

Jill: If you want to, you can lay me over the table and amuse yourself, and even call in your men. Well, no woman ever died from that. When you're finished, all I'll need will be a tub of boiling water and I'll be exactly what I was before - with just another filthy memory!
Cheyenne: You make good coffee, at least?

Yeah, go on. Play, Harmonica. Play, so you can't bullshit.

You know what? If I was you, I'd go down there and give those boys a drink. Can't imagine how happy it makes a man to see a woman like you, just to look at her. And if one of them should, uh, pat your behind, just make believe it's nothing. They earned it.

By the way, you know anything about a man going around playing the harmonica? He's somebody you'd remember. Instead of talking, he plays. And when he better play, he talks.

Jill: Cheyenne.
Cheyenne: Huh?
Jill: What's he waiting for out there? What's he doing?
Cheyenne: He's whittling on a piece of wood. I got a feeling, when he stops whittling, something's gonna happen.

Jill: I could swear we're going to have that strange sound.
Harmonica: Right now.

You wake up one morning and say "World, I know you. From now on there are no more surprises," and then you happen to meet a man like this, who looked like a good man - clear eyes, strong hands - and he wants to marry you, which doesn't happen often, and he says he's rich, too, which doesn't hurt.

Cheyenne: You deserve better.
Jill: The last man who told me that... is buried out there.

Jill: Hey, you're sort of a handsome man.
Cheyenne: But I'm not the right man. And neither is he.

Jill: But... but they were his men.
Harmonica: Yeah.
Jill: And they tried to kill him.
Harmonica: They must've found somebody who pays better.
Jill: And YOU! You saved his life.
Harmonica: I didn't let them kill him, and that's not the same thing.