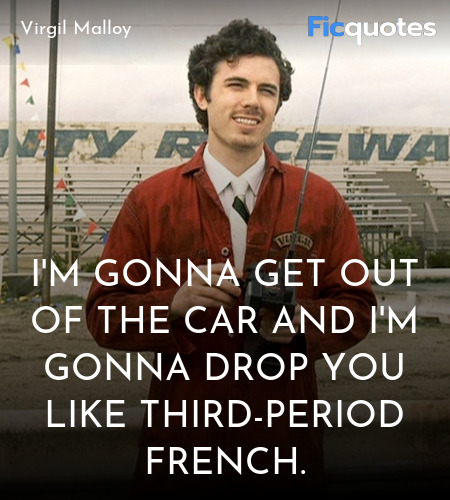 I'm gonna get out of the car and I'm gonna drop you like third-period French. 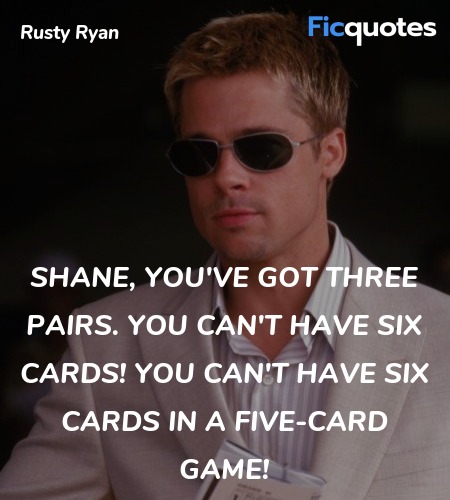 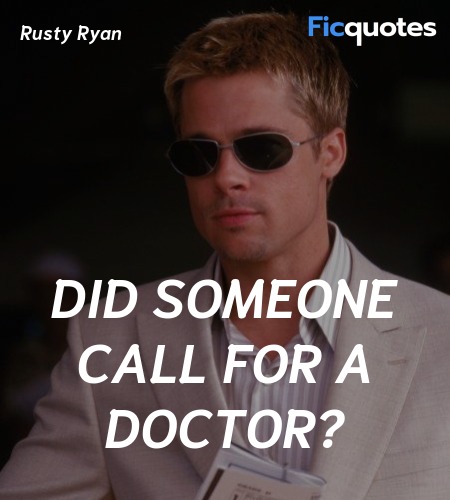 Did someone call for a doctor?

Saul : I saw you at the paddock... before the second race, outside the men's room when I placed my bet. I saw you before you even got up this morning.

Shane West : Hit me.
Rusty : It's not blackjack.

Rusty : How you been, Saul?
Saul : Never better.
Rusty : What's with the orange?
Saul : My doctor says I need vitamins.
Rusty : So why don't you take vitamins?
Saul : You come here to give me a physical?

Danny : Does he make you laugh?
Tess : He doesn't make me cry.

Rusty : Amazing. You okay? You want something to read, a magazine or something?
Rusty : Okay.

Rusty : You scared?
Linus : You suicidal?
Rusty : Only in the morning.

Danny : What if I told you I could get you your money back, would you give up Tess? What would you say?
Terry : I would say yes.

First task: reconnaissance. I want to know everything that's going on in all three casinos, the rotation of the dealers, the path of every cash cart, I want to know about everything about every guard and every watcher, anyone with a security pass, I want to know where they're from, what their nicknames are, how they take their coffee, most of all, I want you guys to know these casinos, they're built to keep people in, I want you guys to know the quick routes out. Third task, surveillance: Casino security has an eye and ear on everyone, so we want an eye and ear on them.

The Nevada Gaming Commission stipulates that a casino must hold and reserve enough cash to cover every chip that's played on its floor. That means on a weekday, by law, it has to carry anywhere between sixty to seventy million dollars in cash and coin; on the weekend it has to carry anywhere between eighty and ninety million; on a fight night, like the one in two weeks from tonight, the night we're going to rob it, one hundred and fifty million. Without breaking a sweat, there's eleven of us, each with an equal share, you do the math.

Danny : Now, they tell me I paid my debt to society.
Tess : Funny, I never got a check. 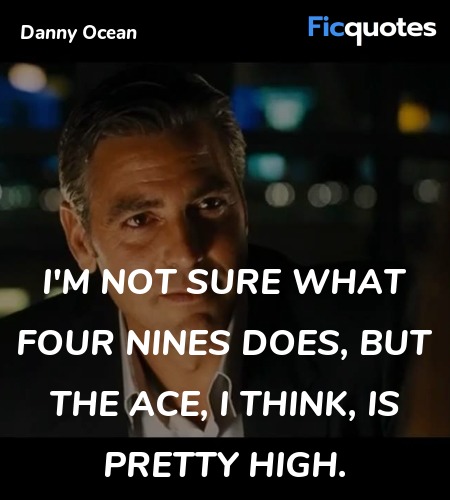 I'm not sure what four nines does, but the ace, I think, is pretty high.

Tess : You know what your problem is?
Danny : I only have one?

Danny : There's a ninety-five pound Chinese man with a hundred sixty million dollars behind this door.
Linus : Let's get him out.
Danny : Yeah.