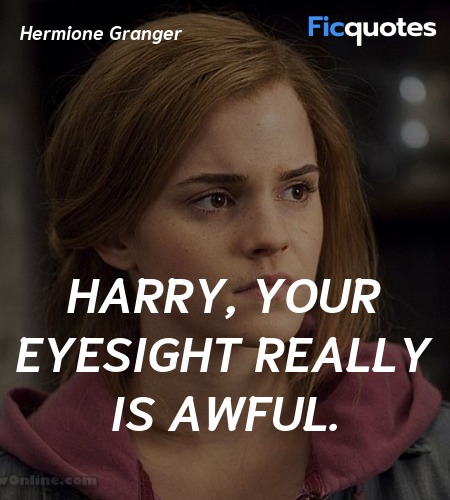 Harry, your eyesight really is awful. 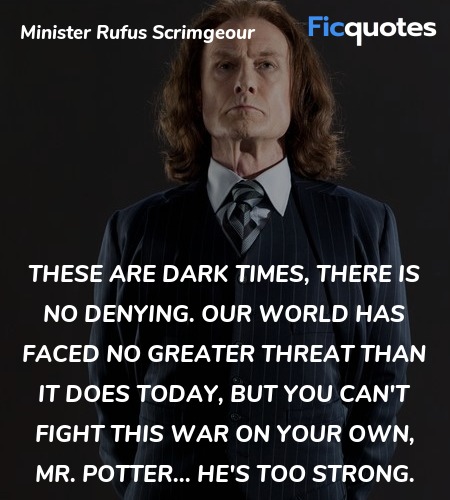 These are dark times, there is no denying. Our world has faced no greater threat than it does today, but you can't fight this war on your own, Mr. Potter... he's too strong. 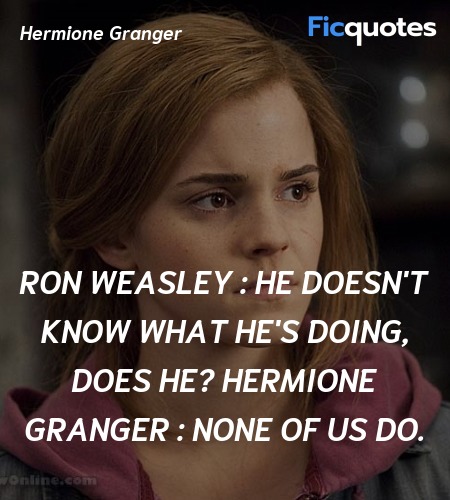 Ron Weasley : He doesn't know what he's doing, does he?
Hermione Granger : None of us do. 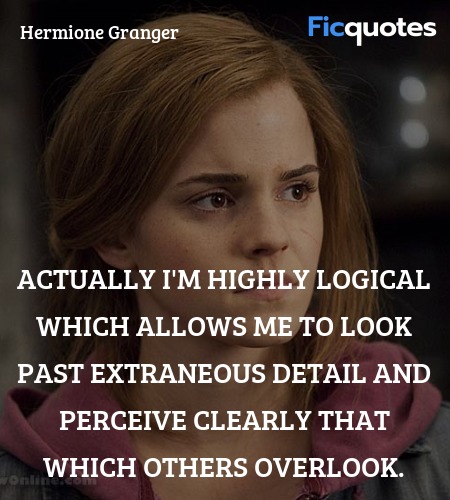 Actually I'm highly logical which allows me to look past extraneous detail and perceive clearly that which others overlook.

Hermione Granger : "There were once three brothers, who were traveling along a lonely winding road at twilight. In time, the brothers reached a river too treacherous to pass. But being learned in the magical arts, the three brothers simply waved their wands and made a bridge. Before they could cross, however, they found their path blocked by a hooded figure. It was Death, and he felt cheated, cheated because travelers would normally drown in the river. But Death was cunning. He pretended to congratulate the three brothers on their magic, and said that each had earned a prize for being clever enough to evade him. The oldest asked for a wand more powerful than any in existence, so Death fashioned one from an elder tree that stood nearby. The second brother decided he wanted to humiliate Death even further, and asked for the power to recall loved ones from the grave. So Death plucked a stone from the river and offered it to him. Finally, Death turned to the third brother. A humble man, he asked for something that would allow him to go forth from that place without being followed by Death. And so it was that Death reluctantly handed over his own cloak of invisibility. The first brother traveled to a distant village, where with the Elder Wand in hand, he killed a wizard with whom he had once quarreled. Drunk with the power that the Elder Wand had given him, he bragged of his invincibility. But that night, another wizard stole the Wand and slit the brother's throat for good measure. And so Death took the first brother for his own. The second brother journeyed to his home, where he took the Stone and turned it thrice in hand. To his delight, the girl he'd once hoped to marry before her untimely death appeared before him. Yet soon she turned sad and cold, for she did not belong in the living world. Driven mad with hopeless longing, the second brother killed himself so as to join her. And so Death took the second brother. As for the third brother, Death searched for many years, but was never able to find him. Only when he attained a great age did the youngest brother shed the Cloak of Invisibility and give it to his son. He then greeted Death as an old friend and went with him gladly, departing this life as equals."
Xenophilius Lovegood : So there you are. Those are the Deathly Hallows.

These are dark times, there is no denying. Our world has perhaps faced no greater threat than it does today. But I say this to our citizenry: We, ever your servants, will continue to defend your liberty and repel the forces that seek to take it from you! Your Ministry remains strong.

Waitress : Can I take your order?
Hermione Granger : I'll have a cappucino.
Waitress : You?
Ron Weasley : What she said.
Harry Potter : Same.

Ron Weasley : You're amazing, you are!
Hermione Granger : Always the tone of surprise.

Nymphadora Tonks : Deserves that. Brilliant, he was. Wouldn't be standing here without him.
Hermione Granger : Really?
Ron Weasley : Always the tone of surprise.

If Voldemort's really taken over the Ministry, none of the old places are safe.

Ron Weasley : Oh my God. What am I gonna do? My wife's all alone downstairs!
Harry Potter : Ron, you don't have a wife.
Ron Weasley : Right.

I want to bury him. Properly, without magic.

Ron Weasley : I've always liked these flames Hermione makes.
Ron Weasley : How long do you reckon she'll stay mad at me?
Harry Potter : Well, just keep talking about that little ball of light touching your heart, and she'll come 'round.
Ron Weasley : It was true, every word. This is gonna sound crazy, but I think that's why Dumbledore left it to me, the Deluminator. I think he knew that somehow I'd need it to find my way back, and she'd lead me.

Ginny Weasley : Seems silly, doesn't it? A wedding. Given everything that's going on.

Harry Potter : Maybe that's the best reason to have it. Because of everything that's going on.

You're lying, Dolores... and one mustn't tell lies!

Harry Potter : I don't care about a bloody wedding! No matter whose it is. I have to start searching for the Horcruxes. It's the only chance we have to beat him. And the longer we wait, the stronger he gets.
Ron Weasley : Tonight's not that night, mate. You'd only be doing him a favor.
Ron Weasley : Do you think he knows? I mean, they're bits of his soul. The Horcruxes. Bits of him. When Dumbledore destroyed the ring and you destroyed Tom Riddle's diary all those years ago... He must've felt something, right? What I'm saying is, if we do this thing right, if we find the Horcruxes and begin to destroy them one by one... Won't he know he's being hunted?