Latest Chris Chambers quotes from Stand by Me

Chris Chambers is played by River Phoenix in Stand by Me. 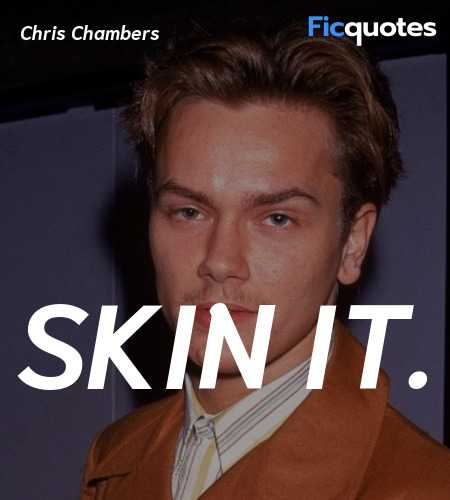 Gordie: Do you think I'm weird?
Chris: Definitely.
Gordie: No man, seriously. Am I weird?
Chris: Yeah, but so what? Everybody's weird.

Chris: I'm never gonna get out of this town am I, Gordie?
Gordie: You can do anything you want, man.
Chris: Yeah, sure. Give me some skin.
Gordie: I'll see ya.
Chris: Not if I see you first.

Suck my fat one, you cheap dime store hood.

Chris: You're gonna be a great writer someday, Gordie. You might even write about us guys if you ever get hard-up for material.
Gordie: Guess I'd have to be pretty hard-up, huh?

Gordie: But you didn't miss him. Chris Chambers never misses, does he?
Chris: Not even when the ladies leave the seat down.

Piss up a rope!

Well, all the kids, instead of calling him Davie, they call him Lardass. Lardass Hogan. Even his little brother and sister calls him Lardass. At school, they put a sticker on his back that says "Wide-Load". And they rank him out and beat him up whenever they get a chance. But one day, he gets an idea; a greatest revenge idea, a kid ever had.