Steve Rogers is a Brooklyn boy who is eager to go into army. He volunteers for an experiment of Howard Stark. That's how we get our First Avenger - Captain America.

Steve Rogers is played by Chris Evans in Captain America: The First Avenger. 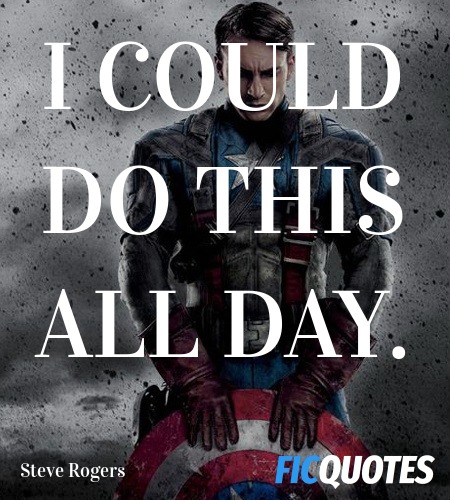 I could do this all day. 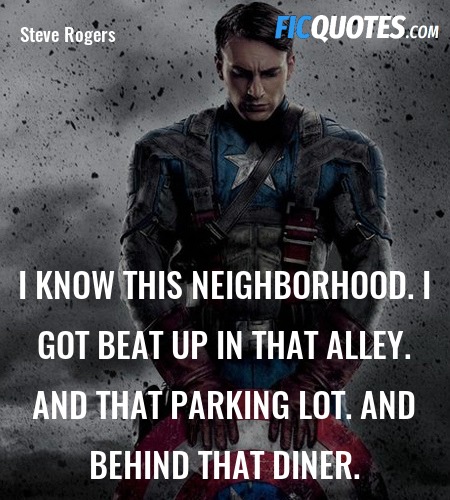 I know this neighborhood. I got beat up in that alley. And that parking lot. And behind that diner.

Even when I had nothing, I had Bucky.

Peggy Carter: You have no idea how to talk to a woman, do you?
Steve Rogers: I think this is the longest conversation I've had with one. Women aren't exactly lining up to dance with a guy they might step on.

Peggy Carter: You can't give me orders!
Steve Rogers: The hell I can't! I'm a Captain!

Sam Wilson : Hey, Cap, how do we know the good guys from the bad guys?
Steve Rogers : If they're shooting at you, they're bad. 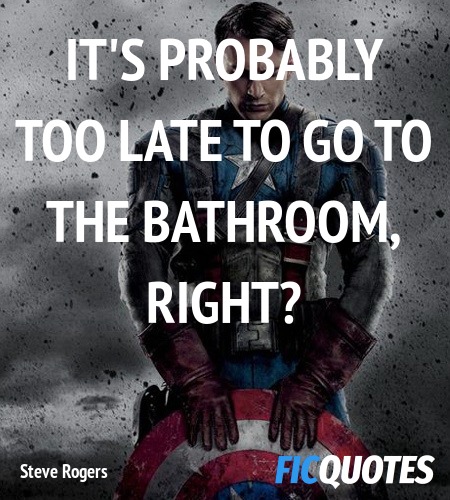 It's probably too late to go to the bathroom, right? 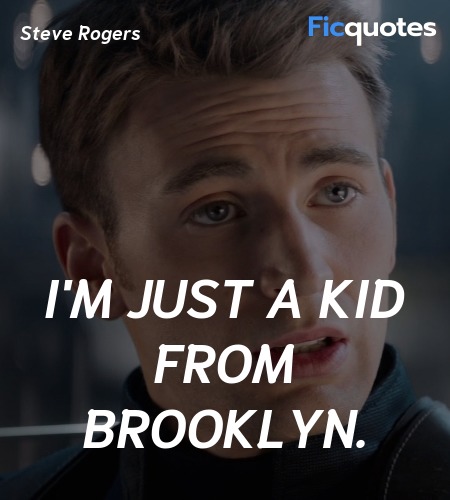 I'm just a kid from Brooklyn.

Sam Wilson : You're going after him.
Steve Rogers : You don't have to come...
Sam Wilson : I know. When do we start?

People are gonna die, Buck. I can't let that happen.

Georges Batroc : I thought you were more than a shield.
Steve Rogers : We'll see.

Steve Rogers : Bucky?
The Winter Soldier : Who the hell is Bucky?

Before we get started, does anyone want to get out?

Peggy Carter: And these are your only two options? A lab rat or a dancing monkey? You were meant for more than this, you know?
Peggy Carter: What?
Steve Rogers: You know for the longest time I dreamed about coming overseas and be on the front lines. Serving my country. I finally get everything I wanted, and I'm wearing tights.

Peggy Carter: Tell me, did you truly like your friend? Did you respect him?
Steve Rogers: Yes!
Peggy Carter: Well then, stop blaming yourself! Give your friend the respect of making his own decisions!

Steve Rogers : Attention all S.H.I.E.L.D. agents, this is Steve Rogers. You've heard a lot about me over the last few days. Some of you were even ordered to hunt me down. But I think it's time to tell the truth. S.H.I.E.L.D. is not what we thought it was. It's been taken over by HYDRA. Alexander Pierce is their leader. The S.T.R.I.K.E. and Insight crew are HYDRA as well. I don't know how many more, but I know they're in the building. They could be standing right next to you. They almost have what they want. Absolute control. They shot Nick Fury. And it won't end there. If you launch those helicarriers today, HYDRA will be able to kill anyone that stands in their way. Unless we stop them. I know I'm asking a lot. But the price of freedom is high. It always has been. And it's a price I'm willing to pay. And if I'm the only one, then so be it. But I'm willing to bet I'm not.
Sam Wilson : Did you write that down first, or was it off the top of your head?

We've only got about a 10 second window. You miss that window and we're all just bugs on a windshield
Mind the Gap!

Steve Rogers : What were you doing on the Lemurian Star?
Jasper Sitwell : Throwing up. I get seasick.

Sam Wilson : You must miss the good old days, huh?
Steve Rogers : Well, things aren't so bad. Food's a lot better; we used to boil everything. No polio is good. Internet, so helpful. I've been reading that a lot trying to catch up.

Steve Rogers : Arnim Zola was a German scientist who worked with the Red Skull. He's been dead for years.
Dr. Arnim Zola : First correction, I am Swiss. Second, look around you, I have never been more alive! In 1972, I received a terminal diagnosis. Science could not save my body. My mind, however, that was worth saving... on two hundred thousand feet of data banks! You are standing in my brain!

I think this is the longest conversation I've had with one. Women aren't exactly lining up to dance with a guy they might step on.

Steve Rogers: [showing his shield] What do you think?
[Peggy unloads her gun into the shield]
Peggy Carter: Yes. I think it works.

Peggy Carter: How do you feel?
Steve Rogers: Taller.

Steve Rogers: Dr. Erskine said that the serum wouldn't just effect my muscles, it would effect my cells. Create a protective system of regeneration and healing. Which means, um, I can't get drunk. Did you know that?
Peggy Carter: Your metabolism burns four times faster than the average person. He thought it could be one of the side effects.

Sam Wilson : You're a lot heavier than you look.
Steve Rogers : I had a big breakfast.

Steve Rogers: You know you two are going to be in a lot of trouble when you land.
Peggy Carter: And you won't?
Steve Rogers: Where I'm goin', if anybody yells at me I can just shoot them.

Peggy Carter: What do you plan to do? Walk to Austria?
Steve Rogers: If that's what it takes.