BvS is a 2016 comic book superhero movie directed by Zack Snyder. Starring Henry Cavill as Clark Kent/Superman, Ben Affleck as Batman/Bruce Wayne, Gal Gadot as Wonder Woman. The plot of movie revolves around Batman believing Superman to be a threat. Main villain of the movie is Lex Luthor played by Jesse Eisenberg. 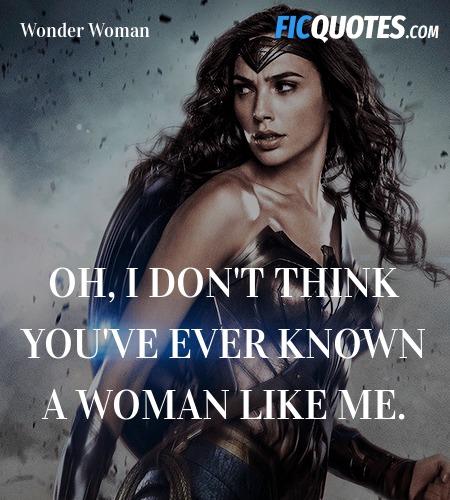 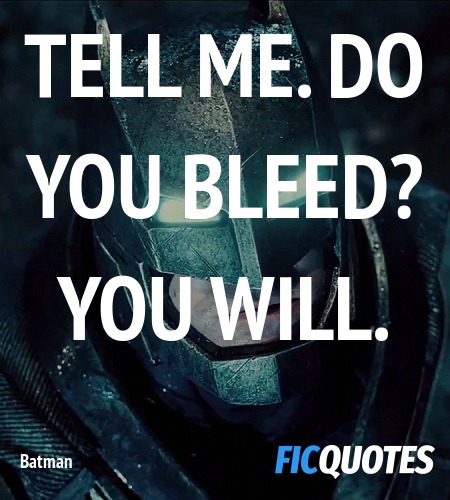 Tell me. Do you bleed? You will. 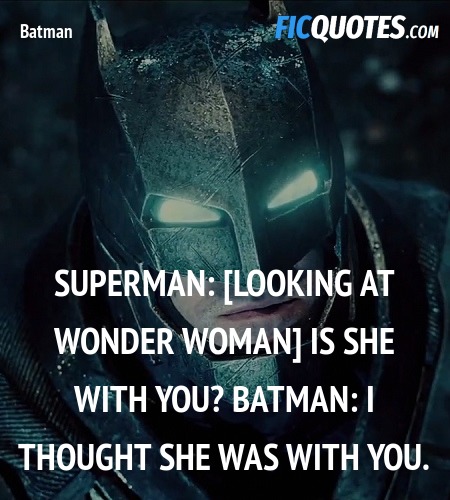 Superman: [looking at wonder woman] Is she with you?
Batman: I thought she was with you. 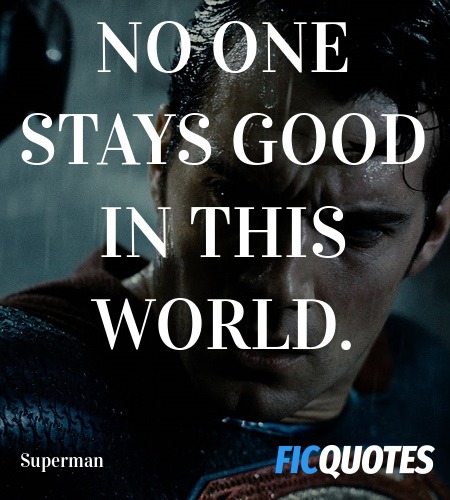 You're not brave. Men are brave.

You're not brave... men are brave. You say that you want to help people, but you can't feel their pain... their mortality... It's time you learn what it means to be a man.

[Eyes turning red] Where is she?

I bet your parents taught you that you mean something, that you're here for a reason. My parents taught me a different lesson, dying in the gutter for no reason at all... They taught me the world only makes sense if you force it to.

There was a time above... a time before... there were perfect things... diamond absolutes. But things fall... things on earth. And what falls... is fallen. In the dream, they took me to the light. A beautiful lie. [first lines of movie]

[Bruce Wayne] Maybe it's that Gotham City and me... we just have a bad history with freaks dressed like clowns.

Stay down! If I wanted it, you'd be dead already!

[Bruce Wayne] Criminals are like weeds, Alfred; pull one up, another grows in its place. This is about the future of the world. This is my legacy.

Batman: It's okay, I'm a friend of your son's.
Martha Kent: [grins] I figured. The cape.

Men are still good. We fight, we kill, we betray one another, but we can rebuild. We can do better. We will. We have to.

Superman: You don't understand, there is no time
Batman: I UNDERSTAND!

All this time I've been living my life the way my father saw it. Righting wrongs for a ghost, thinking I'm here to do good. Superman was never real. Just the dream of a farmer from Kansas.

Batman: It's time you learned what it means to be a man.
Superman: Stay down! If I wanted it, you would be dead already!

I'll take you in without breaking you, which is more than you deserve.

I don't deserve you, Alfred.

Superman: Next time they shine your light in the sky, don't go to it. The Bat is dead. Bury it. Consider this mercy.
Batman: Tell me. Do you bleed?
[Superman flies away]
Batman: You will.

It's like a one man reign of terror. This bat vigilante has been consistently targeting the port and the adjacent projects and tenements, and as far as I can tell the cops are actually helping him.

[To Lex Luthor] Whatever you do, wherever you go, I will be watching you.

[About Superman] Twenty years in Gotham. How many good guys are left? How many stayed that way? He has the power to wipe out the entire human race. I have to destroy him.

Batman: They need you at that ship. I will find her.
Superman: My mother needs me.
Batman: Wait. I make you a promise: Martha won't die tonight.

Is She With You - Zack Snyder - Ultimate Edition

Batman v Superman | No One Stays Good In This World

I bet your parents taught you that you mean something.....

Batman Vs Superman Dawn Of Justice- I've killed things from other worlds before.

If I Wanted It, You'd Be Dead Already