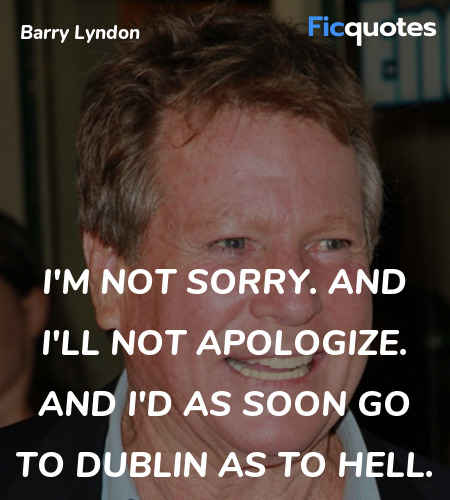 I'm not sorry. And I'll not apologize. And I'd as soon go to Dublin as to hell. 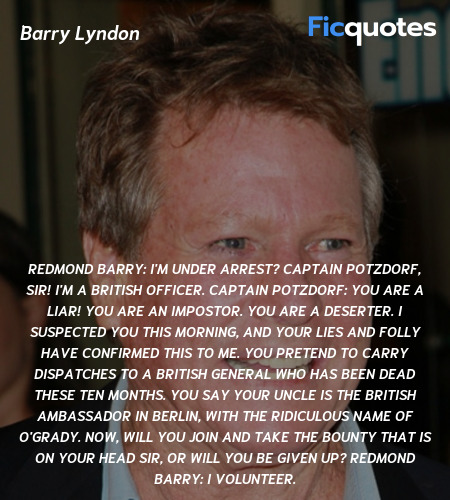 Redmond Barry: I'm under arrest? Captain Potzdorf, sir! I'm a British officer.
Captain Potzdorf: You are a liar! You are an impostor. You are a deserter. I suspected you this morning, and your lies and folly have confirmed this to me. You pretend to carry dispatches to a British general who has been dead these ten months. You say your uncle is the British Ambassador in Berlin, with the ridiculous name of O'Grady. Now, will you join and take the bounty that is on your head sir, or will you be given up?
Redmond Barry: I volunteer. 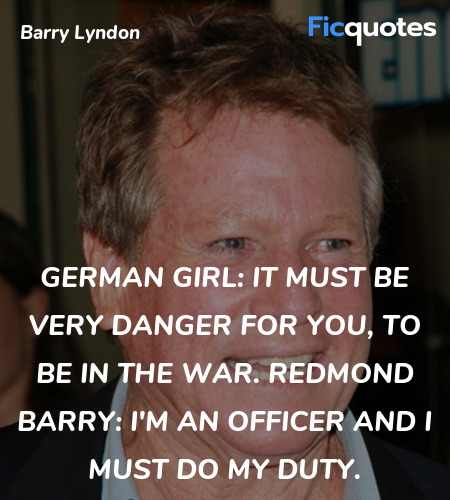 German Girl: It must be very danger for you, to be in the war.
Redmond Barry: I'm an officer and I must do my duty. 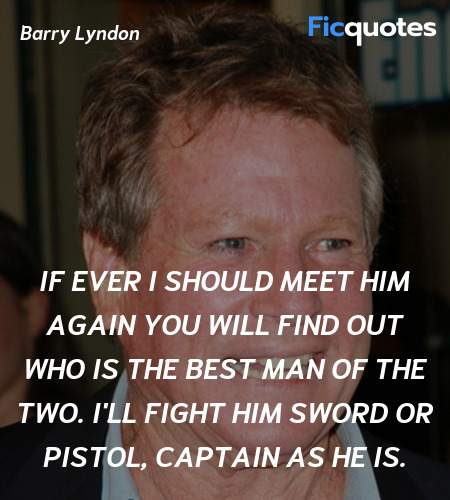 If ever I should meet him again you will find out who is the best man of the two. I'll fight him sword or pistol, captain as he is.

Lord Bullingdon, have you lost your tongue?

Redmond Barry: Sir, I... I have a confession to make to you. I'm an Irishman. And my name is Redmond Barry. I was abducted into the Prussian army two years ago, and now have been put into your service by my Captain Potzdorf, and his uncle, the Minister of Police... to serve as a watch upon your... actions... and to give information to the same quarter.
Narrator: The Chevalier was as much affected as Barry at thus finding one of his countrymen. For he too was an exile from home, and a friendly voice, a look, brought the old country back to his memory again.

Lord Bullingdon: Don't you think he fits my shoes very well Your Ladyship?
Lord Bullingdon: Dear child, what a pity it is I am not dead, for your sake. The Lyndons would then have a worthy representative and enjoy all the benefits of the illustrious blood of the Barrys of Barryville. Would they not... Mr. Redmond Barry?
Lady Lyndon: From the way I love this child, my lord, you ought to know how I would have loved his elder brother had he proved worthy of any mother's affection.
Lord Bullingdon: Madam! I have born as long as mortal could endure the ill-treatment of the insolent Irish upstart whom you've taken into your bed. It is not only the lowness of his birth and the general brutality of his manners which disgusts me, but the shameful nature of his conduct towards Your Ladyship. His brutal and ungentleman-like behavior, his open infidelity, his shameless robberies and swindling of my property, and yours. And as I cannot personally chastise this lowbred ruffian, and as I cannot bear to witness any more his treatment of you and loathe his horrible society as if it were the plague! I have decided to leave my home and never return, at least during his detested life or during my own.