After the events of Infinity War thor is pissed off. He takes all of the blame on himself because he didn't went for the head of Thanos and Thanos snapped his fingers and wiped out half the universe,

Thor is played by Chris Hemsworth in Avengers: Endgame. 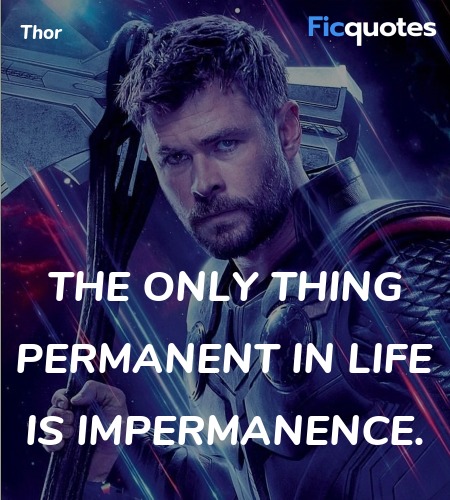 The only thing permanent in life is impermanence.

Thor: You know it's a trap, right?
Tony Stark: Yeah... but I don't much care.
Thor: Good. Just as long as we're all in agreement.
Thor: Let's kill him properly this time.

Thor: No, give me that.
Thor: You have the little one.

Frigga: The future hasn't been kind to you, has it?
Thor: I didn't say I was from the future.
Frigga: I was raised by witches, boy. I see with more than eyes and you know that.
Thor: [Crying] I'm totally from the future. 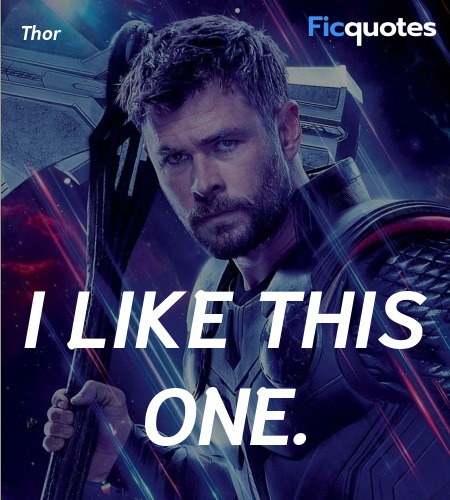 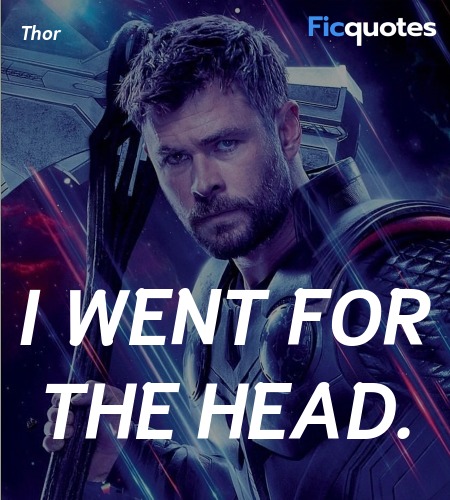 I went for the head.

Thor: [arguing over which Avenger is strong enough to wield the Infinity Gauntle] Do you know what is coursing through my veins right now?
James Rhodes: Mmm Cheez Whiz?

Korg: [playing Fortnite] Thor, he's back. That kid on the TV just called me a dickhead again.

Natasha Romanoff: Where are the Stones?
Thanos: Gone. Reduced to atoms.
Bruce Banner: You used them two days ago!
Thanos: I used the Stones to destroy the Stones. It nearly killed me, but the work is done. It always will be. I am... inevitable.
James Rhodes: We have to tear this place apart. He has to be lying.
Nebula: My father is many things. A liar is not one of them.
Thanos: Ah. Thank you, daughter. Perhaps I treated you too harshly...
Rocket: What did you do?
Thor: I went for the head.

Well, the Asgardians of the Galaxy back together again.
Frigga: You're not the Thor I know at all, are you?

Thor: Noobmaster.
Korg: Yeah, Noobmaster69.
Thor: [on the headset] Noobmaster, hey, it is Thor again. You know, the God of Thunder? Listen, buddy, if you don't log off this game immediately, I am gonna fly over to your house, come down to that basement you're hiding in, rip off your arms and shove them up your butt! Oh, that's right, yes, go cry to your father, you little weasel!
Korg: Thank you, Thor.
Thor: Let me know if he bothers you again, okay?
Korg: Thank you very much, I will.

Rocket: [To crying thor] Come here.
Thor: I think I'm having a panic attack.
Rocket: Come here.
[slaps him]
Rocket: You think you're the only one that lost people? What do you think we're doing here? I lost the only family I ever had. Quill, Groot, Drax, the chick with the antenna - all gone! I get that you miss your mom. But she's gone - REALLY gone. And there are plenty of people who are only KIND OF gone. And you can help them.

Steve Rogers: So, let's start with the Aether. Thor, what do you know?
Natasha Romanoff: Is he asleep?
James Rhodes: No. I'm pretty sure he's dead.
Thor: Ah, where to start? Um, the Aether. Firstly, not a stone. Someone called it a stone before. It's more of an angry sludge sort of thing so, someone's gonna need to amend that and stop saying that.
Thor: Here's an interesting story though about the Aether - My grandfather, many years ago, had to hide the stone from the Dark Elves. Scary beings. So Jane, actually, actually, actually Jane is a, is a old flame of mine. Uh, you know she, she stuck her hand inside a rock this one time and, and then the Aether stuck itself inside her and she became very, very sick and so I had to take her to Asgard which is where I am from, and we had to try and fix her. We were dating at the time. See I got to, I got to introduce her to my mother who's dead. And um, oh you know and Jane and I aren't even dating anymore so these things happen though you know. Nothing lasts forever. The only thing that...
Tony Stark: Why don't you come and sit down?
Thor: I am not done. The only thing that is permanent in life is impermanence.
Tony Stark: Eggs? Breakfast?
Thor: No. I'd like a Bloody Mary.

Tony Stark: Do we know if she had family.
Steve Rogers: Yeah, us.
Thor: What?
Tony Stark: Huh?
Thor: What are you do, what are you do - ?
Tony Stark: Just asking a question.
Thor: Yeah. No, you're acting like she's dead. Why are we acting like she dead? We have the stones, right? As long as we have the stones Cap, we can bring her back. Isn't that right? So stop this sh*t, we're the Avengers. Get it together.
Clint Barton: Can't get her back.
Thor: What's, what's your-What?
Clint Barton: It can't be undone. Can't.
Thor: I am sorry, no offence but you're a very Earthy being. We're talking about space magic and can't seems very different, don't you think.
Clint Barton: Yeah look, I know that I'm way outside my-my pay grade here. But she still isn't here, isn't she
Thor: No, that's my point.
Clint Barton: It can't be undone. Or that's at least what the red floating guy had to say. Maybe you wanna go talk to him, OK? Go grab your hammer, and you go fly and you talk to him! It is supposed to be me. She sacrificed her life for that damn stone. She bet her life on it.
Bruce Banner: She's not coming back. We have to make it worth it. We have to.
Steve Rogers: We will.