Snow White and the Huntsman (2012) Quotes

Snow White and the Huntsman (2012) Quotes 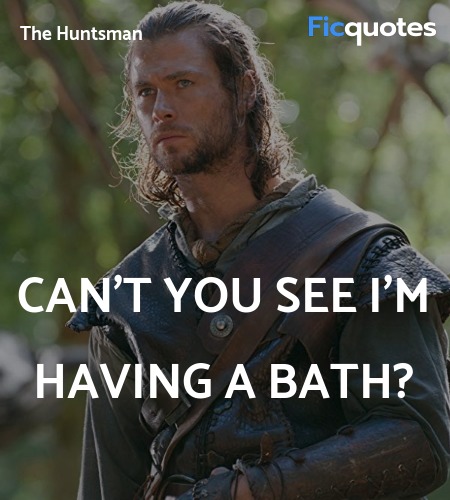 Can't you see I'm having a bath? 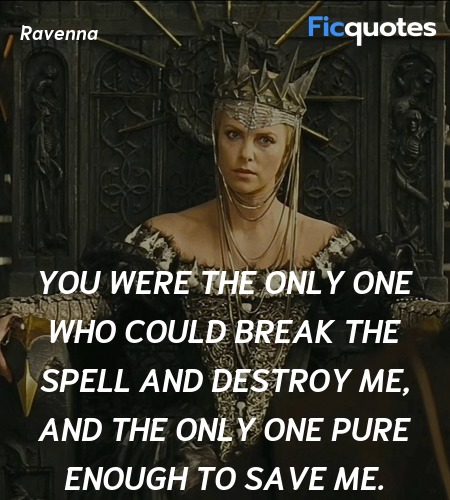 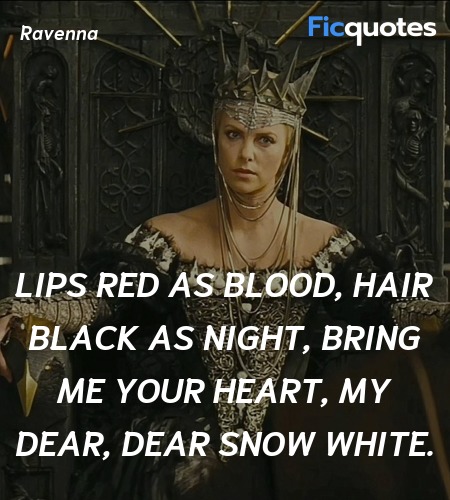 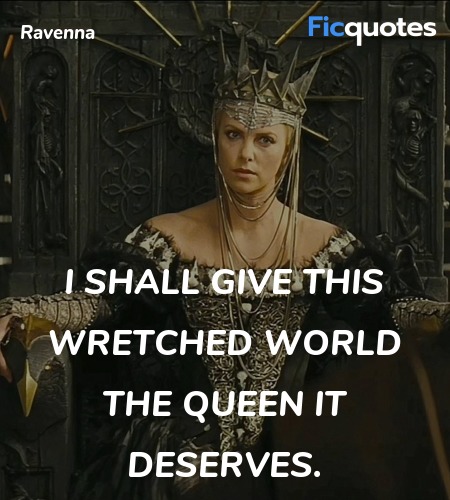 I shall give this wretched world the queen it deserves.

The forest gains its strength from your weakness.

You look very fetching in mail.

Snow White : Where are we?
Gus : They call it sanctuary, my lady. It's the home of the fairies.

I would rather die than live another day in this death!

Mirror, mirror on the wall. Who is fairest of them all?

I feel that you and I are bound.

Then let them come. Let them break their skulls on these stone walls and bring me my prize.

Finn! Lock her up. One never knows when royal blood may be of value.

You don't even realize how lucky you are never to know what it is to grow old!

And the expense grows.

She's no good to me in the Dark Forest, lost! I need her heart!

I was ruined by a king like you once. I replaced his queen. An old woman. And in time I too would have been replaced. Men use women. They ruin us and when they are finished with us they toss us to the dogs like scraps.

Snow White : Death favors no man. We must ride like thundering waves under the tattered battle flag of my father.
Duke Hammond : You must rest.
Snow White : We have rested long enough. Frost to fire and fire to frost. Iron will melt. But it will writhe inside of itself! All these years, all I've known is darkness. But I have never seen a brighter light than when my eyes just opened. And I know that light burns in all of you! Those embers must turn to flame. Iron into sword. I will become your weapon! Forged by the fierce fire that I know is in your hearts! For I have seen what she sees. I know what she knows. I can kill her. And I'd rather die today than live another day of this death! Who will ride with me? Who will be my brother?

Do you hear that? It's the sound of battles fought and lives lost. It once pained me to know that I am the cause of such despair, but now their cries give me strength. Beauty is my power.

You see, child, love always betrays us. By fairest blood it was done and only by fairest blood can it be undone. You were the only one who could break the spell and destroy me. And the only one pure enough to save me. You don't even realize how lucky you are never to know what it is to grow old!

How is it that an innocent, young girl makes a fool of my brother? Armed only with a nail. If she'd had a sword she would have taken my kingdom. Bring me the King's daughter and you let her slip right through your tiny little fingers. How? You swore that you would protect me! You swore! Now there's no one I can trust. No one! There's no loyalty, no loyalty. None! Not even from you!

So poisonous was the reign of Ravenna that nature turned on itself and people turned on each other. The land died and with it, hope. And all that time she kept Snow White imprisoned high up in the north tower.

You deserved better. I once had a wife, Princess. Sara was her name. When I came back from the wars I carried with me the stench of death and the anger of the lost. I wasn't worth saving, that's for sure. She did so anyway. And I loved her so much. I loved her more than anyone or anything. Then I let her out of my sight and she was gone. And I became myself again. A self I never cared for. Until you. See, you remind me of her. Her heart, her spirit. But now you, too, have gone. You both deserved better and I'm so sorry I failed you. I'm so sorry. But you'll be a queen in Heaven now and sit among the angels.

Once upon a time, in deep winter, a queen was admiring the falling snow, when she saw a rose blooming in defiance of the cold. Reaching for it she pricked her finger and three drops of blood fell. And because the red seemed so alive against the white she thought, "If only I had a child as white as snow, lips as red as blood, hair as black as a raven's wings, and all with the strength of that rose." Soon after a daughter was born to the queen and was named Snow White.

I've seen what she sees. I can kill her.

You can't have my heart.

Finn : Are you always awake when I watch you?
Snow White : You've never come in before.
Finn : My sister won't allow it. She wants you all to herself.
Snow White : I'm afraid of her.
Finn : And not of me?
Snow White : No.
Finn : Fear not, Princess. You will never again be locked in this cell.
Snow White : What does she want from me?
Finn : Your beating heart.