O Brother, Where Art Thou? Quotes

O Brother, Where Art Thou?

O Brother, Where Art Thou? Quotes 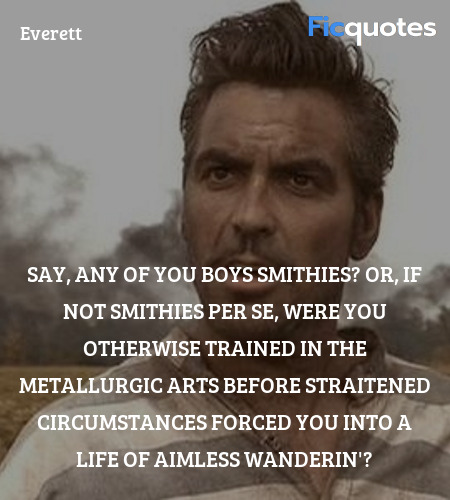 Say, any of you boys smithies? Or, if not smithies per se, were you otherwise trained in the metallurgic arts before straitened circumstances forced you into a life of aimless wanderin'? 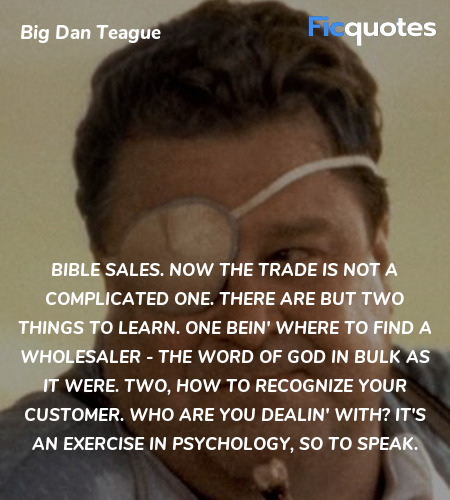 Bible sales. Now the trade is not a complicated one. There are but two things to learn. One bein' where to find a wholesaler - the Word of God in bulk as it were. Two, how to recognize your customer. Who are you dealin' with? It's an exercise in psychology, so to speak. 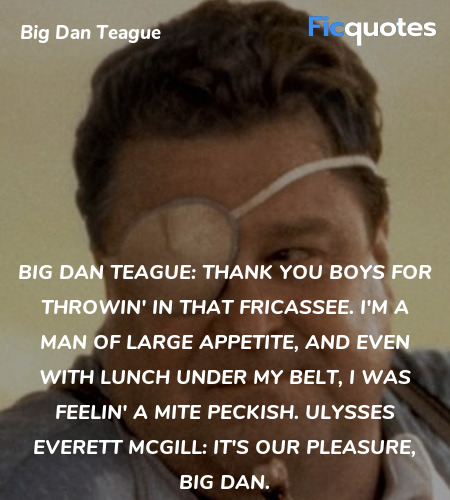 Big Dan Teague: Thank you boys for throwin' in that fricassee. I'm a man of large appetite, and even with lunch under my belt, I was feelin' a mite peckish.
Ulysses Everett McGill: It's our pleasure, Big Dan. 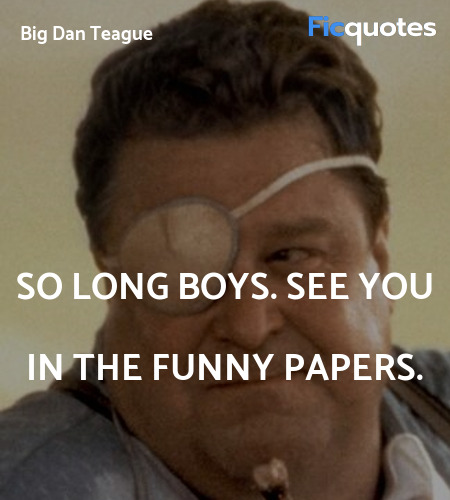 So long boys. See you in the funny papers.

Delmar O'Donnell: Everett, I never figured you for a paterfamilias.
Ulysses Everett McGill: Oh-ho, yes, I have spread my seed.

Jacking up banks. I can see how a fella'd derive a whole lot of pleasure and satisfaction out of it.

Ulysses Everett McGill: I'm not sure that's Pete.
Delmar O'Donnell: Of course it's Pete! Look at him!... We gotta find some kind of wizard to change him back.

Since we been followin' your lead, we ain't got nothing but trouble.

I'm gonna visit those foreclosing son-of-a-guns at the Indianola Savings & Loan, slap that money on the barrelhead and buy back the family farm. You ain't no kind of man if you ain't got land.

You don't say much my friend, but when you do it's to the point, and I salute you for it.

I like the smell of my hair treatment; the pleasing odor is half the point.

I'm gonna propose you a proposition!

Damn! We're in a tight spot!

Yessir, the South is gonna change. Everything's gonna be put on electricity and run on a paying basis. Out with old spiritual mumbo-jumbo, the superstition and the backward ways. We're gonna see a brave new world where they run everyone a wire and hook us all up to the grid. Yessir, a veritable age of reason - like they had in France. And not a moment too soon...

I was not hit by a train. Damnit, I am the paterfamilias!

Pete: Wait a minute. Who elected you leader of this outfit?

Ulysses Everett McGill: Well Pete, I figured it should be the one with the capacity for abstract thought. But if that ain't the consensus view, then hell, let's put it to a vote.

Pete: Well I'll be a sonofabitch. Delmar's been saved.
Delmar O'Donnell: Well that's it, boys. I've been redeemed. The preacher's done warshed away all my sins and transgressions. It's the straight and narrow from here on out, and heaven everlasting's my reward.
Ulysses Everett McGill: Delmar, what are you talking about? We've got bigger fish to fry.
Delmar O'Donnell: The preacher says all my sins is warshed away, including that Piggly Wiggly I knocked over in Yazoo.
Ulysses Everett McGill: I thought you said you was innocent of those charges?
Delmar O'Donnell: Well I was lyin'. And the preacher says that that sin's been warshed away too. Neither God nor man's got nothin' on me now. C'mon in boys, the water is fine.

Pete: I've always wondered, what's the devil look like?
Ulysses Everett McGill: Well, there are all manner of lesser imps and demons, Pete, but the great Satan hisself is red and scaly with a bifurcated tail, and he carries a hay fork.
Tommy Johnson: Oh, no. No, sir. He's white, as white as you folks, with empty eyes and a big hollow voice. He likes to travel around with a mean old hound. That's right.

Ulysses Everett McGill: The treasure is still there boys, believe me.
Delmar O'Donnell: But how'd he know about the treasure?
Ulysses Everett McGill: I don't know Delmar. The blind are reputed to possess sensitivities compensating for their lack of sight, even to the point of developing paranormal psychic powers. Now, clearly seeing into the future would fall into neatly into that category; its not so surprising then that an organism deprived of its earthly vision...
Pete: He said we wouldn't get get it. He said we wouldn't get the treasure we seek on account of our ob-stac-les.
Ulysses Everett McGill: Well what the hell does he know, he's just an ignorant old man?

Ulysses Everett McGill: I am a man of constant sorrow, I've seen trouble all my days. I bid farewell to old Kentucky, the place where I was born and raised.
Delmar O'Donnell , Pete: The place where he was born and raised.
Ulysses Everett McGill: For six long years I've been in trouble, no pleasure here on Earth I've found. For in this world I'm bound to ramble, I have no friends to help me out.
Delmar O'Donnell , Pete: He has no friends to help him out.
Ulysses Everett McGill: Maybe your friends think I'm just a stranger, my face you never will see no more. But there is one promise that is given, I'll meet you on God's golden shore.
Delmar O'Donnell , Pete: He'll meet you on God's golden shore.

Pete: Well hell, it ain't square one! Ain't nobody gonna pick up three filthy, unshaved hitch-hikers, and one of them a know-it-all that can't keep his trap shut.
Ulysses Everett McGill: Pete, the personal rancor reflected in that remark I don't intend to dignify with comment. But I would like to address your general attitude of hopeless negativism. Consider the lilies of the goddamn field or... hell! Take at look at Delmar here as your paradigm of hope.
Delmar O'Donnell: Yeah, look at me.

Ulysses Everett McGill: Pete's cousin turned us in for the bounty.
Pete: The hell you say! Wash is kin!
Washington Hogwallop: Sorry, Pete, I know we're kin, but they got this depression on. I got to do for me and mine.
Pete: I'm gonna kill you, Judas Iscariot Hogwallop!

Do not seek the treasure!
Ulysses Everett McGill: Well, I guess hard times flush the chump. Everybody's lookin' for answers... Where the hell's he goin'?
Pete: Well, I'll be a son of a bitch. Delmar's been saved!

Pete: You ruined my life!
Ulysses Everett McGill: I do apologize about that Pete.