Sports agent Jerry Maguire gets fired from his job for exposing the illegal practices in his profession through his book. Jerry starts his own company with his one and only employee young Dorothy Boyd. He however only manages to get one client, Rod Tidwell. How he manages his company and his romance with Dorothy makes the rest of the movie.

Jerry Maguire is a beautiful mix of romance, comedy and sports. The film features some of the iconic quotes like "Show me the money." and "You had me at hello.". Enjoy the rest of the wonderful lines and quotes from this Tom Cruise starrer. Don't forget to sprinkle some love to your friends by sharing the Jerry Maguire quotes over to your social media. 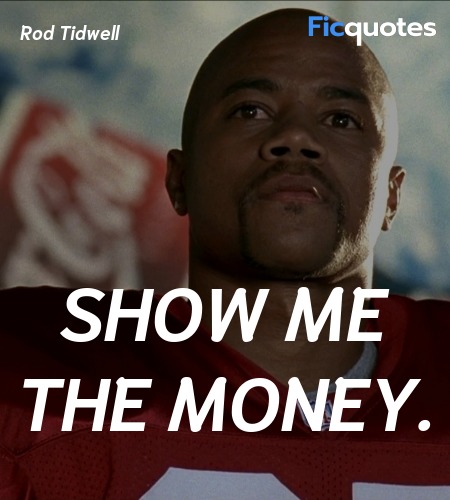 Show me the money. 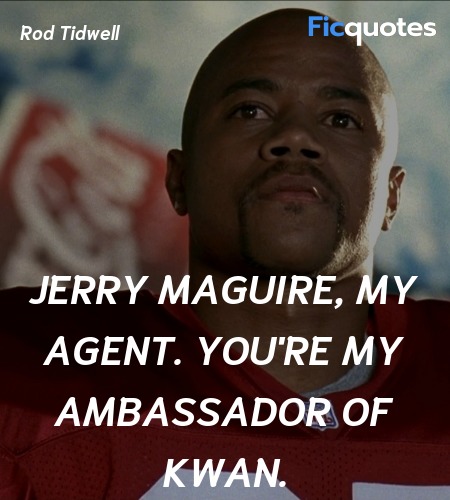 Jerry Maguire, my agent. You're my ambassador of Kwan. 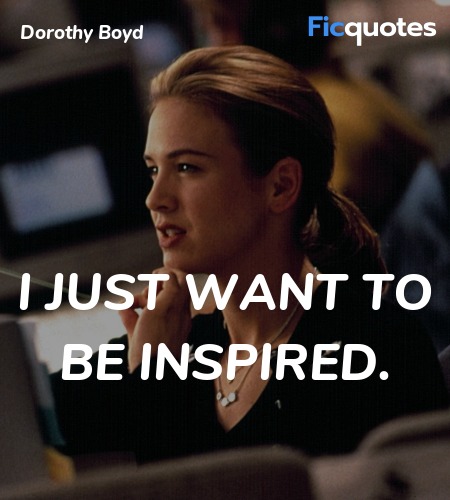 I just want to be inspired. 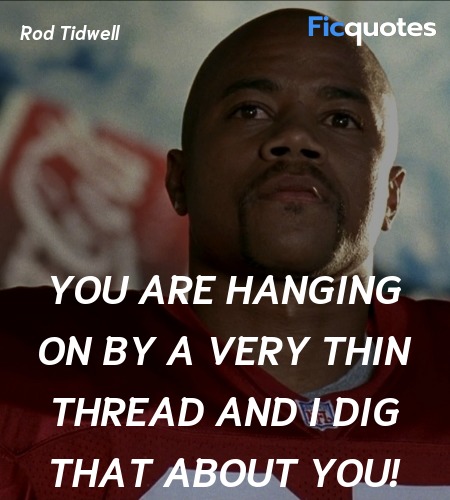 You are hanging on by a very thin thread and I dig that about you!

I won't let you get rid of me.

I got a shelf life of ten years, tops. My next contract's gotta bring me the dollars that'll last me and mine a long time. Shit, I'm out of this sport in 5 years. What's my family gonna live on? Huh?

You had me at hello

You bet on me like I bet on you.

Is it my imagination or, didn't we arrive in a limo?

I am out here for you. You don't know what it's like to be ME out here for YOU. It is an up-at-dawn, pride-swallowing siege that I will never fully tell you about, ok?

On the surface, everything seems fine. I've got this great guy. And he loves my kid. And he sure does like me a lot. And I can't live like that. It's not the way I'm built.

America still sets the tone for the world of sports, in Indiana I signed Clark Hodd, his only thirteen years old and is considered the best point guard in the country and last week he scored a hundred points: in a single game. I also signed Erica Sorgi, you'll see her in the next Olympics. In Seattle I signed Dallas Malloy, she's sixteen years old and her lawsuit helped paved the way for women boxers everywhere, whenever she fights she thinks about her ex-boyfriend. In Indio, California I signed Art Stallings he plays the sport with what pure joy. In Odessa, Texas I signed the great Frank Cushman this April twenty six teams will be falling all over themselves in order to sign him in the next NFL draft his my client, my most important client, believe me there's genius everywhere but until they turn pro it's like popcorn in the pan some pop, some don't

I have this great guy. And he loves my son. And he sure does like me a lot.

I was inspired, and I'm an accountant.

I hated myself... no, I hated my place in the world.

I'm still sort of moved by your "My word is stronger than oak" thing.

Jump in my nightmare, the water's warm!

Have you ever gotten the feeling that you aren't completely embarassed yet, but you glimpse tomorrow's embarrassment?

I've had three lovers in the past four years, and they all ran a distant second to a good book and a warm bath.

Don't worry, I'm not gonna do what you all think I'm gonna do, which is, you know, FLIP OUT!

Look at me Laurel, I'm the oldest 26 year old in the world.

I'm sure giving a ride would just make your day to drive us all the way out to Manhattan Beach making that left a little tiny wider than the street playing chicken with the oncoming traffic, your life flashing before your eyes I've obviously had too much coffee

I'm sorry to hear that. I think you're making a big mistake. I'm concerned about you, your family and your future and if you stay here, I don't know what's going to happen.

let me just say as I ease out of the office I helped build. I'm sorry but that's a fact that there's such a thing as "manners," the way of treating people: these fish have manners, in fact I'm taking them with me, call me "sentimental" but I'm taking because they have manners, we'll see you all again, sleep tight.

Right now you're paying twenty five percent to SMI. I would cut my commission by seven percent, I'm going to make this choice easy for you: what does your heart tell you?

two days later at our corporate conference in Miami a break through, a breakdown? No a breakthrough. I had so much to say and no one to listen and then it happened an unexpected thing: I began writing what they call a "mission statement" not a memo, a "mission statement", a suggestion for the future of our company a night like this doesn't come around very often. I seized it. What started out as one page slowly became twenty five, suddenly, I was my father's son again I was remembering the simple pleasures of this job: how I ended up here out of law school, the way a stadium sounds when one of my players performs well on the field the way we are meant to protect them in health and in injury with so many clients we've forgotten what's important I wrote, and wrote and wrote and I'm not even a writer I was even remembering the original words of my mentor the late great Dicky Fox, suddenly it was all clear: the answer was fewer clients and less money giving more attention to them, caring for them caring for ourselves. I'll be the first to admit it what I was writing was somewhat "touchy feely", I didn't care I had lost the ability to bullshit, it was the me I always wanted to be. I put the mission statement into a bag and took it to a copy mat in the middle of the night, printed a hundred and ten copies even the cover looked like The Catcher in the Rye. I entitled it:The things we think and do not say, The Future of our Business.

I'm the guy you don't usually see. I'm the one behind the scenes. I'm the sports agent, you those photos where the new player holds the team jersey and poses with the owner? Inside that building, that's where I work: S.M.I.,Sports Management International, thirty three out of shape agents, guiding the careers of one thousand five hundred eighty five of the most finely tuned athletes alive. I handle the lives and dreams of seventy two clients and I get an average of two hundred sixty four phone calls a day, that's what I do, this is what I do best, but I'll be honest with you. I started noticing a few years ago and I didn't say a word but the quest for the big dollars and a lot of the little things were going wrong, but lately, it's gotten worse who did I become? Just another shark in a suit?

That's more than a dress. That's an Audrey Hepburn movie.

So this is the world, and there are almost six billion people on it. When I was a kid, there were three. It's hard to keep up.

I will not rest until I have you holding a Coke, wearing your own shoe, playing a Sega game featuring you, while singing your own song in a new commercial, starring you, broadcast during the Superbowl, in a game that you are winning, and I will not sleep until that happens. I'll give you fifteen minutes to call me back.

But if anybody else wants to come with me, this moment will be the ground floor of something real and fun and inspiring and true in this godforsaken business and we will do it together! Who's coming with me besides... "Flipper" here?