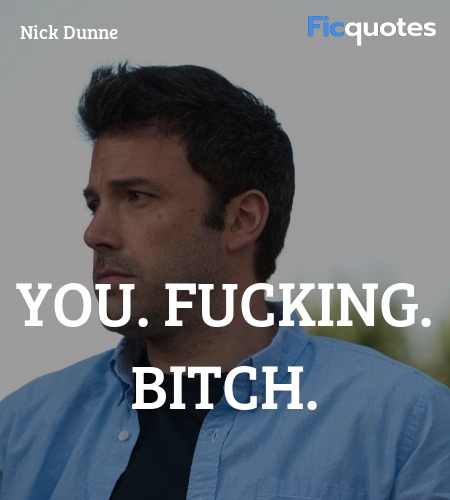 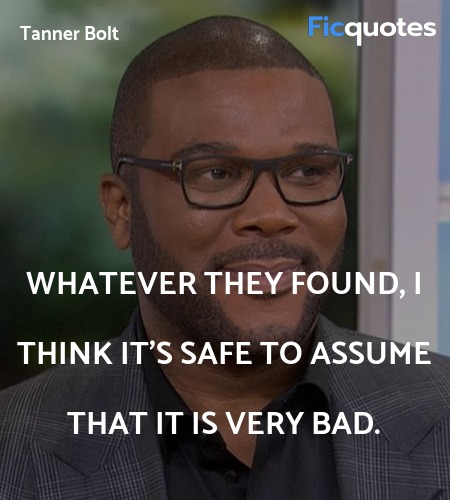 Whatever they found, I think it's safe to assume that it is very bad. 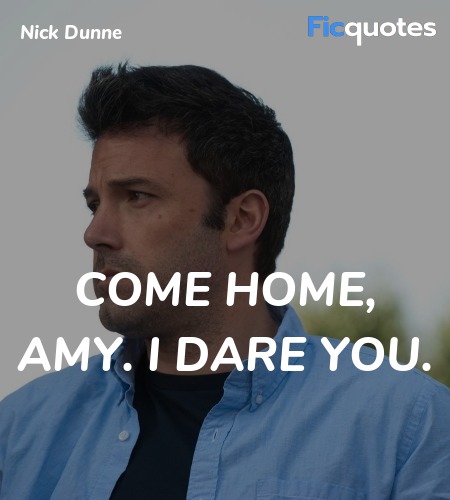 Come home, Amy. I dare you. 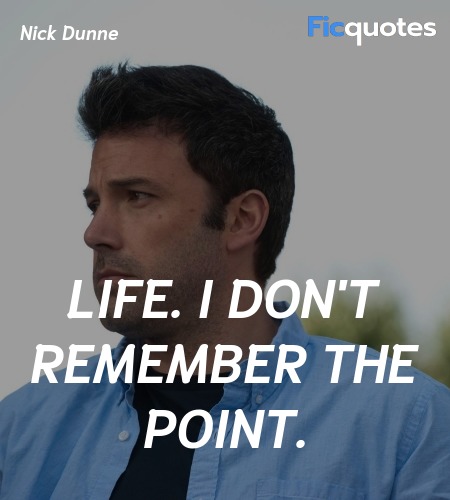 Life. I don't remember the point.

Do you really want to be the couple that has a baby to save their marriage?

All I'm trying to do is being nice to the people who are volunteering to help find Amy.

I'm so much happier now that I'm dead.

I've killed for you. Who else can say that?

When two people love each other and they can't make that work, that's the real tragedy.

You think you'd be happy with a nice Midwestern girl? No way, baby! I'm it.

I will practice believing my husband loves me, and will love this baby. That this child might really save our marriage. But I could be wrong. Because sometimes, the way he looks at me, I think, man of my dreams, father of my child, this man of mine may kill me. He may truly kill me.

For Valentine's Day, I thought I'd buy a gun.

I swear, you two are the most fucked up people I've ever known and I specialize in fucked up.

Tanner Bolt : I will drill you as if you were doing a deposition. What to say, what not to say.
Margo Dunne : A trained monkey?
Tanner Bolt : A monkey who doesn't get the lethal injection.

The girl with the giant cum-on-me tits.

I will practice believing my husband loves me but I could be wrong.

Nick dunne took my pride and my dignity and my hope and my money. He took and took from me until I no longer existed. That's murder.

What are you thinking? How are you feeling? What have we done to each other? What will we do?

We're so cute. I wanna punch us in the face.

I'm so much happier now that I'm dead. Technically missing. Soon to be presumed dead. Gone. And my lazy lying shitting oblivious husband will go to prison for my murder. Nick Dunne took my pride and my dignity and my hope and my money. He took and took from me until I no longer existed. That's murder. Let the punishment fit the crime. To fake a convincing murder you have to have discipline. You befriend a local idiot. Harvest the details of her hundrum life and cram her with stories about your husband's violent temper. Secretly create some money troubles: credit cards, perhaps online gambling. With the help of the unwitting, bump up your life insurance. Purchase getaway car. Craigslist. Generic. Cheap. Pay cash. You need to package yourself so that people will truly mourn your loss. And America loves pregnant women. As if it's so hard to spread your legs. You know what's hard? Faking a pregnancy. First, drain your toilet. Invite pregnant idiot into your home and ply her with lemonade. Steal pregnant idiot's urine. Voilà! A pregnany is now part of your legal medical record. Happy Aniversary. Wait for your clueless husband to start his day. Off he goes... and the clock is ticking. Meticulously stage your crime scene with just enough mistakes to raise the specter of doubt. You need to bleed. A lot. A lot, a lot. The head wound kind of bleed. A crime scene kind of bleed. You need to clean; poorly, like he would. Clean and bleed, bleed and clean. And leave a Little something behind: a fire in July? And because you're you, you don't stop there. You need a diary. Mínimum three hundred entries on the Nick and Amy story. Start with the fairy-tale early days: those are true, and they're crucial. You want Nick and Amy to be likable. After that, you invent. The spending, the abuse, the fear, the threat of violence. And Nick thought he was the writer... burn it, just the right amount. Make sure the cops will find it. Finally, honor tradition with a very special treasure hunt. And if I get everything right, the world will hate Nick for killing his beautiful, pregnant wife. And after all the outrage, when I'm ready, I'll go out on the water with a handful of pills and a pocket full of stones. And when they find my body, they'll know: Nick Dunne dumped his beloved like garbage, and she floated past all the other abused, unwanted, inconvenient women. Then Nick will die too. Nick and Amy will be gone, but then we never really existed. Nick loved a girl I was pretending to be. "Cool girl". Men always use that, don't they? As their defining compliment: "She's a cool girl". Cool girl is hot. Cool girl is game. Cool girl is fun. Cool girl never gets angry at her man. She only smiles in a chagrined, loving manner. And then presents her mouth for fucking. She likes what he likes, so evidently he's a vinyl hipster who loves fetish Manga. If he likes girls gone wild, she's a mall babe who talks for football and endures buffalo wings at Hooters. When I met Nick Dunne I knew he wanted "Cool girl". And for him, I'll admit: I was willing to try. I wax-strippe my pussy raw. I drank canned beer watching Adam Sandler movies. I ate cold pizza and remained a size two. I blew him, semi-regularly. I lived in the moment. I was fucking game. I can't say I didn't enjoy some of it. Nick teased out in me things I didn't know existed. A lightness, a humor, an ease. But I made him smarter. Sharper. I inspired him to rise to my level. I forged the man of my dreams. We were happy pretending to be other people. We were the happiest couple we knew. And what's the point of being together if you're not the happiest? But Nick got lazy. He became someone I did not agree to marry. He actually expected me to love him unconditionally. Then he dragged me, penniless, to the navel of this great country and found himself a newer, younger, bouncier cool girl. You think I'd let him destroy me and end up happier than ever? No fucking way. He doesn't get to win. My cute, charming, salt-of-the-earth Missouri guy. He needed to learn. Grown-ups work for things. Grown-ups pay. Grown-ups suffer consequences.

Nick Dunne : You know, we have a pretty serious homeless problem in our neighborhood. You maybe could should check that out.
Officer Jim Gilpin : We'll look into that.

When I think of my wife, I always think of her head. The shape of it, to begin with.

Nick Dunne : Go, you're my voice of reason. I need you with me on this.
Margo Dunne : Of course I'm with you. I was with you before we were even born.

When I think of my wife, I always think of the back of her head. I picture cracking her lovely skull, unspooling her brain, trying to get answers. The primal questions of a marriage: What are you thinking? How are you feeling? What have we done to each other? What will we do?

We hope you enjoyed reading Gone Girl quotes. Browse other movie quotes on Ficquotes also. If you think we missed any quote from Gone Girl, please send it to us so we can expand our collection of the best Gone Girl quotes.