Deadpool : I know right? You're probably thinking, "Whose balls did I have to fondle to get my very own movie"? I can't tell you his name, but it rhymes with "Polverine."
Deadpool : And let me tell you, he's got a nice pair of smooth criminals down under.

All dinosaurs feared the T-Rex!

Blind Al : I get why you're so pissy, but your mood's never gonna brighten 'till you find this woman and tell her how you feel.
Deadpool : What do I keep telling you, Mrs. Magoo? She wouldn't have me. If you could see me, you'd understand.
Blind Al : Looks aren't everything.
Deadpool : Looks ARE everything! Ever heard Dave Beckham speak? It's like he mouth-sexed a can of helium. You think Ryan Reynolds got this far on a superior acting method?
Blind Al : Love is blind, Wade.
Deadpool : No. You're blind.
Blind Al : So you're just gonna lie there and whimper?
Deadpool : No, I'm gonna wait 'till this arm plows through puberty, and then I'll come up with a whole new Christmas day plan.

You're probably thinking, "My boyfriend said this was a superhero movie but that guy in the suit just turned that other guy into a fucking kabab!" Well, I may be super, but I'm no hero. And yeah, technically, this is a murder. But some of the best love stories start with a murder. And that's exactly what this is, a love story. And to tell it right... I gotta take you back to long before I squeezed this ass into red spandex.

Ajax : We have everything we need now.
Weasel : You sure? You don't want any clothes that are not monochromatic? Have fun at your midnight showing of Blade II. 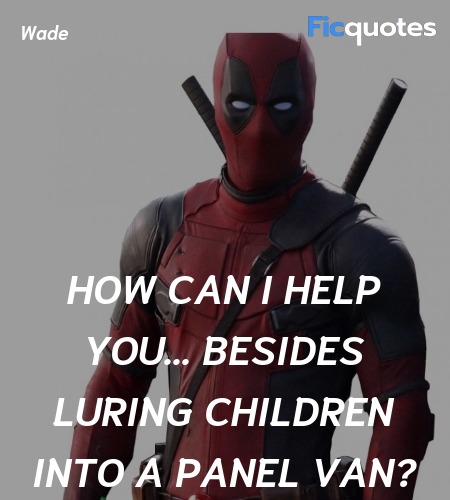 How can I help you... besides luring children into a panel van?

Not often a dude ruins your face, skull-stomps your sanity, grabs your future baby mama, and personally sees to four of your five shittiest moments. Let's just say... it's beginning to look a lot like Christmas.

Dopinder : I presume a crisp high five?
Deadpool : For you? 10.
Deadpool : Okay, guys, let's get out there and make a difference.
Deadpool : You know what do to.
Dopinder : Knock 'em dead, Pool Boy!

Fucking Wade Wilson. Suppose I'd wear a mask, too, if I had a face like that. I only wish I'd heal the same.

I was a patient here once myself, you know. The treatment affects everyone differently. It made Angel inhumanly strong. In my case, it enhanced my reflexes. Also scorched my nerve endings, so I no longer feel pain. In fact, I no longer feel anything.

Vanessa Carlysle : I've been trying to tell you assholes, you got the wrong girl! My old boyfriend, he's dead.
Ajax : See, I thought that, too. But he keeps on coming back. Like a cockroach, but uglier. Now, I may not feel, but he does. Let's see how he fights with your head on the block.

From the studio that inexplicably sewed his fucking mouth shut the first time comes five-time Academy Award viewer, Ryan Reynolds in an eHarmony date with destiny. Ladies and gentlemen, I give you... me! Deadpool.

Crime's the disease, meet the cure. Okay, not the cure, but more like a topical ointment to reduce the swelling and itch. Hi, Tom!

Deadpool :That's right! You're about to be killed by a zamboni!
Deadpool : Tell me where your fucking boss is or you're going to die! In five minutes!

Listen, the day I decide to become a crime-fighting shit swizzler, who rooms with a bunch of other little whiners at the Neverland Mansion of some creepy, old, bald, Heaven's Gate-looking motherfucker... on that day, I'll send your shiny, happy ass a friend request!

Time to make the chimi-fuckin'-changas. 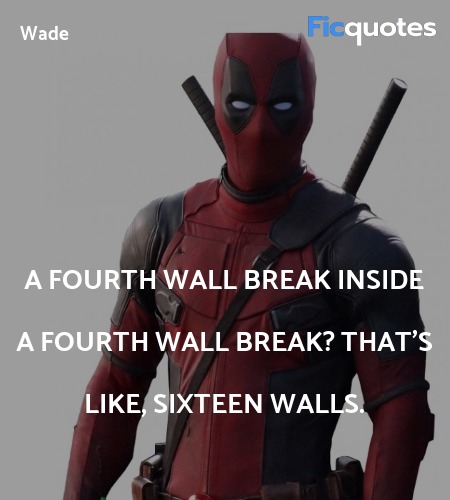 Colossus : You will come talk with Professor Xavier.
Deadpool : McAvoy or Stewart? These timelines can get so confusing.

Negasonic Teenage Warhead : You guys going for a bite? Early bird special?
Deadpool : Oh, like there's something wrong with eating before sundown or saving money. No, you know that bad guy that you let go? He's got my girl. You're gonna help me get her back.
Colossus :Wade, is that you?
Deadpool : Yeah, it's me, Deadpool, and I got an offer that you can't refuse. I'm gonna wait out here, okay? It's a big house. It's funny that I only ever see two of you. It's almost like the studio couldn't afford another X-Man.

Deadpool: You're still here? It's over. Go home! Oh, you're expecting a teaser for Deadpool 2. Well, we don't have that kind of money. What are you expecting, Sam Jackson show up with an eyepatch and a saucy little leather number? Go, go.
Credits : The making and authorized distribution of this film supported over 13,000 jobs and involved hundreds of thousands of work hours.
Deadpool : Oh, but I can tell you one thing and it's a bit of a secret. In the sequel, we're gonna have Cable. Amazing character. Bionic arm, time travel. We have no idea who we're gonna cast yet but it could be anybody. We just need a big guy with a flat top. Could be Mel Gibson, Dolph Lundgren, Keira Knightley, she's got range, who knows? Anyway, big secret, ssshhhh. Oh and don't leave your garbage all lying around. It's a total dick move. Go. Chicka-chickahhhh.

Wade Wilson : I had another Liam Neeson nightmare. I kidnapped his daughter and he just wasn't having it.
Wade Wilson : They made three of those movies. At some point you have to wonder if he's just a bad parent. 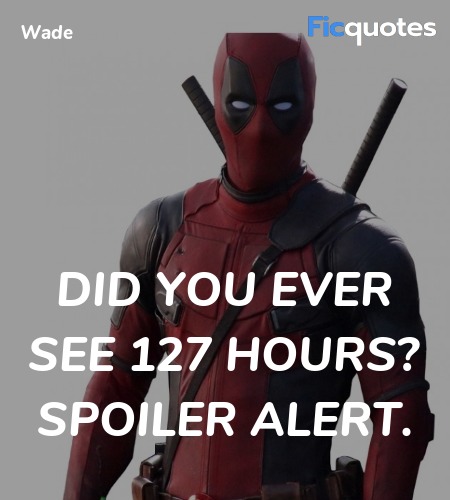 Did you ever see 127 Hours? Spoiler alert.

Deadpool cake for the release of Deadpool 2 movie!

We hope you enjoyed reading Deadpool quotes. Browse other movie quotes on Ficquotes also. If you think we missed any quote from Deadpool, please send it to us so we can expand our collection of the best Deadpool quotes.