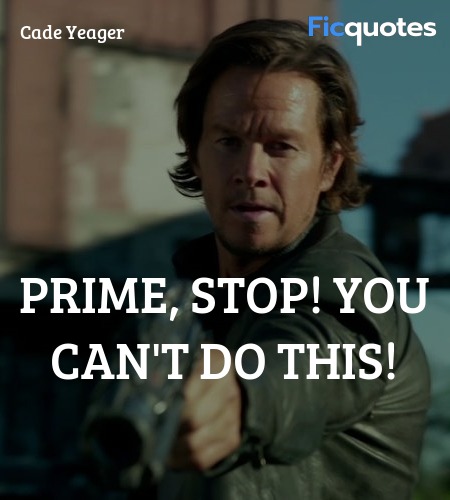 Prime, stop! You can't do this! 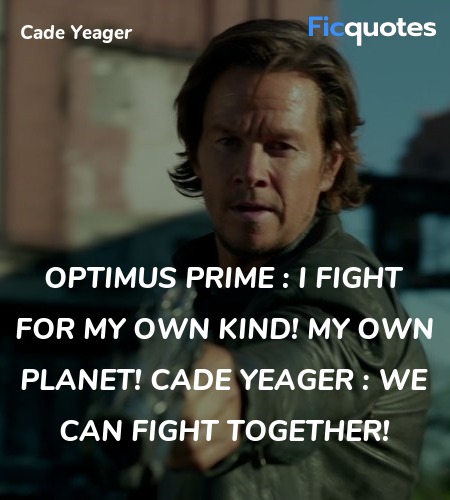 Optimus Prime : I fight for my own kind! My own planet!
Cade Yeager : We can fight together! 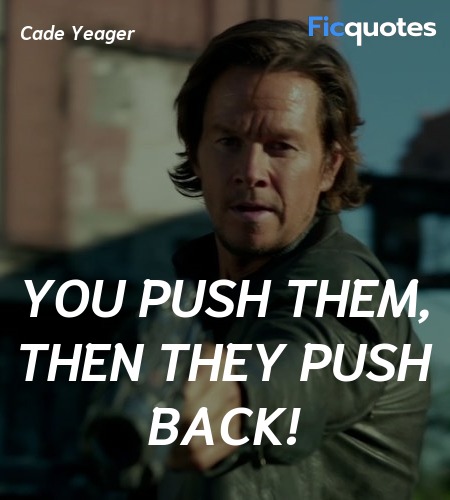 You push them, then they push back! 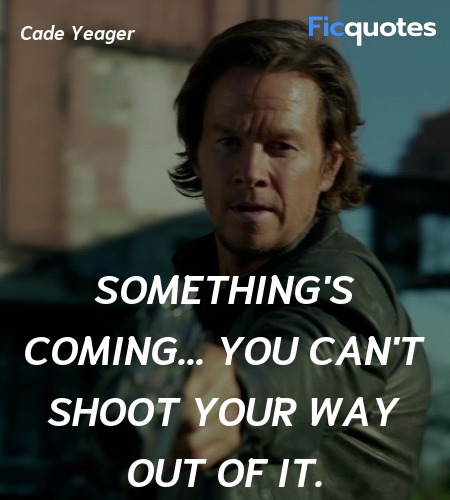 Something's coming... you can't shoot your way out of it.

Izabella : Your daughter, what would you say to her?
Cade Yeager : Brush your teeth, work hard, stay away from any boy in a band. Especially a drummer.

Only in America is having a higher education considered an insult.

Okay, you American man, shut it.

I hope I was kidnapped by one of the famous ones!

I've heard that voice in my nightmares...

You know who they always kill first? Lawyers.

When this was unleashed, everybody around it died!

And now the greatest mission of all, to turn the tide of human history...

Oh my God... Cybertron is coming.

Berserker : I'll suck your brains!
Lawyer : Absolutely not!
Colonel William Lennox : Yeah, no! Nope. No. There are limits. Pick again.

Colonel William Lennox : What are you looking for, Megatron? What do you want?
Megatron : What everyone wants: to go home!

When all seems lost, a few brave souls can save everything we've ever known.

Santos : Where are the others? Where are you hiding them?
Cade Yeager : I don't sell out friends.

Santos : What is that?
Cade Yeager : That was a mistake.

It started as a legend, one of the greatest of all... For a thousand years, weve kept it hidden, to protect Earth from what is expected to arrive...

The imminent destruction of all we know and love, begins now.

These are troubled times. Without leaders, chaos reigns.

You want to know, don't you, duuuude? Why they keep coming here?

And now two worlds colliding, only one survives.

One hundred billion trillion planets in the cosmos. You want to know, don't you, why they keep coming here?

It has been said throughout the ages, that there can be no victory, without sacrifice.

Sir Edmund Burton : Stop that!
Cogman : I was trying to make the moment more epic.

Cade Yeager : You got a family now, they're gonna take care of you.
Crosshairs : Listen up, little miss sunshine - I'm in charge now. Just don't expect any bedtime stories.

Cade Yeager : What are you doing?
Desi : Dying!
Cade Yeager : It was a bean bag!
Desi : A bean bag? I felt it go through me!