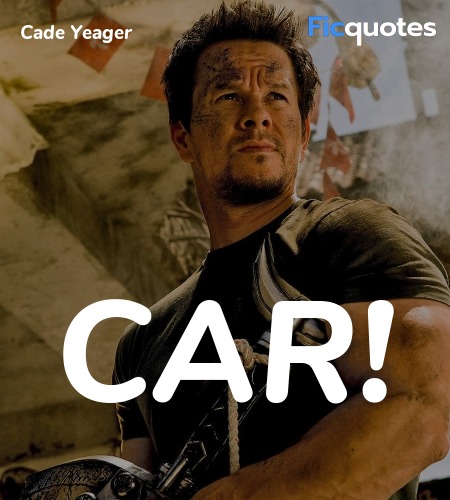 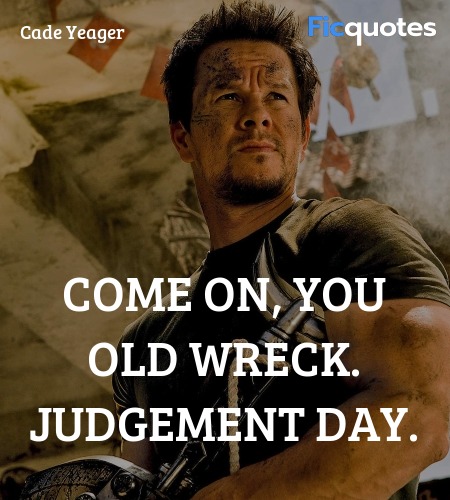 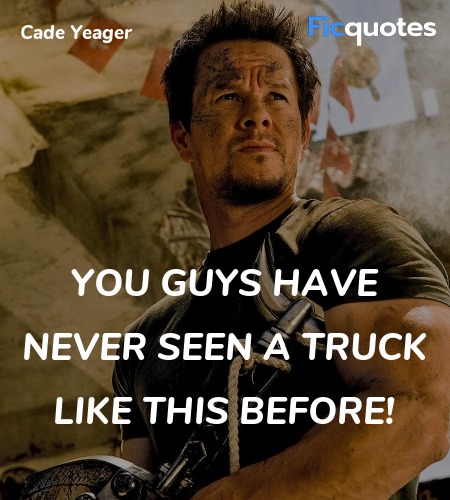 You guys have never seen a truck like this before! 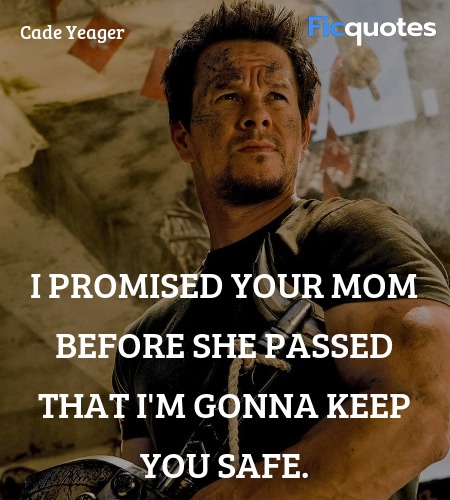 I promised your mom before she passed that I'm gonna keep you safe.

He almost ate me!

How do you say "Get the fuck out of the way" in Chinese?

Lockdown : I intend to.

Joshua! JOSHUA! You have to contain it!

They live, they talk, we're dead! Kill them all!

We got a rule about messing with people from Texas.

Harold Attinger : You haven't said what you want him for.
Lockdown : Every galaxy I have traveled, all you species are the same. You all think you're the center of the universe. You have no idea

Gill Wembley : Galvatron was...
Joshua Joyce : A fiasco. An embarrassment. And he spoke, how did that happen? You know what a flaw is, Wembley? A flaw is a total failure. I do not have control over my prototype, and I want to know why!
ell, this is a great place to hide, a big glass box! Nobody will find us here.

A new era has begun. The age of the Transformers is over...

Dad! There's a missile in the family room!

You got your ass kicked by a garage inventor from Texas! That goes on your resume!

Our world will never truly be safe till all of them are gone.

Bumblebee : You gotta listen...
Tessa Yeager : No, YOU listen! I'm not leaving my dad!

Harold Attinger : Autobots at this location... Prime is close... Do whatever you have to do.

Lockdown : Where is my escaped bounty?

Cade Yeager : How fast can this thing go?
Drift : Very fast. It's a spaceship.

Optimus Prime : How many more of my kind must be sacrificed, to atone for YOUR mistakes?
Cade Yeager : What do you think being human means? That's what we do. We make mistakes. Sometimes, out of those mistakes come the most amazing things... When I fixed you, it was for a reward. That was it. That was why. The money. And it was me making a mistake. Without it, you wouldn't be here. So even if you got no faith in us, I'm asking you to do what I do. I'm asking you to look at all the junk and see the treasure. You gotta have faith, Prime, in who we can be.

Optimus Prime : Cade, why are you willing to help me?
Cade Yeager : Cause you trust me to.

Sweetie, hand me my alien gun!

Cade Yeager : Teenagers...
Optimus Prime : I went through the same thing with Bumblebee.

Cade Yeager : We're going to save Prime!
Crosshairs : Why should we? What's in it for me?

Hound : What's in it for you is I don't kill ya. We're gettin' the boss back, and the girl!

Harold Attinger : We had a deal! You got what you wanted!
Joshua Joyce : I got what IT wanted!

Joshua Joyce :What did you touch?
Bumblebee : "I told you homeboy! You can't touch this!"

Joshua Joyce : The original Bumblebee was inferior in every way!
Bumblebee : You motherfucker!

Joshua Joyce : Threatening a professional CIA killer. Possibly not my finest hour. I'd like to have that one back.
Darcy Tirrel : Killer? I thought they were your friends!
Joshua Joyce : No. Not friends. Business. They gave me this bomb.
Su Yueming : Bomb? Is there a bomb in the bag?
Darcy Tirrel : Yes, there's a bomb in the bag.
Su Yueming : Shit!

Joshua Joyce : What we do here is science. Because if we don't do it, somebody else will. Because you cannot stop technology.
Optimus Prime : We are NOT your technology!

Cade Yeager : When you said you were done fighting for humans, you didn't mean that, did you?

I can't... This is really happening. A man, me, who is worth over 20 billion dollars is now being chased by CIA assassins. That's the truth. And in the middle of a robot uprising. And I'm carrying what is, in essence, a tactical nuke. And the great thing is I... The great thing is that I'm, I'm barely feeling any jetlag!

Why can't we make what we want to make and make it RIGHT?