Six months after the battle against aliens in New York, Stark is experiencing panic attacks. He builds dozens of Iron Man suits. When Happy Hogan is injured in an attack by Terrorist Mandarin, Tony threatens Mandarin who in reply destroys Stark's home. While world believes him dead Tony vows revenge and goes in the search of Mandarin. There he finds some people from his past Aldrich Killian and Maya Hansen. 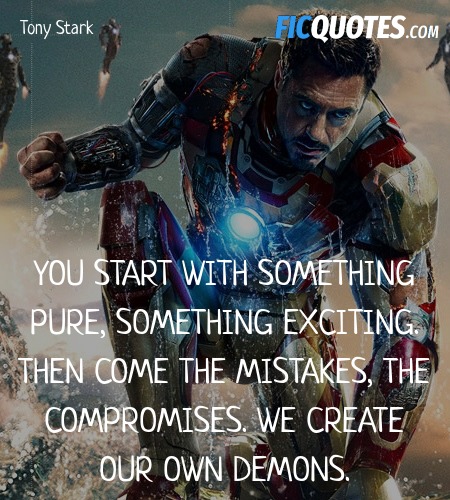 And so, as Christmas morning began, my journey has reached its end. You start with something pure, Something exciting. Then come the mistakes, the compromises. We create our own demons. As promised, I got Pepper sorted out. Took a little tinkering... but then I thought "why stop there?" Of course there are people who say progress is dangerous, but then I bet none of those idiots ever had to live with a chest full of shrapnel. And now, neither will I. Let me tell you: that was the best sleep I'd had in years. So if I were to wrap this up tie it with a bow or whatever, I guess I'd say my armor, it was never a distraction or a hobby, it was a cocoon. And now, I'm a changed man. You can take away my house, all my tricks and toys. One thing you can't take away...I am Iron Man. 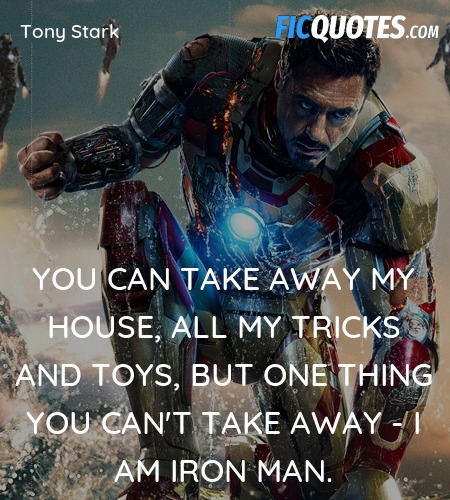 You can take away my house, all my tricks and toys, but one thing you can't take away - I am Iron Man.

Tony Stark: You walked right into this one: I've dated hotter chicks than you.
Ellen Brandt: Is that all you've got? A cheap trick and a cheesy one-liner?
Stark: Sweetheart, that could be the name of my autobiography!

You know, it's moments like these when I realize how much of a superhero I am. [suits up] 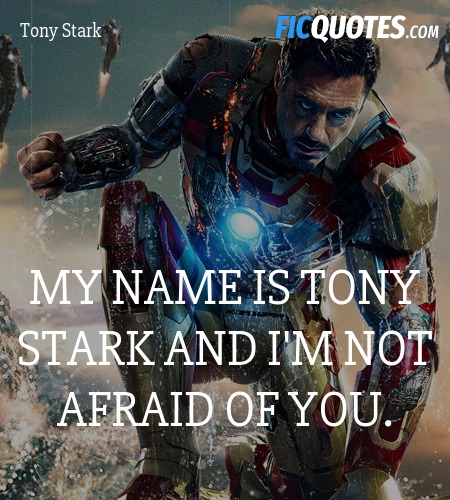 Here's a little Holiday greeting I've been wanting to send to the Mandarin. I just didn't know how to phrase it until now. My name is Tony Stark and I'm not afraid of you. I know you're a coward, so I decided that you just died, pal. I'm gonna come get the body. There's no politics here, it's just good old-fashioned revenge. There's no Pentagon. It's just you and me. And on the off-chance you're a man, here's my home address: 10880 Malibu Point, 90265. I will leave the door unlocked. That's what you wanted, right? 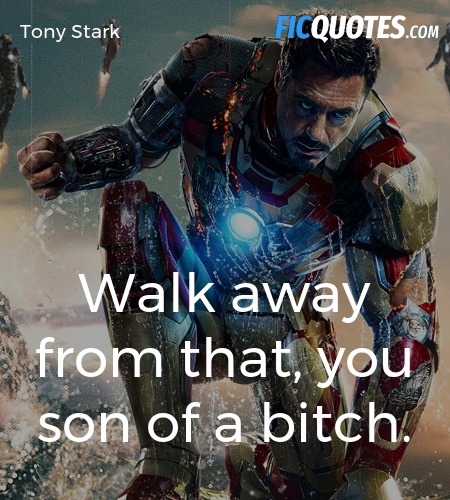 Walk away from that, you son of a bitch.

I am Tony Stark. I build neat stuff, got a great girl, occasionally save the world. So why can't I sleep?

Things are different now, I have to protect the one thing that I can't live without. That's you. [to Pepper Potts[

A famous man once said, "We create our own demons." Who said that? What does that even mean? Doesn't matter. I said it 'cause he said it. So now, he was famous and that basically getting said by two well-known guys. I don't, uh... I'm gonna start again. Let's track this from the beginning.

You're in a relationship with me, nothing will ever be okay. But I had this twenty years ago when I was drunk, I can sort it out. I fix stuff.

Tony Stark: Think about it. Six dead. Only five shadows.
Harley Keener: Yeah, people said these shadows are like the marks of souls going to heaven. Except the bomb guy. He went to hell, on account of he didn't get a shadow. That's why there's only five.
Tony Stark: You buy that?
Harley Keener: It's what everyone says.

Aldrich Killian: You know what my old man used to say to me? One of his favorite of many sayings, "The early bird gets the worm, but the second mouse gets the cheese."
Tony Stark: You are not still pissed about the Switzerland thing, are you?
Aldrich Killian: How can I be pissed at you, Tony? I’m here to thank you. You gave me the greatest gift that anybody’s ever given me. Desperation. If you think back to Switzerland, you said you’d meet me on the rooftop, right? Well for the first twenty minutes, I actually thought you’d show up. And the next hour, I…well I considered taking that one step shortcut to the lobby, if you know what I mean.
Tony Stark: Honestly, I'm still trying to figure out what happened to the first mouse.
Aldrich Killian: But as I looked out over that city, nobody knew I was there, nobody could see me, no one was even looking. I had a thought that would guide me for years to come. Anonymity, Tony. Thanks to you, it's been my mantra ever since, right? You simply rule from behind the scenes. Because the second you give evil a face, a Bin Laden, a Gaddafi, The Mandarin, you hand the people a target.
Tony Stark: You're something else.
Aldrich Killian: You have met him, I assume?

Savin: Hey, kid! What would you like for Christmas?
Harley: Mr. Stark, I am so sorry.
Savin: Nope. I think he was trying to say, "I want my goddamn file."

Remember that game, Barrel of Monkeys? This is how it is: we got to catch all the monkeys!

Tony Stark: Ladies, follow the mullet.
Maya Hansen: Thank you, I’ll call you.
Tony Stark: I’m titillated by the notion of working with you.
Aldrich Killian: Yeah?
Tony Stark: Yeah, cheese clown. I’m going to ditch these clowns; I’ll see you up on the roof in five minutes.

You experience things and then they're over, and you still can't explain them. Gods, aliens, other dimensions. I'm just a man in a can. The only reason I haven't cracked up is probably because you moved in. Which is great. I love you. I'm lucky. But honey, I can't sleep. You go to bed, I come down here. I do what I know. I tinker. Threat is imminent. And I have to protect the one thing that I can't live without. That's you. And my suits, they're Machines. They're part of me.

Your son didn't kill those people. He's not a murderer. He was used.

I thought things couldn't get any worse... then I turned on the TV. That's when he happened.

Is this the forehead of security?

Happy Hogan: You know, look... I got a real job. What do you want? I'm working. I've got something going on, here.
Tony Stark: What, harassing interns?
Happy Hogan: Let me tell you something. Do you know what happened when I told everyone I was Iron Man's bodyguard? They would laugh in my face. I had to leave while I still had a shred of dignity. Now I got a real job. I'm watching Pepper.

I loved you in "A Christmas Story," by the way.

A bomb is not a bomb when it's a misfire.

We hope you enjoyed reading our collection of Tony Stark quotes. You can also browse other Iron Man 3 quotes . If you think we missed any quote from Tony Stark or Iron Man 3, please send it to us.