T.E. Lawrence is played by Peter O'Toole in Lawrence of Arabia. 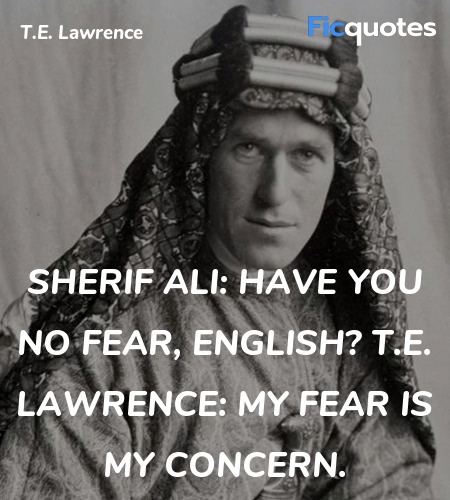 Sherif Ali: Have you no fear, English?
T.E. Lawrence: My fear is my concern. 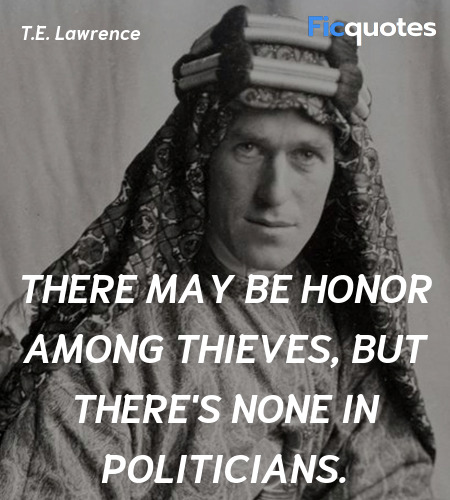 There may be honor among thieves, but there's none in politicians. 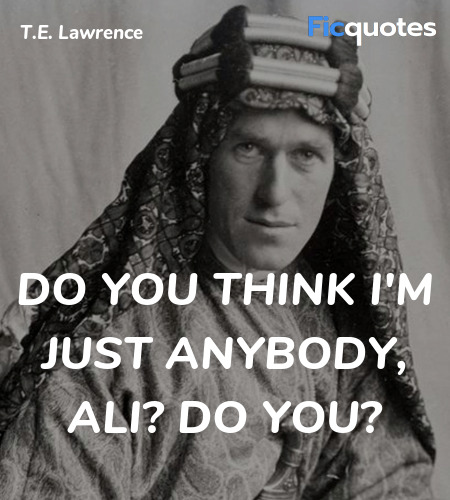 Do you think I'm just anybody, Ali? Do you? 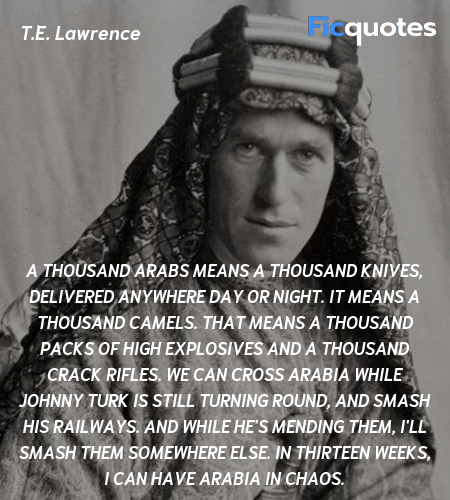 A thousand Arabs means a thousand knives, delivered anywhere day or night. It means a thousand camels. That means a thousand packs of high explosives and a thousand crack rifles. We can cross Arabia while Johnny Turk is still turning round, and smash his railways. And while he's mending them, I'll smash them somewhere else. In thirteen weeks, I can have Arabia in chaos.

The best of them won't come for money; they'll come for me.

Mr. Dryden: Lawrence, only two kinds of creature get fun in the desert: Bedouins and gods, and you're neither. Take it from me, for ordinary men, it's a burning, fiery furnace.
T.E. Lawrence: No, Dryden, it's going to be fun.
Mr. Dryden: It is recognized that you have a funny sense of fun.

Cross my heart and hope to die, it's all perfectly true.

Prince Feisal: Ah yes, then Lawrence is a sword with two edges... we are equally glad to be rid of him are we not?
General Allenby: I thought I was a hard man, sir.
Prince Feisal: You are merely a General... I must be a king.

General Allenby: I fight like Clausewitz, then you fight like Saxe!
T.E. Lawrence: We should do very well, then, shouldn't we?

Mr. Dryden: Well. It seems we're to have a British waterworks with an Arab flag on it. Do you think it was worth it?
General Allenby: Not my business. Thank God I'm a soldier.
Mr. Dryden: Yes, sir. So you keep saying.

Prince Feisal: My friend Lawrence, if I may call him that. "My friend Lawrence". How many men will claim the right to use that phrase? How proudly! He longs for the greenness of his native land. He pines for the Gothic cottages of Surrey, is it not? Already in imagination, he catches trout and engages in all the activities of the English gentleman.
General Allenby: That's me you're describing, sir, not Colonel Lawrence.

General Allenby: You acted without orders, you know.
T.E. Lawrence: Shouldn't officers use their initiative at all times?
General Allenby: Not really. It's awfully dangerous.

General Allenby: I thought I was a hard man, sir.
Prince Feisal: You are merely a general. I must be a king.

Colonel Brighton: Look, sir, we can't just do nothing.
General Allenby: Why not? It's usually best.

So long as the Arabs fight tribe against tribe, so long will they be a little people, a silly people - greedy, barbarous, and cruel, as you are.

Jackson Bentley: What is it, Major Lawrence, that attracts you personally to the desert?
T.E. Lawrence: It's clean.

T.E. Lawrence: No, they're still there, but they've no boots. Prisoners, sir. We took them prisoners; the entire garrison. No, that's not true. We killed some; too many, really. I'll manage it better next time. There's been a lot of killing, one way or another.
T.E. Lawrence: Cross my heart and hope to die, it's all perfectly true.

Club Secretary: I say, Lawrence. You are a clown!
T.E. Lawrence: Ah, well, we can't all be lion tamers.

Colonel Brighton: Are you badly hurt?
T.E. Lawrence: I'm not hurt at all. Didn't you know? They can only kill me with a golden bullet.

The truth is: I'm an ordinary man. You might've told me that, Dryden.

I cannot fiddle but I can make a great state of a small city.

I pray that I may never see the desert again. Hear me, God.

Sherif Ali: What is your name?
T.E. Lawrence: My name is for my friends. None of my friends is a murderer!