Latest Sarah quotes from Day of the Dead (1985) 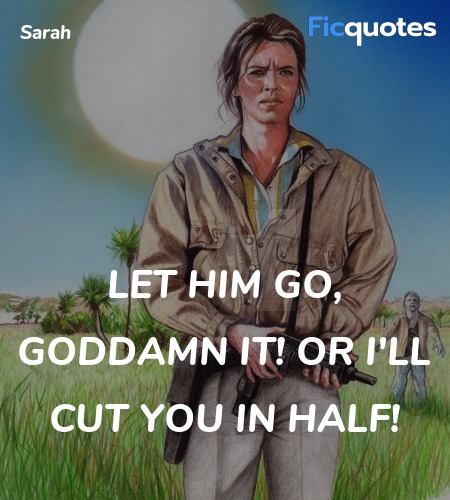 Let him go, goddamn it! Or I'll cut you in half!

Ted Fisher : What's he trying to prove? I once saw one of those things sitting behind the wheel of a car in D.C. trying to drive down Independence Avenue. It didn't make me want to be its friend.
Sarah : No, it isn't what this one does, but what he doesn't do! He doesn't get excited or agitated when Logan enters the room! He doesn't see Logan as...
Ted Fisher : Lunch.
Sarah : Dinner.
Ted Fisher : Breakfast. 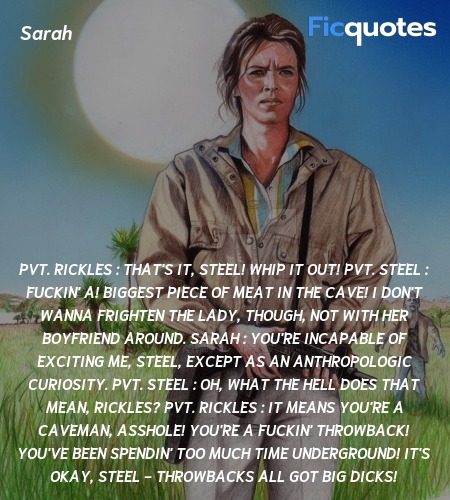 Pvt. Rickles : That's it, Steel! Whip it out!
Pvt. Steel : Fuckin' A! Biggest piece of meat in the cave! I don't wanna frighten the lady, though, not with her boyfriend around.
Sarah : You're incapable of exciting me, Steel, except as an anthropologic curiosity.
Pvt. Steel : Oh, what the hell does that mean, Rickles?
Pvt. Rickles : It means you're a caveman, asshole! You're a fuckin' throwback! You've been spendin' too much time underground! It's okay, Steel - throwbacks all got big dicks!

Sarah : Don't worry. It wont come to that. By the way, where is Logan?
Ted Fisher : You mean Frankenstein? He's in laboratory. Where else?