Noah Vosen is played by David Strathairn in The Bourne Ultimatum (2007). 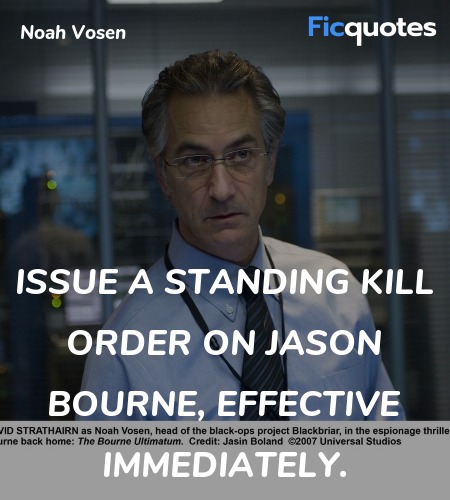 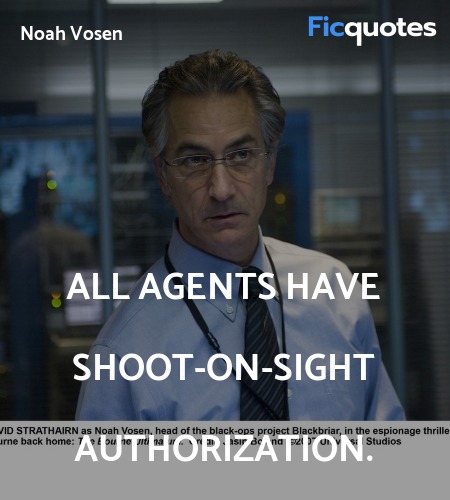 All agents have shoot-on-sight authorization.

You know as well as I do decisions made in real time are never perfect. Don't second guess an operation from an armchair.

Pamela Landy : What is Operation Blackbriar? You want to tell me or should I call Kramer and ask him?
Noah Vosen : For Christ's sake Pam, we're in the middle of an operation.
Pamela Landy : Bullshit. You want Jason Bourne? Level with me.
Noah Vosen : Operation Blackbriar started as an NEAT surveillance program.
Pamela Landy : What is it now?
Noah Vosen : It is now the umbrella program for all our black-ops. Full envelope intrusion, rendition, experimental interrogation - it is all run out of this office. We are the sharp end of the stick now, Pam.
Pamela Landy : Lethal action?
Noah Vosen : If we have to, sure. That's what makes us special. No more red tape. No more getting the bad guys caught on our sights, then watching them escape while we wait for somebody in Washington to issue the order.
Noah Vosen : Oh come on. You've seen the raw intel, Pam. You know how real the danger is. We need these programs now.

Our target is a British national - Simon Ross, a reporter. I want all his phones, his BlackBerry, his apartment, his car, bank accounts, credit cards, travel patterns - I want to know what he's going to think before he does. Every dirty little secret he has, and most of all we want the name and real-time location of his source. This is NSA priority level 4. Any questions?

Noah Vosen : Is that it?
Wills : Yeah.
Noah Vosen : I want rendition protocols, and put the asset on stand-by just in case.