Jack is played by Jacob Tremblay in Room. 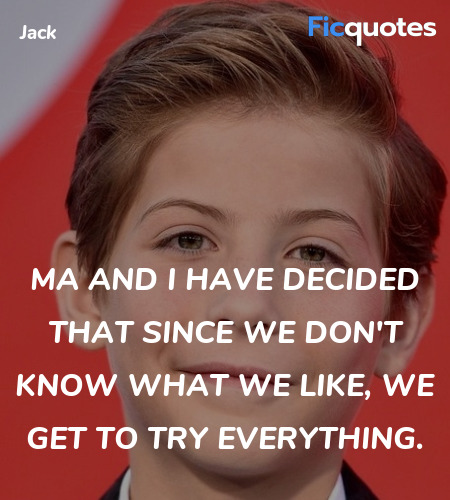 Ma and I have decided that since we don't know what we like, we get to try everything. 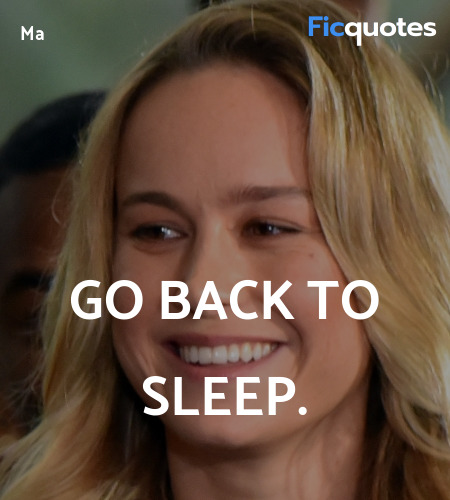 Go back to sleep. 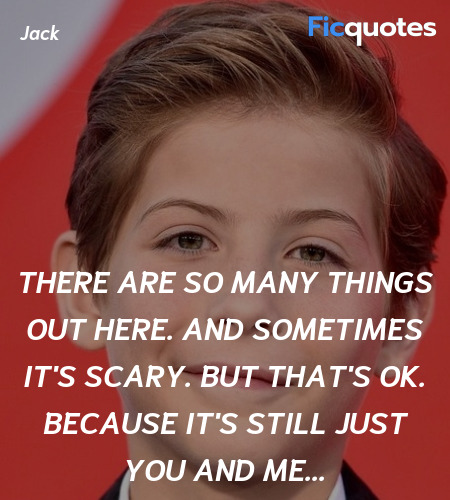 There are so many things out here. And sometimes it's scary. But that's ok. Because it's still just you and me... 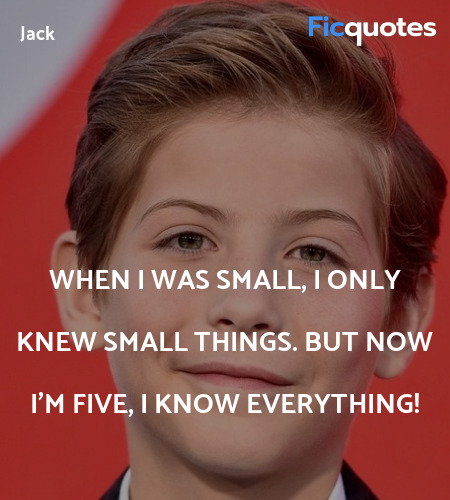 When I was small, I only knew small things. But now I'm five, I know everything!

There's so much of "place" in the world. There's less time because the time has to be spread extra thin over all the places, like butter. so all the persons say "Hurry up! Let's get going! Pick up the pace! Finish up now!". Ma was in a hurry to go "boing" up to Heaven, but she forgot me. Dumbo Ma! So the aliens threw her back down. CRASH! And broke her.

You got soup in my eye.

One, two, three... There's room, then outer space, with all the TV planets, then heaven. Plant is real, but not trees. Spiders are real, and one time the mosquito that was sucking my blood. But squirrels and dogs are just TV, except lucky. He's my dog who might come some day. Monsters are too big to be real, and the sea. TV persons are flat and made of colors. But me and you are real.

Eggsnake's our longest friend and fanciest. Meltedy spoon's the best to eat with because he's more blobbier. Labyrinth is the twistiest and she hides things so I don't know where they are. Toilet's the best at disappearing poo. Lamp's the brightest, except when the power's cut. You're the best at reading and songs and lots, except if you're having a gone day. I'm the best at drawing, and jumping, and growing, and nearly everything!

When I was four, I didn't even know about the world, and now me and ma are going to live in it forever and ever until we're dead. This is a street in a city in a country called America, and earth. That's a blue and green planet, always spinning, so I don't know why we don't fall off. Then, there's outer space. And nobody knows where's heaven. Ma and I have decided that because we don't know what we like, we get to try everything. There are so many things out here. And sometimes, it's scary, but that's okay, because it's still just you and me.

I've been in the world 37 hours. I've seen pancakes, and a stairs, and birds, and windows, and hundreds of cars. And clouds, and police, and doctors, and grandma and grandpa. But Ma says they don't live together in the hammock house anymore. Grandma lives there with her friend Leo now. And Grandpa lives far away. I've seen persons with different faces, and bigness, and smells, talking all together. The world's like all TV planets on at the same time, so I don't know which way to look and listen. There's doors and... more doors. And behind all the doors, there's another inside, and another outside. And things happen, happen, HAPPENING. It never stops. Plus, the world's always changing brightness, and hotness. And there's invisible germs floating everywhere. When I was small, I only knew small things. But now I'm five, I know EVERYTHING!

You know when your Grandma asks you a question? You can answer her. You don't need to say everything to me, okay?

Ma: He's on the other side of this wall.
Jack: What other side?
Ma: Jack, there's two sides to everything.
Jack: Not on an octagon.
Ma: Yeah, but...
Jack: An octagon has eight sides
Ma: But a wall, okay, a wall's like this, see? And we're on the inside and mouse is on the outside.
Jack: In outer space?
Ma: No, in the world. It's much closer than outer space.
Jack: I can't see the outside-side.
Ma: Listen, I know that I told you something else before, but you were much younger. I didn't think that you could understand, but now you're so old, you're so smart. I know that you can get this. Where do you think that old Nick gets our food?
Jack: From TV by magic!

Ma: You're five and you're old enough to understand what the world there is. You have to understand. YOU HAVE TO UNDERSTAND. We can't keep living like this. You need to help me.
Jack: I wanna be four again.

I'm sorry that I'm not nice anymore, but you know what? Maybe if your voice saying "be nice" hadn't been in my head, then maybe I wouldn't have helped the guy with the fucking sick dog!

Jack: Is bad tooth hurting?
Ma: Mmhmm, but you know mind over matter.
Jack: If you don't mind, it doesn't matter
Ma: You're right. Hey do you know what we're gonna do today?
Jack: What?
Ma: We're going to bake a birthday cake
Jack: A birthday cake?
Ma: Mmhmm
Jack: Like from TV?
Ma: Mmhmm, but for real
Jack: No way!

Jack: Are we in another planet?
Ma: Same one. Just a different spot.

Ma: Ssh. Go back to sleep.
Jack: Once upon a time, before I came, you cried and cried and watched TV all day, until you were a zombie. But then I zoomed down from heaven, through skylight, into Room. Whoosh-pshew! And I was kicking you from the inside. Boom, boom! And then I shot out onto Rug with my eyes wide open, and you cutt-ed the cord and said, "Hello, Jack!"

We hope you enjoyed reading our collection of Jack quotes. You can also browse other Room quotes . If you think we missed any quote from Jack or Room, please send it to us.