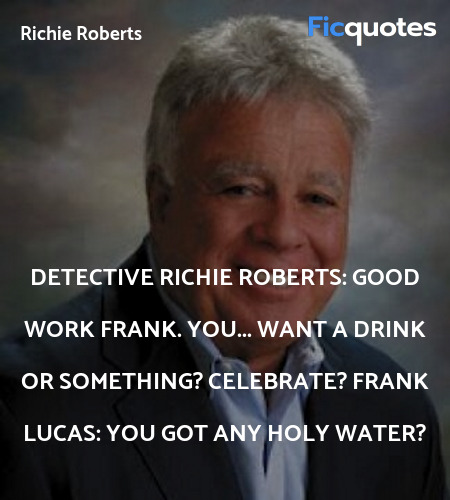 Detective Richie Roberts: Good work Frank. You... want a drink or something? Celebrate?
Frank Lucas: You got any holy water? 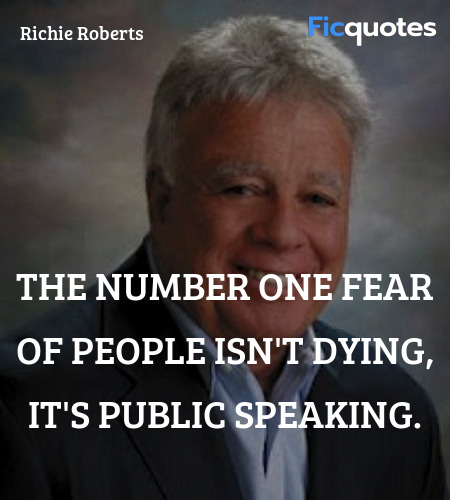 The number one fear of people isn't dying, it's public speaking. 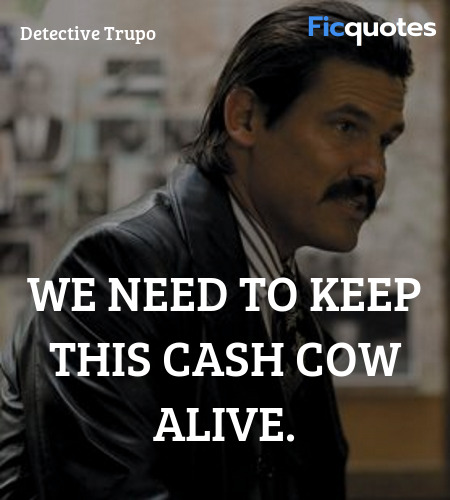 We need to keep this cash cow alive. 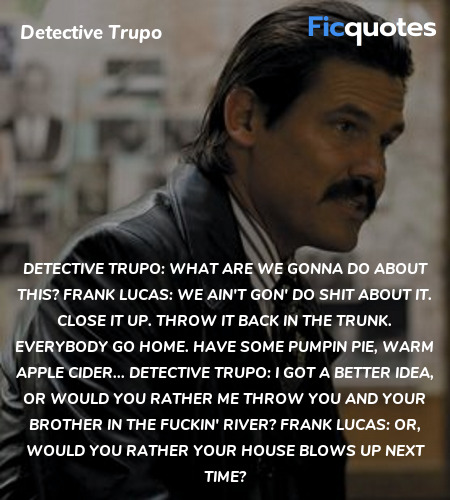 Detective Trupo: What are we gonna do about this?
Frank Lucas: We ain't gon' do shit about it. Close it up. Throw it back in the trunk. Everybody go home. Have some pumpin pie, warm apple cider...
Detective Trupo: I got a better idea, or would you rather me throw you and your brother in the fuckin' river?
Frank Lucas: Or, would you rather your house blows up next time?

What the fuck is a microwave?

Bagels and blinches: they will catch up with you, you know?

His seats were phenomenal better seats than Dominic Cattano, Joe Louis shook his hand, who the fuck is this guy?

They don't want this to stop. It employs too many people. Cops, lawyers, judges, probation officers, prison guards... The day dope stops coming into this country, a hundred thousand people lose their jobs.

Frank Lucas: Now, I got no problem with you showin' up in court tomorrow with your head blown in half.
Detective Richie Roberts: Get in line. That one stretches around the block too.

This is my home. My country. Frank Lucas don't run from nobody. This is America.

When was the last time I was in New Jersey? Let me think, never, what are you doing coming over here unannounced? You think you're going to get hurt doing that? you got your fucking money, never come into this city unannounced, you come to the city to see a fucking Broadway show, you call ahead first to see if it's ok with me

Redtop: What's the matter? Ain't you niggas never seen naked coochie before?
Huey Lucas: Why they all naked?
Frank Lucas: So they can't steal nothin'.

See, ya are what ya are in this world. That's either one of two things: Either you're somebody, or you ain't nobody.

The most important thing in business is honesty, integrity, hardwork... family... never forgetting where we came from.

The man I worked for, he had one of the biggest companies in New York City- he ran it for more than fifty years. Fifteen years, eight months, nine days- I was with him every day. I looked after him, took care of him, protected him... I learned from him. Bumpy was rich, but he wasn't white man rich, you see he wasn't wealthy. He didn't own his own company. He thought he did, but he didn't. He just managed it. White man owned it so they owned him. Nobody owns me, though. Because I own my company. And my company sells a product that's better than the competition at a price that's lower than the competition.

I got possession, supply, conspiracy, bribing a law officer, I got your offshore bank accounts, your real estate, your businesses, all bought with money from heroin, I got hundreds of parents from dead kids, addicts who OD'ED and that's my story, that's how I make it all stick for the jury, this man murdered thousands of people and he did it from a penthouse driving a Lincoln, I got a line people wanting to testify against you that stretches out the door and around the block

I swear, I will pull out my gun and put a bullet in your fuckin' head!

Frank Lucas is the most dangerous man walking the streets of our city.

This is the newly formed Essex County narcotics squad, our mandate is to make major arrests, no street guys, we're looking for the suppliers and distributors, Heroin, Cocaine, Amphetamines, no grass under a thousand pounds, no powder under forty kilograms, any less than that we're going to waste our time, we're going to handling the big shipments, the big money, the big temptation

My man. You know what normal is to me? I ain't see normal since I was 6 years old. Normal is seeing the police ride up to my house, dragging my 12 year old cousin out and tying him to a pole, shoving a shotgun in his mouth so hard they bust his teeth, then they bust two shotgun shells in his head, knocking it off. That's what normal is to me. Didn't give a fuck about no police then... Don't give a fuck about no police now.

His name is Frank Lucas, originally from Greensboro, North Carolina, he has a couple of arrests years ago for gambling and for carrying an unlicensed firearm. For fifteen years he was Bumpy Johnson's driver, bodyguard and collector. Hhe was with him when he died, he has five brothers, he's the oldest and a lot of cousins, they're all living up here now, spread out in the five boroughs and New Jersey. His brother's businesses are the distribution and collection points of Frank's dope and his money. Everything about Frank's life seems unpretentious and broadly legitimate, he starts early, gets up at 5am, has breakfast in a diner in Harlem usually by himself, then he starts work, takes a meeting with his accountant and with his lawyer. At nights he usually stays at home, if he does go out, it's only one of two clubs or a handful of restaurants with his wife, ball players, musicians and his friends and never organized crime guys. Sundays he takes his mother to church and changes the flowers on Bumpy's grave, every Sunday no matter what.

Detective Richie Roberts: Laurie, look, I'm sorry I never gave you the kind of life you wanted, all right.I'm sorry it was never enough.Don't punish me for being honest.Don't take my boy away.
Laurie Roberts: What are you saying? That because you were honest and you didn't take money like every other cop, I left you? No, you don't take money for one reason. To buy being dishonest about everything else. And that's worse than taking money nobody gives a shit about.Drug money, gambling money nobody's gonna miss. You know, I'd rather you took it and been honest with me. Or don't take it. I don't care. But then don't go cheat on me.Don't cheat on your kid by never being around. Don't go out and get laid by your snitches and your secretaries and strippers.I can tell by just looking,she's one of them. You think you're going to heaven because you're honest, but you're not You're going to the same hell as the crooked cops you can't stand.

I got Harlem. I took care of Harlem, so Harlem's gonna take care of me.

You are what you are and that's one of two things. You're nothing... or you're something. Understand what I'm saying?

Bumpy Johnson may have been rich, but he wasn't white man rich. He wasn't wealthy.

This is my home. This is where my business is, my wife, my mother, my family. This is my country, I ain't goin' nowhere.

Even a fool gets to be young once.

I've been paying off Johnny law since I was ten years old I put more kids through college than the National Merit Award this is different though, these special investigative unit that's their problem they think their "special"

I don't care what you call it, put a choke-hold on the motherfucker and call it Blue Dog Shit.