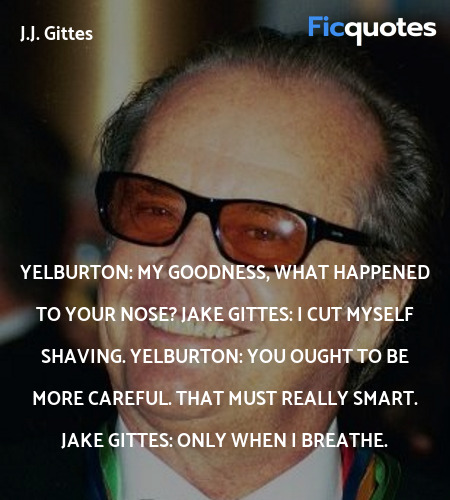 Yelburton: My goodness, what happened to your nose?
Jake Gittes: I cut myself shaving.
Yelburton: You ought to be more careful. That must really smart.
Jake Gittes: Only when I breathe. 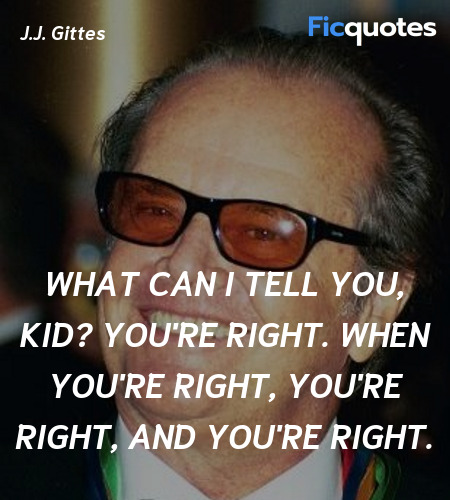 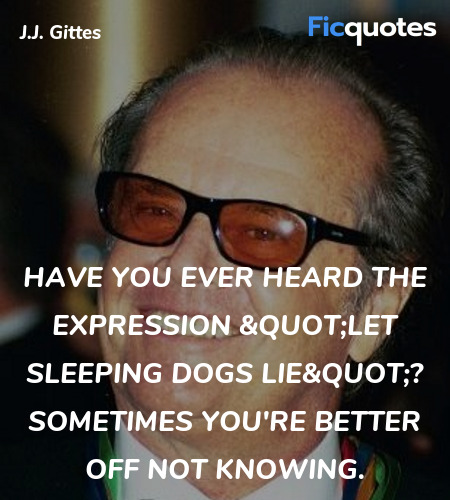 Have you ever heard the expression "Let sleeping dogs lie"? Sometimes you're better off not knowing. 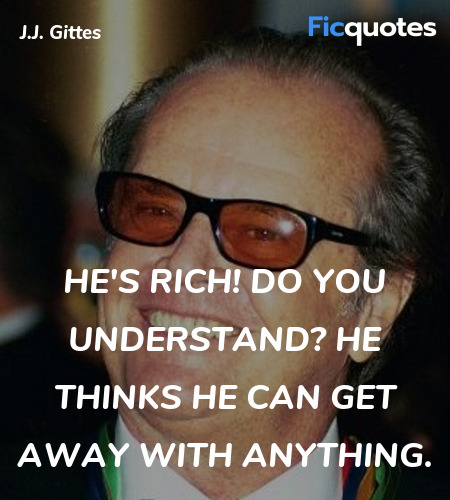 He's rich! Do you understand? He thinks he can get away with anything.

Jake Gittes: Evelyn, put that gun away. Let the police handle this.
Evelyn Mulwray: He owns the police!

I see you like publicity, Mr. Gittes. Well, you're going to get it.

Jake Gittes: How much are you worth?
Noah Cross: I have no idea. How much do you want?
Jake Gittes: I just wanna know what you're worth. More than 10 million?
Noah Cross: Oh my, yes!
Jake Gittes: Why are you doing it? How much better can you eat? What could you buy that you can't already afford?
Noah Cross: The future, Mr. Gittes! The future. Now, where's the girl? I want the only daughter I've got left. As you found out, Evelyn was lost to me a long time ago.
Jake Gittes: Who do you blame for that? Her?
Noah Cross: I don't blame myself. You see, Mr. Gittes, most people never have to face the fact that at the right time and the right place, they're capable of ANYTHING.

Noah Cross: You may think you know what you're dealing with, but, believe me, you don't.
Noah Cross: Why is that funny?
Jake Gittes: That's what the District Attorney used to tell me in Chinatown.

Noah Cross: Exactly what do you know about me? Sit down.
Jake Gittes: Mainly that you're rich, too respectable to want your name in the newspapers.
Noah Cross: Of course I'm respectable I'm old! Politicians ugly buildings and whores all get respectable if they last long enough.

Noah Cross: I hope you don't mind. I believe they should be served with the head.
Jake Gittes: Fine... long as you don't serve the chicken that way.

You've got a nasty reputation, Mr. Gittes. I like that.

Lt. Escobar: How'd you get past the guard?
Jake Gittes: Well, to tell you the truth, I lied a little.

Lt. Escobar: Isn't that your phone number?
Jake Gittes: Is it? I forget. I don't call myself that often.

Jake Gittes: What the hell is going on here, Lou?
Lt. Escobar: I don't know. What's going on? What's happening with you?

Jake Gittes: There's no point in getting tough with me. I'm just...
Evelyn Mulwray: I don't get tough with anyone, Mr. Gittes. My lawyer does.

Jake Gittes: May I speak frankly, Mrs. Mulwray.
Evelyn Mulwray: You may if you can, Mr. Gittes.

Ida Sessions: Are you alone?
Jake Gittes: Isn't everybody?

Evelyn Mulwray: Hollis seems to think you're an innocent man.
Jake Gittes: Well, I've been accused of a lot of things before, Mrs. Mulwray, but never that.

Let me explain something to you, Walsh. This business requires a certain amount of finesse.

Hello, Claude. Where'd you get the midget?

All right, Curly. Enough's enough. You can't eat the Venetian blinds. I just had them installed on Wednesday.

Jake Gittes: Do you accept people of the Jewish persuasion?
Mr. Palmer: I'm sorry, we do not.
Jake Gittes: Don't apologize - neither does Dad.

Lt. Escobar: How'd you get past the guard?
Jake Gittes: Well, to tell you the truth, I lied a little.

But, Mrs. Mulwray, I goddamn near lost my nose. And I like it. I like breathing through it. And I still think you're hiding something.

We hope you enjoyed reading Chinatown quotes. Browse other movie quotes on Ficquotes also. If you think we missed any quote from Chinatown, please send it to us so we can expand our collection of the best Chinatown quotes.