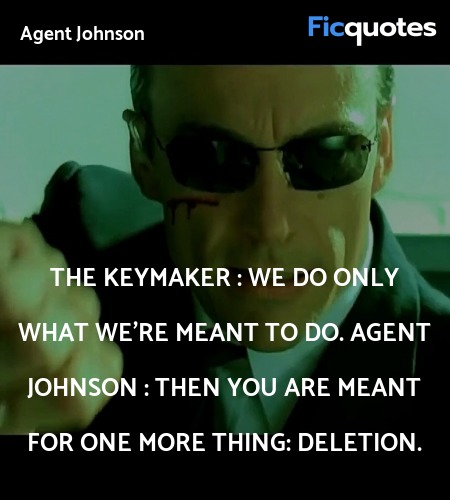 The Keymaker : We do only what we're meant to do.
Agent Johnson : Then you are meant for one more thing: deletion. 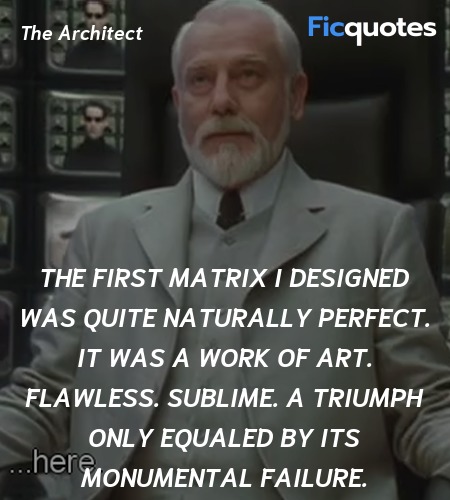 The first matrix I designed was quite naturally perfect. It was a work of art. Flawless. Sublime. A triumph only equaled by its monumental failure.

There are levels of survival we are prepared to accept. However, the relevant issue is whether or not you are ready to accept the responsibility for the death of every human being in this world.

Merovingian : It is only a game.
Persephone : So is this... Have fun!

They come from a much older version of the Matrix, but like so many back then they caused more problems than they solved. My husband saved them because they are notoriously difficult to terminate. How many people keep silver bullets in their gun?

I envy you. But such a thing is not meant to last.

Persephone : Where are you going?
Merovingian : Please, ma cherie. I have told you. We are all victims of causality. I drank too much wine, I must take a piss. Cause and effect.

Power Station Guard #1 : Hey. You count sheep at home.
Security Bunker Guard #2 : Why? I get paid to count them here.

Neo : If I were you, I would hope we don't meet again.
The Architect : We won't.

The Architect : As I was saying, she stumbled upon a solution whereby nearly ninety-nine percent of the test subjects accepted the program provided they were given a choice - even if they were only aware of it at a near-unconscious level. While this solution worked, it was fundamentally flawed, creating the otherwise contradictory systemic anomaly, that, if left unchecked, might threaten the system itself. Ergo, those who refused the program, while a minority, would constitute an escalating probability of disaster.
Neo : This is about Zion.

There are two doors. The door to your right leads to the Source and the salvation of Zion. The door to your left leads back to the Matrix, to her... and to the end of your species. As you adequately put, the problem is choice. But we already know what you are going to do, don't we? Already I can see the chain reaction: the chemical precursors that signal the onset of an emotion, designed specifically to overwhelm logic and reason. An emotion that is already blinding you to the simple and obvious truth: she is going to die and there is nothing you can do to stop it.

Humph. Hope, it is the quintessential human delusion, simultaneously the source of your greatest strength, and your greatest weakness.

The Architect : You are here because Zion is about to be destroyed. Its every living inhabitant terminated, its entire existence eradicated.
Neo : Bullshit.
The Architect : Denial is the most predictable of all human responses. But, rest assured, this will be the sixth time we have destroyed it, and we have become exceedingly efficient at it.