Tom Mullen is played by Mel Gibson in Ransom. 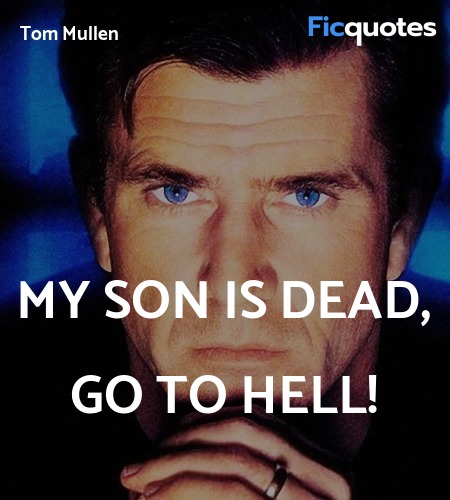 My son is dead, go to hell! 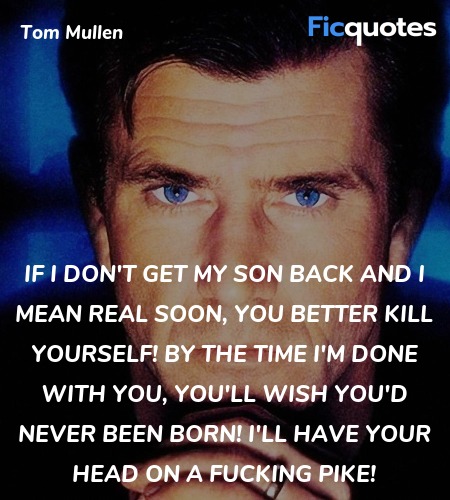 If I don't get my son back and I mean real soon, you better kill yourself! By the time I'm done with you, you'll wish you'd never been born! I'll have your head on a fucking pike! 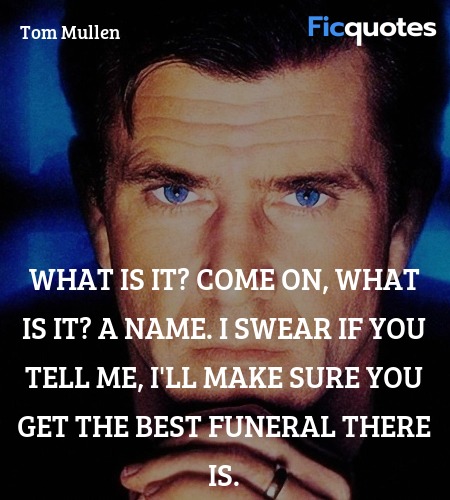 What is it? Come on, what is it? A name. I swear if you tell me, I'll make sure you get the best funeral there is.

The whole world now knows... my son, Sean Mullen, was kidnapped, for ransom, three days ago. This is a recent photograph of him. Sean, if you're watching, we love you. And this... well, this is what waits for the man that took him. This is your ransom. Two million dollars in unmarked bills, just like you wanted. But this is as close as you'll ever get to it. You'll never see one dollar of this money, because no ransom will ever be paid for my son. Not one dime, not one penny. Instead, I'm offering this money as a reward on your head. Dead or alive, it doesn't matter. So congratulations, you've just become a two million dollar lottery ticket... except the odds are much, much better. Do you know anyone that wouldn't turn you in for two million dollars? I don't think you do. I doubt it. So wherever you go and whatever you do, this money will be tracking you down for all time. And to ensure that it does, to keep interest alive, I'm running a full-page ad in every major newspaper every Sunday... for as long as it takes. But... and this is your last chance... you return my son, alive, uninjured, I'll withdraw the bounty. With any luck you can simply disappear. Understand... you will never see this money. Not one dollar. So you still have a chance to do the right thing. If you don't, well, then, God be with you, because nobody else on this Earth will be.

We hope you enjoyed reading our collection of Tom Mullen quotes. You can also browse other Ransom quotes . If you think we missed any quote from Tom Mullen or Ransom, please send it to us.