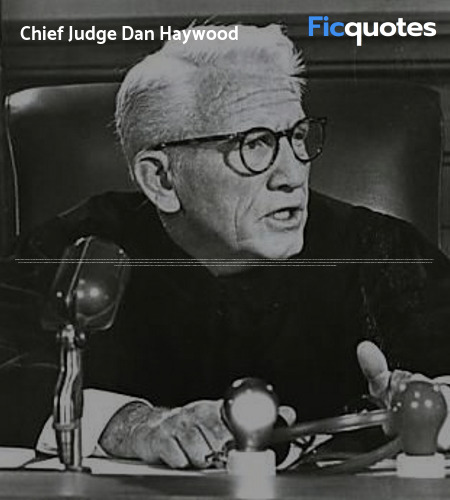 Janning, to be sure, is a tragic figure. We believe he loathed the evil he did. But compassion for the present torture of his soul must not beget forgetfulness of the torture and death of millions by the government of which he was a part. Janning's record and his fate illuminate the most shattering truth that has emerged from this trial. If he and the other defendants were all depraved perverts - if the leaders of the Third Reich were sadistic monsters and maniacs - these events would have no more moral significance than an earthquake or other natural catastrophes. But this trial has shown that under the stress of a national crisis, men - even able and extraordinary men - can delude themselves into the commission of crimes and atrocities so vast and heinous as to stagger the imagination. No one who has sat through this trial can ever forget. The sterilization of men because of their political beliefs... The murder of children... How *easily* that can happen! There are those in our country today, too, who speak of the "protection" of the country. Of "survival". The answer to that is: survival as what? A country isn't a rock. And it isn't an extension of one's self. It's what it stands for, when standing for something is the most difficult! Before the people of the world - let it now be noted in our decision here that this is what we stand for: justice, truth... and the value of a single human being! 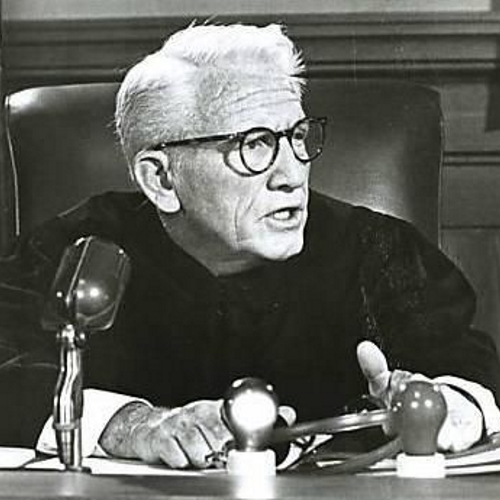 Ernst Janning: Judge Haywood... the reason I asked you to come: Those people, those millions of people... I never knew it would come to that. You must believe it, You must believe it!
Judge Dan Haywood: Herr Janning, it "came to that" the first time you sentenced a man to death you knew to be innocent.

Judge Dan Haywood: Herr Janning, you may proceed.
Ernst Janning: I wish to testify about the Feldenstein case because it was the most significant trial of the period. It is important not only for the tribunal to understand it, but for the whole German people. But in order to understand it, one must understand the period in which it happened. There was a fever over the land, a fever of disgrace, of indignity, of hunger. We had a democracy, yes, but it was torn by elements within. Above all there was fear, fear of today, fear of tomorrow, fear of our neighbors, and fear of ourselves. Only when you understand that can you understand what Hitler meant to us, because he said to us: "Lift your heads. Be proud to be German. There are devils among us, communists, liberals, Jews, gypsies. Once these devils will be destroyed your misery will be destroyed." It was the old, old story of the sacrificial lamb. What about those of us who knew better, we who knew the words were lies and worse than lies? Why did we sit silent? Why did we take part? Because we loved our country. What difference does it make if a few political extremists lose their rights? What difference does it make if a few racial minorities lose their rights? It is only a passing phase. It is only a stage we are going through. It will be discarded sooner or later. Hitler himself will be discarded - sooner or later. The country is in danger. We will march out of the shadows! We will go forward. FORWARD is the great password. And history tells how well we succeeded, Your Honor. We succeeded beyond out wildest dreams. The very elements of hate and power about Hitler that mesmerized Germany, mesmerized the world. We found ourselves with sudden powerful allies. Things that had been denied to us as a democracy were open to us now. The world said, "Go ahead. Take it. Take it! Take Sudetenland! Take the Rhineland! Re-militarize it! Take all of Austria! Take it!" And then, one day we looked around and found that we were in an even more terrible danger. The ritual begun in this courtroom swept over the land like a raging, roaring disease. What was going to be a "passing phase" had become the way of life. Your Honor, I was content to sit silent during this trial. I was content to tend my roses. I was even content to let counsel try to save my name, until I realized that in order to save it, he would have to raise the specter again. You have seen him do it. He has done it, here, in this courtroom. He has suggested that the Third Reich worked for the benefit of people. He has suggested that we sterilized men for the welfare of the country. He has suggested that perhaps the old Jew did sleep with the 16 year old girl after all. Once more, it is being done - for love of country. It is not easy to tell the truth. But if there is to be any salvation for Germany, we who know our guilt must admit it - whatever the pain and humiliation. I had reached my verdict on the Feldenstein case before I ever came into the courtroom. I would have found him guilty, whatever the evidence. It was not a trial at all. It was a sacrificial ritual in which Feldenstein, the Jew, was the helpless victim.
Hans Rolfe: Your Honor, I must interrupt. The defendant is not aware of what he's saying. He's not aware of the implications!
Ernst Janning: I am aware. I am aware! My counsel would have you believe we were not aware of the concentration camps. Not aware. Where were we? Where were we when Hitler began shrieking his hate in Reichstag? Where were we when our neighbors were being dragged out in the middle of the night to Dachau? Where were we when every village in Germany has a railroad terminal where cattle cars were filled with children being carried out to their extermination! Where were we when they cried out in the night to us. Deaf, dumb, blind!
Hans Rolfe: Your Honor, I must protest!
Ernst Janning: My counsel says we were not aware of the extermination of the millions. He would give you the excuse: We were only aware of the extermination of the hundreds. Does that make us any the less guilty? Maybe we didn't know the details. But if we didn't know, it was because we didn't want to know.
Emil Hahn: Traitor! Traitor!
Judge Dan Haywood: Order! Order! Order! Put that man back in his seat and keep him there.
Ernst Janning: I am going to tell them the truth. I am going to tell them the truth if the whole world conspires against it. I am going to tell them the truth about their Ministry of Justice. Werner Lammpe, an old man who cries into his Bible now, an old man who profited by the property expropriation of every man he sent to a concentration camp. Friedrich Hofstetter, the "good German" who knew how to take orders, who sent men before him to be sterilized like so many digits. Emil Hahn, the decayed, corrupt bigot, obsessed by the evil within himself. And Ernst Janning, worse than any of them because he knew what they were, and he went along with them. Ernst Janning: Who made his life excrement, because he walked with them.

We have fallen on happy times, Herr Hahn. In old times it would have made your day if I'd deigned to say good morning to you. Now that we are here in this place together... you feel obliged to tell me what to do with my life... Listen to me, Herr Hahn, there have been terrible things that have happened to me in my life. But the worst thing that has ever happened... is to find myself in the company of men like you.