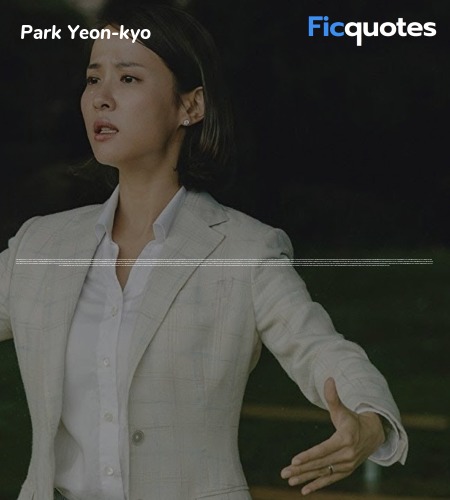 Kim Ki-jung : She may look like a sheep, but inside, she's a fox. Sometimes she acts like she owns the house.
Kim Ki-woo : Right. Of all the people in that house, she's lived there the longest. She was housekeeper to the architect Namgoong, but then she went on to work for this family. When the architect moved out, he introduced this woman to Park's family, telling them, "This is a great housekeeper, you should hire her".
Chung-sook, Ki-taek's wife : So she survived a change of ownership.
Kim Ki-woo : She won't give up such a good job easily.
Kim Ki-jung : To extract a woman like that, we need to prepare well.
Kim Ki-woo : Right, we need a plan.
Park Da-hye : I want to eat peaches. I like peaches best.
Kim Ki-woo : Why not ask for some?
Park Da-hye : No peaches at our house. It's a forbidden fruit.
Kim Ki-woo : So according to what Da-hye told me, she's got a pretty serious allergy to peaches. You know that fuzz on the peach skin? If she's anywhere near it, she gets a full body rash, has trouble breathing, asthma, a total meltdown!
Ki-taek : Anyway. I wasn't trying to eavesdrop, but her words came through clearly! So I couldn't help but...
Kim Ki-woo : Cut, cut! Dad, your emotions are up to here. Bring them down to about there.
Ki-taek : So I couldn't help but overhear...
Kim Ki-woo : Keep it focused!
Ki-taek : What I'm trying to say is... it's just that, your housekeeper's voice is quite loud, you know?
Park Yeon-kyo : I understand, it's all right. Just tell me, okay?
Ki-taek : She said she got diagnosed with active tuberculosis and she was practically shouting over the phone, so upset she could barely control herself!
Park Yeon-kyo : Tuberculosis? Come on...
Ki-taek : It's true, she phoned someone saying she had active TB.
Kim Ki-woo , Park Yeon-kyo : Do people still get TB?
Kim Ki-woo : Dad, back in the day, people used to buy Christmas Seals, right? Feels like a bygone era.
Ki-taek : But I saw it on the internet. Korea has the #1 rate of TB of all the OECD countries.
Kim Ki-woo : But she's still working, as if nothing's wrong - with a kid like Da-song in the house.
Ki-taek : [cut back to Ki-taek and Mrs. Park] So you've got a young kid like Da-song in the house, and a TB patient is doing dishes, cooking, spraying spittle...
Park Yeon-kyo : Stop it, please!