Brother of Thor and son of Odin. Loki is norse god mischief. Later he discovers that he is Laufey's biological son.

Loki is played by Tom Hiddleston in Thor. 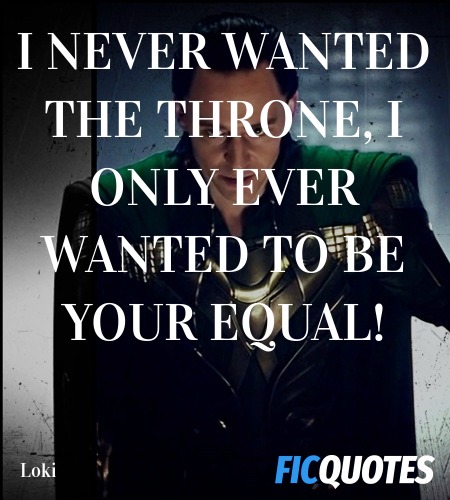 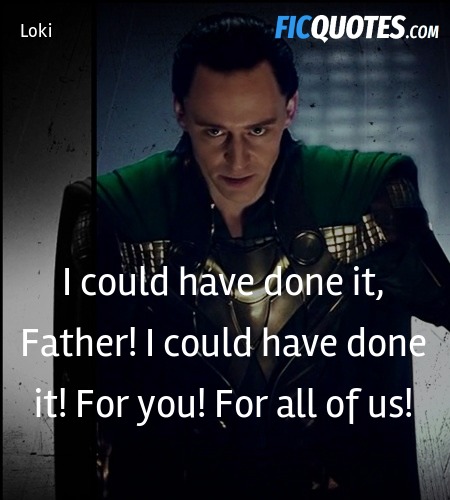 Thor: I will not fight you, brother!
Loki: I'm not your brother! I never was!

Thor: Loki, this is madness!
Loki: Is it madness? Is it? IS IT? I don't know what happened on Earth to make you so soft! Don't tell me it was that woman?... Oh, it was. Well maybe, when we're done here, I'll pay her a visit myself.

Thor: Why have you done this?
Loki: To prove to Father that I am a worthy son! When he wakes, I will have saved his life, I will have destroyed that race of monsters, and I will be true heir to the throne!

Thor: You can't kill an entire race!
Loki: Why not? And what is this new found love for the Frost Giants? You, could have killed them all with your bare hands!
Thor: I've changed.
Loki: So have I. Now fight me!

Thor: Loki. What are you doing here?
Loki: I had to see you.
Thor: What's happened? Tell me, is it Jotunheim? Let me explain to Father...
Loki: Father is dead.
Thor: What?
Loki: Your banishment, the threat of a new war... it was too much for him to bear. You mustn't blame yourself. I know that you loved him. I tried to tell him so, but he wouldn't listen. It was so cruel to put the hammer within your reach knowing that you could never lift it. The burden of the throne has fallen to me now.
Thor: Can I come home?
Loki: The truce with Jotunheim is conditional upon your exile.
Thor: Yes, but... couldn't we find a way?
Loki: And Mother has forbidden your return. This is goodbye, brother. I am so sorry.
Thor: No. I am sorry. Thank you for coming here.
Loki: Farewell.
Thor: Goodbye.
Agent Coulson: Goodbye? I just got back.

Thor: Why don't you tell her? How you sent the Destroyer to kill our friends, to kill me!
Frigga: What?
Loki: Well, I must have been enforcing father's last command.
Thor: You're a talented liar, brother. Always have been.
Loki: It's good to have you back. Now, if you'll excuse me, I have to destroy Jotunheim! 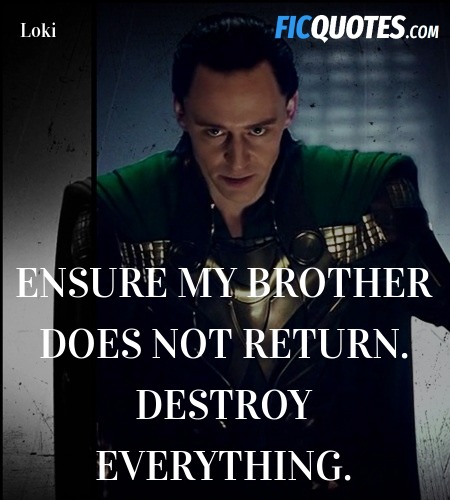 Ensure my brother does not return. Destroy everything.

King Laufey: Kill him.
Loki: After all I've done for you?
King Laufey: ...So you're the one who showed us the way into Asgard.
Loki: That was just a bit of fun, really. To ruin my brother's big day, and to protect the realm from his idiotic rule for a while longer.
King Laufey: I will hear you.
Loki: I will conceal you and a handful of your soldiers, lead you into Odin's chambers, and you can slay him where he lies.
King Laufey: Why not kill him yourself?
Loki: I suspect that the Asgardians would not take kindly to a king who had murdered his predecessor. Once Odin is dead, I will return the Casket to you...
Loki: And you can return Jotunheim to all its, uh... glory.
King Laufey: I... accept.

Heimdall: Tell me, Loki, how did you lead the Jotuns into Asgard?
Loki: Do you think the Bifrost is the only way in and out of this realm? There are passages between worlds to which even you, with all your gifts, are blind. But I have need of them no longer, now that I am king. And I say, for your act of treason, you are relieved of your duties as gatekeeper and no longer citizen of Asgard!
Heimdall: Then I need no longer obey you!

Thor: It's unwise to be in my company right now, brother. Today was to be my day of triumph!
Loki: It'll come, in time. If it's any consolation, I think you're right. About the Frost Giants, about Laufey, about everything. If they were able to slip past Asgard's defenses once, who's to say they won't try again? Next time with an army.

You know, it all makes sense now, why you favored Thor all these years, because no matter how much you claim to love me, you could never have a Frost Giant sitting on the throne of Asgard!

We hope you enjoyed reading our collection of Loki quotes. You can also browse other Thor quotes . If you think we missed any quote from Loki or Thor, please send it to us.