Bane is played by Tom Hardy in The Dark Knight Rises (2012). 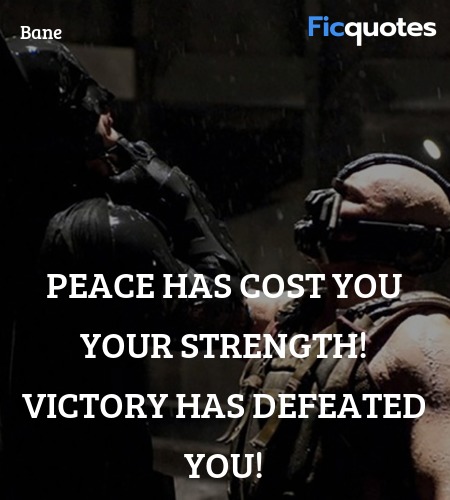 Peace has cost you your strength! Victory has defeated you! 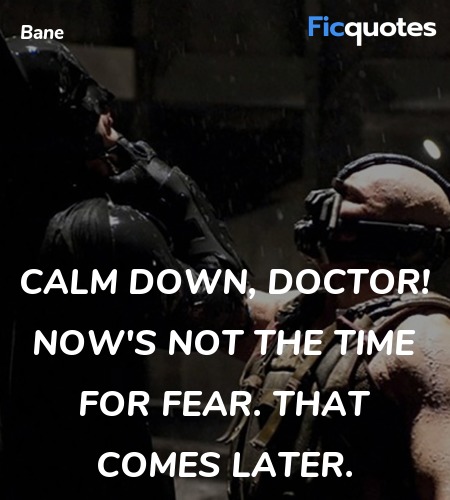 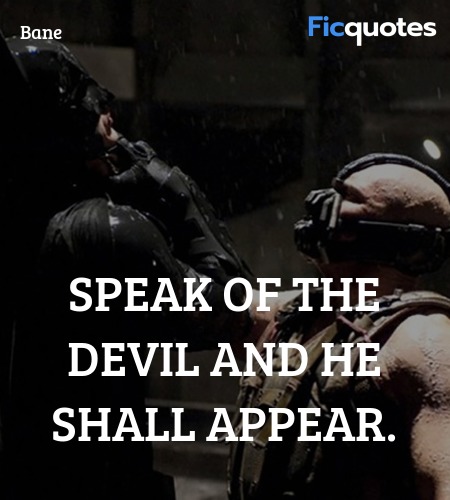 Speak of the devil and he shall appear. 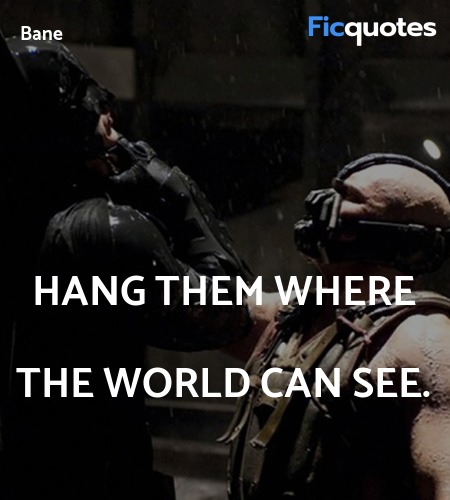 Hang them where the world can see.

CIA Agent : The flight plan I just filed with the agency lists me, my men, Dr. Pavel here but only one of you! First one to talk gets to stay on my aircraft!
CIA Agent : Who paid you to grab Dr. Pavel?
CIA Agent : He didn't fly so good!
CIA Agent : Who wants to try next?
CIA Agent : Tell me about Bane! Why does he wear the mask? A lot of loyalty, for a hired gun!
Bane : Or perhaps he's wondering why someone would shoot a man, before throwing him out of a plane?
CIA Agent : At least you can talk. Who are you?
Bane : It doesn't matter who we are, what matters is our plan.
Bane : No one cared who I was until I put on the mask.
CIA Agent : If I pull that off, would you die?
Bane : It would be extremely painful.
CIA Agent : You're a big guy!
Bane : For you.
CIA Agent : Was getting caught part of your plan?
Bane : Of course... Dr. Pavel refused our offer in favor of yours, we had to find out what he told you.
Dr. Pavel : Nothing! I said nothing!
CIA Agent : Well, congratulations! You got yourself caught! Now what's the next step in your master plan?
Bane : Crashing this plane... with no survivors!

Bane : Behind you is a symbol of oppression. Blackgate Prison, where a thousand men have languished under the name of this man,
Bane : Harvey Dent, who has been held up to you as the shining example of justice!
John Blake : Commissioner, we need to keep you moving until we can get you in front of a camera.
Bane : You have been supplied with a false idol to stop you from tearing down this CORRUPT CITY! Let me tell you the truth about Harvey Dent from the words of Gotham's police commissioner, James Gordon.
Bane : "The Batman didn't murder Harvey Dent, he saved my boy then took the blame for Harvey's appalling crimes so that I could, to my shame, build a lie around this fallen idol. I praised the mad man who tried to murder my own child but I can no longer live with my lie. It is time to trust the people of Gotham with the truth and it is time for me to resign."
Bane : And do you accept this man's resignation? Do you accept the resignation of all these liars? Of all the CORRUPT?
John Blake : Those men locked up for eight years in Blackgate, and denied parole under the Dent Act, based on a lie?
Jim Gordon : Gotham needed a hero...
John Blake : It needs it now more than ever. You betrayed everything you stood for.
Jim Gordon : There's a point, far out there when the structures fail you, and the rules aren't weapons anymore, they're... shackles letting the bad guy get ahead. One day... you may face such a moment of crisis. And in that moment, I hope you have a friend like I did, to plunge their hands into the filth so that you can keep yours clean!
John Blake :Your hands look plenty filthy to me, Commissioner.

We take Gotham from the corrupt! The rich! The oppressors of generations who have kept you down with myths of opportunity, and we give it back to you... the people. Gotham is yours. None shall interfere. Do as you please. Start by storming Blackgate, and freeing the oppressed! Step forward those who would serve. For and army will be raised. The powerful will be ripped from their decadent nests, and cast out into the cold world that we know and endure. Courts will be convened. Spoils will be enjoyed. Blood will be shed. The police will survive, as they learn to serve true justice. This great city... it will endure. Gotham will survive!

We both know that I now have to kill you. You'll just have to imagine the fire!

Trader #1 : This is a stock exchange! There's no money you can steal!
Bane : Really? Then why are you people here?

Captain Jones : I'll die before I talk.
Bane : I'm on your schedule, captain.

Trader #1 : This is a stock exchange. There's no money you can steal.
Bane : Really? Then why are you people here?