Antonius Block is played by Max von Sydow in The Seventh Seal. 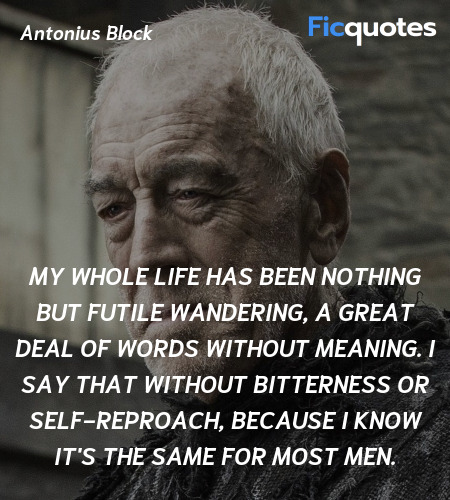 My whole life has been nothing but futile wandering, a great deal of words without meaning. I say that without bitterness or self-reproach, because I know it's the same for most men.

Antonius Block: Wait a moment.
Death: You all say that. But I grant no reprieves. 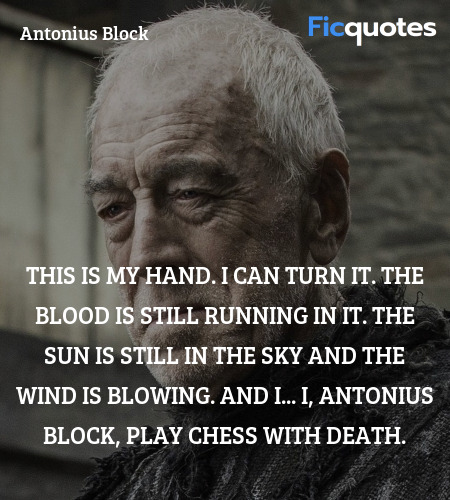 This is my hand. I can turn it. The blood is still running in it. The sun is still in the sky and the wind is blowing. And I... I, Antonius Block, play chess with Death. 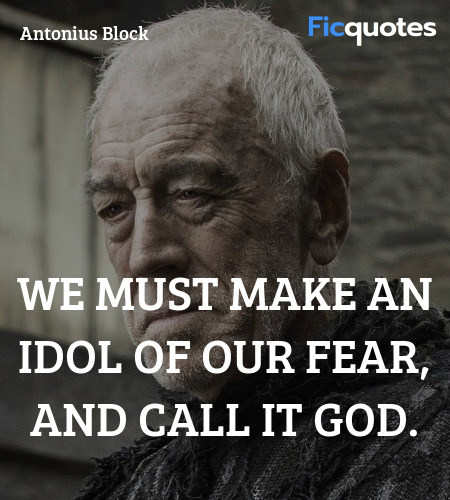 We must make an idol of our fear, and call it god.

You're a traitor - and you tricked me. But we will meet again, and I'll find a way out.

I met Death today. We are playing chess.

Faith is a torment. It is like loving someone who is out there in the darkness but never appears, no matter how loudly you call.

I want to confess as best I can, but my heart is void. The void is a mirror. I see my face and feel loathing and horror. My indifference to men has shut me out. I live now in a world of ghosts, a prisoner in my dreams.

I shall remember this moment: the silence, the twilight, the bowl of strawberries, the bowl of milk. Your faces in the evening light. Mikael asleep, Jof with his lyre. I shall try to remember our talk. I shall carry this memory carefully in my hands as if it were a bowl brimful of fresh milk. It will be a sign to me, and a great sufficiency.

Is it so terribly inconceivable to comprehend God with one's senses? Why does he hide in a cloud of half-promises and unseen miracles? How can we believe in the faithful when we lack faith? What will happen to us who want to believe, but can not? What about those who neither want to nor can believe? Why can't I kill God in me? Why does He live on in me in a humiliating way - despite my wanting to evict Him from my heart? Why is He, despite all, a mocking reality I can't be rid of?

Death: Don't you ever stop asking?
Antonius Block: No. I never stop.
Death: But you're not getting an answer.