Newly recruited Agent 007 famously knows as James Bond takes on Le Chiffre in the 2006 Casino Royale. Daniel Craig's first outing as the Super Sleuth with a License to kill and Martin Campbell's last endeavor as the Director of Bond movies, Casino Royale was well received by fans and critics alike. Enjoy the action-packed and witty Casino Royale quotes here. 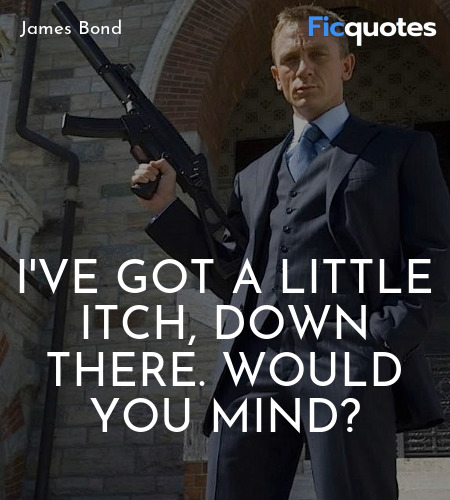 I've got a little itch, down there. Would you mind? 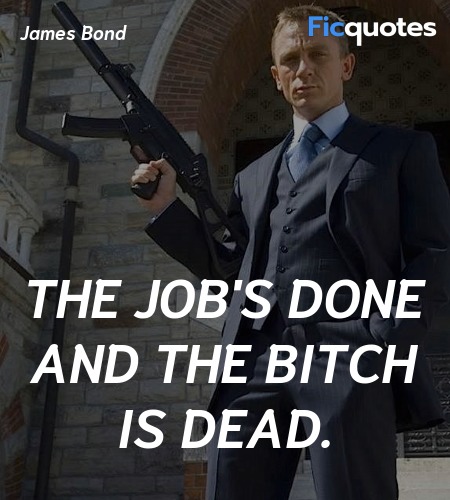 The job's done and the bitch is dead. 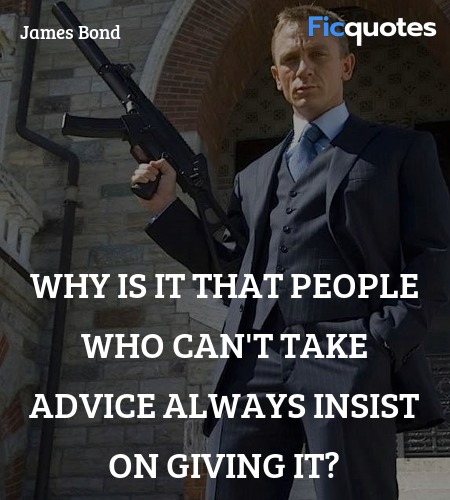 Why is it that people who can't take advice always insist on giving it? 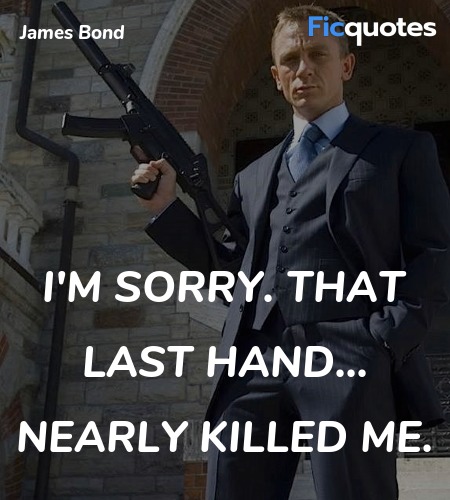 You are a funny man, Mr. Bond.

Steven Obanno : Do you believe in God, Mr. Le Chiffre?
Le Chiffre : No. I believe in a reasonable rate of return.

Give our guests five minutes to leave... or throw them overboard.

Who the hell do they think they are? I report to the Prime Minister and even he's smart enough not to ask me what we do. Have you ever seen such a bunch of self-righteous, ass-covering prigs? They don't care what we do; they care what we get photographed doing. And how the hell could Bond be so stupid? I give him 00 status and he celebrates by shooting up an embassy. Is the man deranged? And where the hell is he? In the old days if an agent did something that embarrassing he'd have a good sense to defect. Christ, I miss the Cold War.

Sometimes we pay so much attention to our enemies, we forget to watch our friends as well.

Villiers : He's in the Bahamas.
M : You woke me to share his holiday plans?

M : Who's he looking at?
Villiers : Alex Dimitrios.
M : That slimy bugger.

Which would explain how he could set up a high stakes poker game at Casino Royale in Montenegro: ten players, ten million dollar buy in, five million dollar rebuy, winner takes all, potentially a hundred and fifty million dollars.

We can't let him win this game. If he loses, he'll have nowhere to run - we'll give him sanctuary in return for everything he knows. I'm putting you in the game: replacing someone who's playing for the syndicate. According to Villiers, you're the best player in the service. Trust me, I wish it wasn't the case.

When they analyzed the stock market after 9/11, the CIA discovered a massive shorting of airline stocks. When the stocks hit bottom on 9/12, somebody made a fortune. The same thing happened this morning with SkyFleet stock, or was supposed to. With their prototype destroyed, the company would be near bankruptcy. Instead, somebody lost over $100 million betting the wrong way.

She knew you were you.

I have to know I can trust you and that you know who to trust. And since I don't know that, I need you out of my sight.

Quite the body count you're stacking up.

James Bond : Vodka-martini.
Bartender : Shaken or stirred?
James Bond : Do I look like I give a damn?

Solange : Apparently, he's on the last flight to Miami. So, you have all night to question me.
James Bond : In that case, we're gonna need - some more champagne.

I always thought M was a randomly assigned initial, I had no idea it stood for...

I love you too M.

Oh, and the valet ticket.

Solange : Mmmmm. You like married women... don't you, James?
James Bond : It keeps things simple.
Solange : What is it about bad men? You... my husband. I had so many chances to be happy, so many nice guys. Why can't nice guys be more like you?
James Bond : Because then they'd be bad.
Solange : Mmmmm, yes!... But, so much more interesting.

Do you want a clean kill or do you want to send a message?

Vesper? I do hope you gave your parents hell for that.

Le Chiffre : Weeping blood comes merely from a derangement of the tear duct, my dear General. Nothing sinister.
Le Chiffre : All in. I have two pair and you have a 17.4% chance of making your straight.

Good evening. Can I get a bottle of chilled Bollinger Grande Année and the Beluga caviar?

He won the hand with the river card. The odds against are twenty-three to one, and he'd know that. When he made his first raise, he had nothing. Winning was blind luck.

Ten million was wired to your account in Montenegro, with the contingency for five more if I deem it a prudent investment. I suppose you've given some thought to the notion that if you lose, our government will have directly financed terrorism.

This is me in character pissed off because you're losing so damn hard we won't be here past midnight. Oddly enough, my character's feelings mirror my own.

Le Chiffre : You know, I never understood all these elaborate tortures. It's the simplest thing... to cause more pain than a man can possibly endure.
Le Chiffre : And of course, it's not only the immediate agony, but the knowledge... that if you do not yield soon enough... there will be little left to identify you as a man.
Le Chiffre : The only question remains: will you yield, in time?

Wow. You've taken good care of your body. Such... a waste.