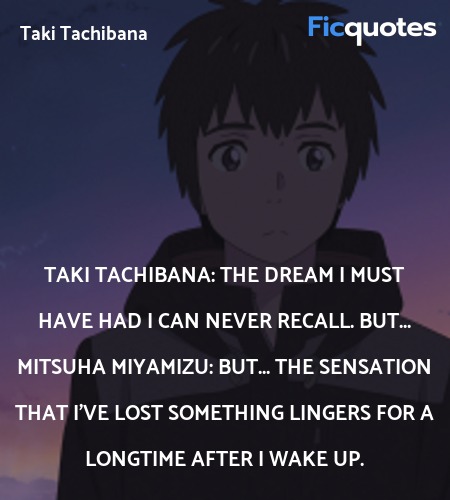 Taki Tachibana: The dream I must have had I can never recall. But...
Mitsuha Miyamizu: But... the sensation that I've lost something lingers for a longtime after I wake up.

What should I do? Would I annoy him? Would it be awkward? Or maybe he'd be a bit glad to see me? 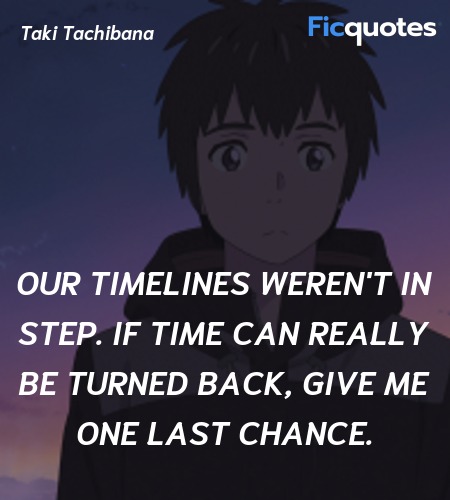 Our timelines weren't in step. If time can really be turned back, give me one last chance. 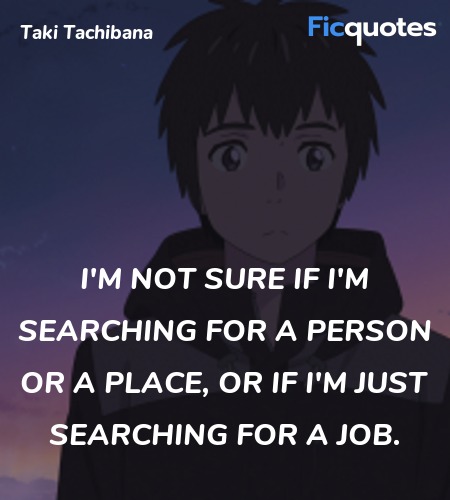 "I wanted to go on this date, but if it so happens that you end up going, you better enjoy it!"

Why do guys associate cutting hair with breakups?

"However, I'm sure you've never gone out on a date before, so below are some links to help you out, you late bloomer."

"By the time the date is over, the comet will be visible in the sky."

we both have it rough, don't we?

He's so lucky. They must be together around now.

that time 3 years ago before I got to know you...

If nothing is done, everyone will die tonight!

Mitsuha Miyamizu: You two get along so well.
Sayaka Natori , Katsuhiko Teshigawara: We do not!

Mitsuha Miyamizu: It's too small and close-knit. I want to graduate and go to Tokyo.
Sayaka Natori: I don't blame you. There's really nothing in this town.

That time 3 years ago, you came to see me!

I shouldn't for her sake.

Once in a while when I wake up. I find myself crying.

Nah... I have to use the bathroom.


Taki Tachibana: What a realistic dream if I say so myself...
Taki Tachibana: Oh, he keeps a diary. He's so organized. Wish I lived in Tokyo too. Oh! That's her. A crush, maybe?

I'll tell her about the disastrous date the next time we switch, I thought. But for some reason, after that, Mitsuha and I never switched places again.