Truman Burbank is played by Jim Carrey in The Truman Show. 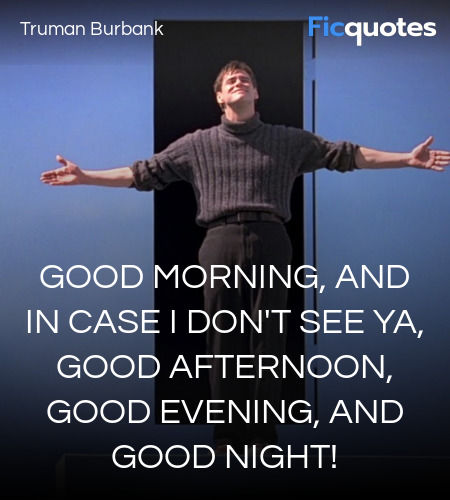 Good morning, and in case I don't see ya, good afternoon, good evening, and good night! 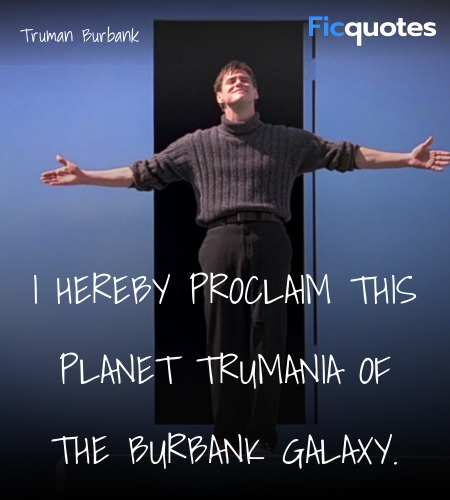 I hereby proclaim this planet Trumania of the Burbank Galaxy. 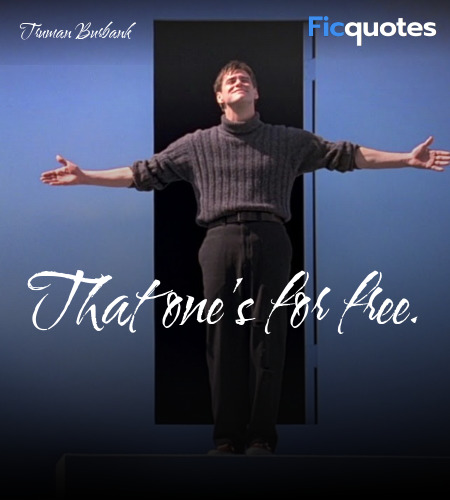 That one's for free. 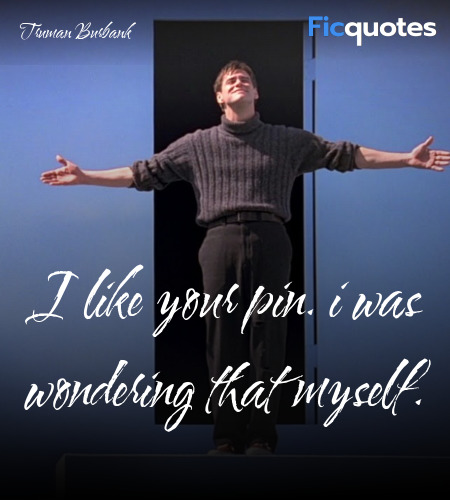 I like your pin. I was wondering that myself.

The early bird gathers no moss! The rolling stone catches the worm!

Can you tell her I had to go to Fiji and that I'll call her when I get there?

Mike Michaelson: The Hague for Christof. Hello? The Hague? All right, we've lost that call, let's go to Hollywood, California. You're on Trutalk.
Sylvia: Hi, Christof, I'd just like to say one thing, you're a liar and a manipulator and what you've done to Truman is sick!
Christof: Well. We remember this voice, don't we? How could we forget?
Mike Michaelson: Uh, let's go to another call, what do we have...
Christof: No. No, no, no, no, no, it's fine, it's fine, Mike. I love to reminisce with former members of the cast. Sylvia, as you announced so melodramatically to the world, do you think because you batted your eyes at Truman once, flirted with him, stole a few minutes of airtime with him to thrust yourself and your politics into the limelight, that you know him? That you know what's right for him? You really think you're in a position to judge him?
Sylvia: What right do you have to take a baby and turn his life into some kind of mockery? Don't you ever feel guilty?
Christof: I have given Truman the chance to lead a normal life. The world, the place you live in, is the sick place. Seahaven is the way the world should be.
Sylvia: He's not a performer, he's a prisoner. Look at him, look at what you've done to him!
Christof: He could leave at any time. If his was more than just a vague ambition, if he was absolutely determined to discover the truth, there's no way we could prevent him. I think what distresses you, really, caller, is that ultimately Truman prefers his cell, as you call it.
Sylvia: Well, that's where you're wrong. You're so wrong! And he'll prove you wrong!