Transformers: Dark of the Moon (2011) Quotes

Transformers: Dark of the Moon (2011) Quotes 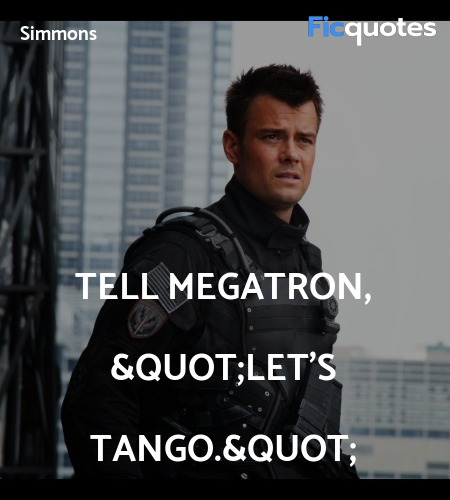 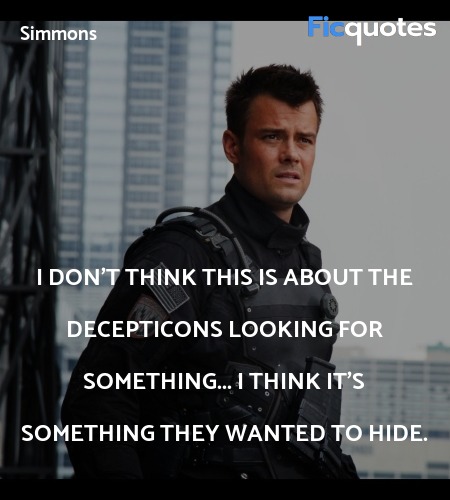 I don't think this is about the Decepticons looking for something... I think it's something they wanted to hide. 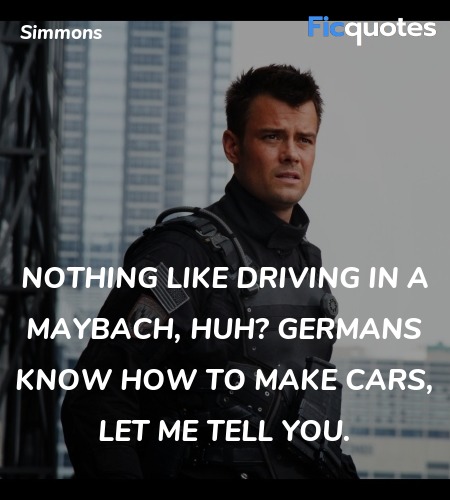 Nothing like driving in a Maybach, huh? Germans know how to make cars, let me tell you. 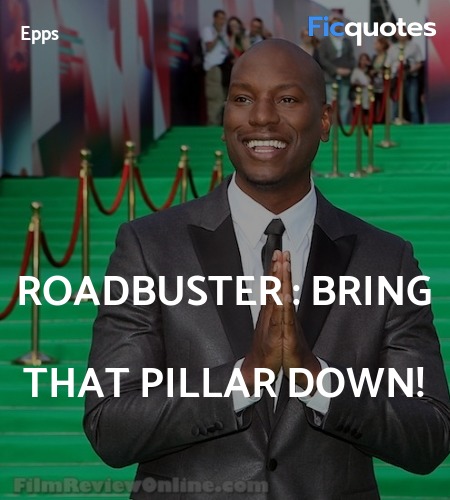 Roadbuster : Bring that pillar down!

Megatron : Cybertron... you are saved, at last.
Megatron : Oh, have you come to surrender?
Carly Miller : Was it all worth it?
Megatron : Obviously!
Carly Miller : All your work to bring Sentinel back, and now clearly he has all the power! It's actually almost tragic!
Megatron : YOU DARE LECTURE ME, SLAVE?
Carly Miller : Your Decepticons finally conquering this planet, and yet their leader won't be you!
Megatron : It will be me! It will always be me!
Carly Miller : In any minute now you'll be nothing but Sentinel's bitch!

That is one scary ass Decepticon!

Snipers, take out their eyes.

Robert Epps : Where are Sam and Carly?
Eddie : Um...
Robert Epps : I give you one thing to do, one thing to do, and you drop the ball on that?
Eddie : I ain't signed up for all this! Got aliens blasting at me, running around, chasing me! I'm ducking through churches and buildings and all that kind of crap! This is bullshit! I ain't signed up for this, Epps. I'm trying to keep it together.

Simmons : We've go to beak this case down. What we have here, is an astronaut epidemic.
Simmons : MIA, dead, died in a car accident, killed, DOA, car death... it's like these guys can't drive, they can fly into outer space but they can't drive a car.

Lennox : What the hell was that thing?
Optimus Prime : That is Shockwave.

Charlotte Mearing : CIA's up my ass about this mystery raid in the Middle East. So it's time to come clean. Was your unit involved?
Lennox : Uh, I'm not sure ma'am.
Charlotte Mearing : As director of National Intelligence, I'm a really big fan of intelligent answers.
Lennox : I really can't tell you definitively. These Autobots are like teenage kids, they like to sneak out of the house every once in a while.

Listen up! You wanna hit back? We're gonna have to wingsuit in. It's the only way to get close. I can't promise anyone a ride home, but if you're with me, the world needs you now.

Lennox : That's the Matrix of Leadership, the only thing in the Universe that can repower a Transformer's spark.
Optimus Prime : Let us begin... Sentinel Prime, we bid you return.
Lennox : Hold your fire!
Optimus Prime : Stop! Sentinel, it is I, Optimus Prime!
Ironhide : You are home, Sentinel.
Ratchet : There is nothing to fear.

Lennox : Why was he after this?
Optimus Prime : It's impossible... This is an engine part, from a long lost Autobot ship.

Que : Ah, good, you're here. My name's Que. I do hope you have answers for him. I've never seen him so upset!
Lennox : Optimus, you remember Charlotte Mearing, our director of National Intelligence?
Dino : He's in a bad mood. He's not talking to anybody today.
Charlotte Mearing : What is this, the silent treatment?
Ironhide : We've seen that and this is not that.
Que : Definitely not!
Ironhide : This is worse. Prime, make something of yourself!
Ironhide : He's pissed.
Optimus Prime : You lied to us! Everything humans know of our planet we were told had all been shared!
Optimus Prime : So why was this found in human possession?

: Years from now they're going to ask us: where were you when they took over the planet? We're gonna say: we stood by and watched.

Simmons : Excuse me, excuse me, It doesn't make sense! Can't we get any eyes in there at all?
Charlotte Mearing : They keep shooting down our drones.
General Morshower : They want us blind. But we do have a couple of mini-drones we're going to try.
Simmons : Well, whoever's manning these UAV drones, can we try to redirect them toward Trump Tower? The kid, Witwicky, was on his way to Chicago. Said some point man, human op is there, for the Decepticons! Listen, if I know anything I know this: that kid is an alien bad news magnet!

Simmons : [about Carly] She lives here? Wow!
Simmons : You had your chance to frisk her.
Dutch : I have a girlfriend.
Simmons : Really, what's her name?
Dutch : India...

Robert Epps : This evil thing's looking at me!
Shockwave : Driller Bot is thirsty.

Robert Epps : And it even got an uglier Decepticon with it!
Shockwave : Commence.

The Autobots are off saving the world and I've organized four binders.

Optimus Prime : [shoots down the ship attacking Sam and Epps] We will kill them all! Your leaders will now understand: Decepticons will never leave your planet alone. And we needed them to believe we had gone. For today, in the name of freedom, we take the battle to them!
Sam Witwicky : I saw your ship blow up!
Roadbuster : The ship? We were never in the ship! We designed the damn thing, didn't we?
Leadfoot : We were hidden in the first booster rocket to seperate - splashed down back in the Atlantic, just as planned.
Leadfoot : We ain't going nowhere!
Brains : Yeah, no one's exiling us!
Wheelie : The Autobots are staying right here. We're gonna help you win this war!

Sam Witwicky : We got an emergency, you gotta get Colonel Lennox out here. I'm reporting Decepticons! Decepticons are back, you gotta open that gate right now!
NEST Guard : Easy sir, this is Heath and Human services.
Sam Witwicky : Right, packing M4s! What are you protecting? Colostomy bags? Bedpans? Throat lozenges? Where'd you get that hat from, nursing school? So you're nurses and foot powder protectors, fantastic!

Charlotte Mearing : Mr. Witwicky, I thought I made it clear to you that I did not want you calling this phone...
Sam Witwicky : Listen, the whole thing has been a set-up since the beginning! The Decepticons wanted Optimus to find Sentinel because he was the only one who could revive him.
Charlotte Mearing : But we have the space bridge...
Sam Witwicky : Mearing, you have five pillars - I just learned that they have hundreds! You're doing exactly what they wanted you to do! What do you need me to say to you? The Decepticons are coming for Sentinel Prime!

You're gonna be fine, I promise...

Humans are working with the Decepticons.

Wheelie : You know, Sam, I don't know about moving in with this chick. What if she dumps us like the last girl?
Brains : She was mean, didn't like her.
Wheelie : Us guys gotta stick together!
Brains : We are family! fa-fa-mi-mi-family.
Sam Witwicky : No, we are not family! You're a political refugee, and I have finally found someone who appreciates me for me!
Brains : Well, you tell her that we're not your pets, and we're not your toys, all right? We're an advanced genius alien race just looking for a home!

Sam Witwicky : Where is she? WHERE IS SHE?
Dylan : You've got some balls.

Bee, there's something else going on here. The moon programme, the cover-ups, the assassinations, it's all led to this...

I've saved your life twice. I can't tell you how, but you are still alive because of me.

Chicago is Ground Zero, do you understand?

Carly Miller : Do you want this to happen?
Dylan : I want to survive, I want forty more years! You think I asked for this? I inherited a client!
Carly Miller : Yeah? Well, when Cybertron's here and we're all enslaved, I guess they'll still need a human leader!
Dylan : Don't jinx me! You want to survive, you listen to me!

Carly Miller : I guess they didn't tell you about this part, did they?
Dylan : You think I'm at every meeting?... Look, I'm safe. They said I'm safe.

Carly Miller : They said... they were shipping resources, to rebuild their planet.
Dylan : Yes. But they need one resource in particular, one native to our planet.
Carly Miller : ...Us?
Dylan : You're very smart. You see, they can't rebuild without a slave labour force. How many rocks out there offer six billion workers?
Carly Miller : What are you talking about? We can't transport people!
Dylan : They're not shipping people. They're shipping their planet here!

Brains : Wow!
Brains : Get lucky!
Carly Miller : Get him out of here!
Brains : Wait. No, no, no, no!
Carly Miller : Oh, he's gross!
Brains : She's good.
Sam Witwicky : Sorry. They're stranded here. Somebody's got to watch out for them.
Carly Miller : Yesterday, that one was in my underwear drawer.
Brains : Did research! Looking real good too! Ha-ha-ha...
Brains : Ow! No need to hit me!