Tomi Hirayama is played by Chieko Higashiyama in Tokyo Story. 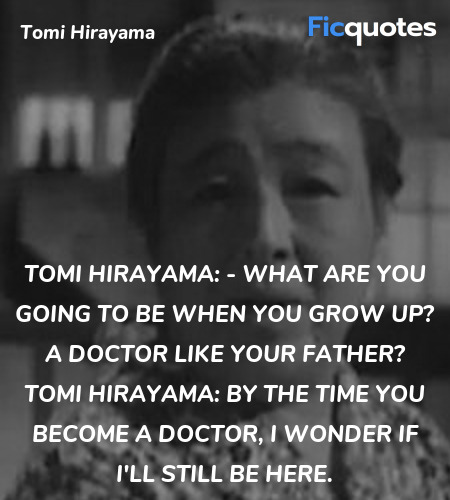 Tomi Hirayama: - What are you going to be when you grow up? A doctor like your father?
Tomi Hirayama: By the time you become a doctor, I wonder if I'll still be here.

Kyoko, did mother still have her summer sash? I'd like it for a keepsake. Is that alright with you? And that linen kimono she used to wear in summer? I want that too. You know where it is? Can you get it out?

Shige Kaneko: Why, you're back so soon. You should have stayed longer!
Tomi Hirayama: We're home.
Hair salon customer: Who are they?
Shige Kaneko: Oh, just friends from the country.

Tomi Hirayama: You were so nice to us, children. Now that we've seen you all, you need not come down, even if anything should happen to either one of us.
Shige Kaneko: Don't talk like that. This isn't a farewell.
Tomi Hirayama: I mean it. We live too far away.