The Wolf of Wall Street Quotes

The Wolf of Wall Street

The Wolf of Wall Street Quotes 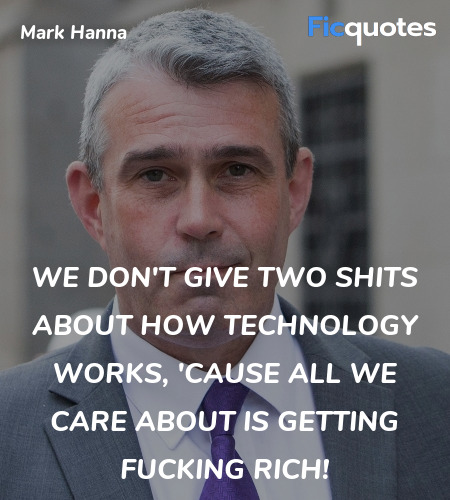 We don't give two shits about how technology works, 'cause all we care about is getting fucking RICH! 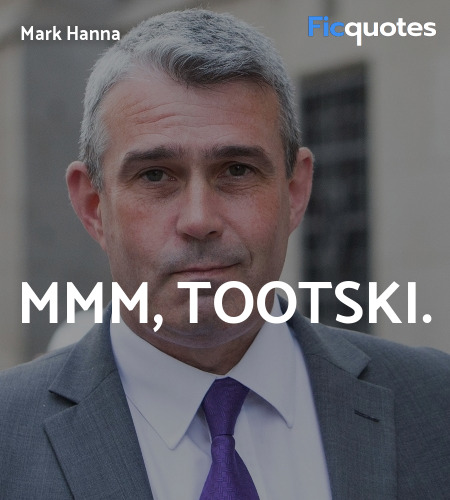 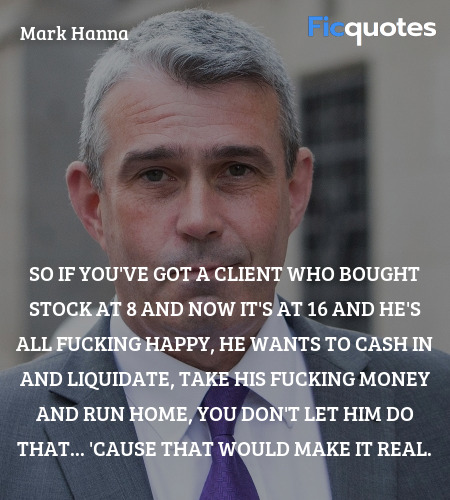 So if you've got a client who bought stock at 8 and now it's at 16 and he's all fucking happy, he wants to cash in and liquidate, take his fucking money and run home, you don't let him do that... 'cause that would make it real. 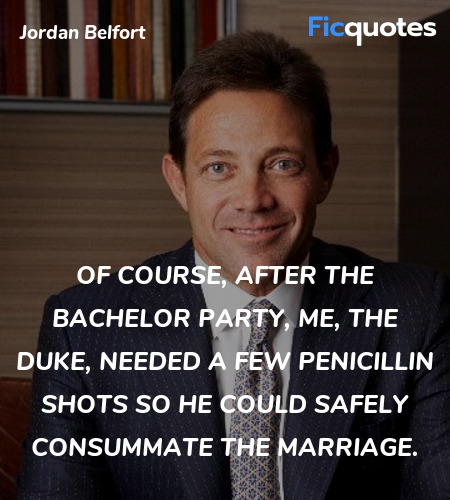 Of course, after the bachelor party, me, the Duke, needed a few penicillin shots so he could safely consummate the marriage.

Her pussy was like heroin to me. And it wasn't just about the sex either. Naomi and I got along. I mean, we had similar interests and shit.

This is the greatest company in the world!

You be ferocious! You be relentless! You be telephone fucking terrorists! Now let's knock this motherfucker out of the park!

How do you say rathole in British?

Jordan Belfort: Oh my God! You had to deal with the Golf Course people too! What a greek tragedy! Honey oh my God!, you probably had to pay them in cash with your hands! What a fucking burden, and actually had to do some work besides swiping my fucking credit card all day? Huh? Cause I can't keep track of your professions honey! Last month you were a wine connoisseur, and now you're an aspiring landscape architect, Isn't that right?
Naomi Lapaglia: Fuck you!
Jordan Belfort: Don't you dare throw that fucking water on me! Don't you fucking dare!

You wanna know what money sounds like? Go to a trading floor on Wall street. "Fuck this, shit that. Cunt, cock, asshole." I couldn't believe how these guys talked to each other! I was hooked in seconds. It was like mainlining adrenaline.

She designs women's panties too? Oh, my God!

Money doesn't just buy you a better life - better food, better cars, better pussy - it also makes you a better person. You can give generously to the church or political party of your choice. You can save the fucking spotted owl with money.

And if anyone here thinks I'm superficial or materialistic, go get a job at fucking McDonald's, 'cause that's where you fucking belong!

It was a madhouse, a greed fest, with equal parts cocaine, testosterone, and body fluids. It got so bad, I had to declare the office a fuck-free zone between the hours of 9 and 7.

I fucked her brains out... for eleven seconds.

You know, every time someone rises up in this world, there's always gonna be some asshole trying to drag 'em down.

What we're gonna do is this: first we pitch 'em Disney, AT&T, IBM, blue chip stocks exclusive. Companies these people know. Once we sucker them in, we unload the dog shit.

This is our golden ticket to the fuckin' Chocolate Factory, right here. And I wanna meet Willy fuckin' Wonka, okay? I wanna be with the fuckin' Oompa Loompas!

I'm not ashamed to admit it. When we arrived to prison, I was absolutely terrified. But I needn't have been. See, for a brief fleeting moment, I'd forgotten I was rich and I lived in a place where everything was for sale. Wouldn't you like to learn how to sell it?

It turned out the British weren't too different from the Swiss. Money talks and bullshit takes the bus.

Gentlemen, welcome to Stratton Oakmont. You snooks will now be targeting the wealthiest 1% of Americans. We're talking about whales here, Moby fucking Dicks. And with this script, which is your new harpoon, I'm gonna teach each and every one of you to be Captain fucking Ahab.

Actually, the madness started on our very first day, when one of our brokers, Ben Jenner, christened the elevator by getting a blow job from the sales assistant. Her name was Pam and to her credit, she did have this amazing technique with this wild twisting jerk motion. About a month later, Donnie and I decided to double team her on a Saturday afternoon while our wives were out shopping for Christmas presents. Eventually Ben married her, which was pretty amazing, considering she blew every single guy in the office. Well, he got depressed and killed himself about three years later.

Max Belfort: Jordy, one of these days the chickens are gonna come home to roost.
Jordan Belfort: You're lookin' at me like I'm crazy.
Max Belfort: Crazy? This is obscene!
Jordan Belfort: It was obscene, in the normal world. I mean, who the fuck wanted to live there?

Second key to success in this racket is this little baby right here. It's called cocaine. It'll keep you sharp between the ears. It'll also help your fingers dial faster. And guess what? That's good for me.

The nice thing about being rescued by Italians is that they feed you, make you drink red wine, then you get to dance.

My name is Jordan Belfort. I'm a former member of the middle class raised by two accountants in a tiny apartment in Bayside, Queens. The year I turned 26, as the head of my own brokerage firm, I made $49 million, which really pissed me off because it was three shy of a million a week.

Jordan Belfort: On a daily basis I consume enough drugs to sedate Manhattan, Long Island, and Queens for a month. I take Quaaludes 10-15 times a day for my "back pain", Adderall to stay focused, Xanax to take the edge off, pot to mellow me out, cocaine to wake me back up again, and morphine... Well, because it's awesome. But of all the drugs under God's blue heaven, here is one that is my absolute favourite. See, enough of this shit will make you invincible - able to concur the world. And eviscerate your enemies.
Jordan Belfort: And I'm not talking about this... I'm talking about this.

Sell me this pen!

I am not gonna die sober!
Jordan Belfort: An I.P.O. is an initial public offering. It's the first time a stock is offered for sale to the general population. Now as the firm taking the company public, we set the initial sales price then sold those shares right back to our friends. Yet...
Jordan Belfort: Look, I know you're not following what I'm saying anyway, right? That's... that's okay, that doesn't matter. The real question is this: was all this legal? Absolutely fucking not. But we were making more money than we knew what do with.

The only thing standing between you and your goal is the bullshit story you keep telling yourself as to why you can't achieve it.

My wife, Naomi, the Duchess of Bay Ridge, Brooklyn. A former model and Miller Lite girl. Yeah. She was the one with my cock in her mouth in the Ferrari, so put your dick back in your pants.

Jordan Belfort: This right here is the land of opportunity. This is America. This is my home! The show goes on!
Jordan Belfort: They're gonna need to send in the National Guard to take me out, cos I ain't going nowhere!

See those little black boxes? They're called telephones. I'm gonna let you in on a little secret about these telephones. They're not gonna dial themselves. Okay? Without you, they're just worthless hunks of plastic. Like a loaded M16 without a trained marine to pull the trigger.

The book, motherfucker, the book!

I'm not ashamed to admit it: my first time in prison, I was terrified. For a moment, I had forgotten I lived in a world where everything was for sale. Wouldn't you like to know how to sell it?

But before you depart this room full of winners, I want you to take a good look at the person next to you. Go on. Because sometime in the not-so-distant future, you're gonna be pulling up at a red light, in your beat-up old fucking Pinto, and that person's gonna be pulling up right alongside you in their brand new Porsche. With their beautiful wife by their side, who's got big voluptuous tits. And who're you gonna be sitting next to? Some disgusting wildebeest with three days of razor-stubble, in a sleeveless muumuu, crammed in next to you in a carload full of groceries from the fucking Price Club. That's who you're gonna be sitting next to!

I'm sober for two years, stopped my drugs, settled down with my wife and kids, and then this happens! Rugrat gets busted down in Miami, and guess who happens to be with him? Saurel! That's right, out of all the Swiss bankers in Miami, it had to be him! Even more fucked, is that he got busted for shit that had nothing to do with me. It had nothing to fucking do with me! Some stuff about running drugs with Rocky Aoki, you know, the founder of Benihana? Benihana... Beni-fucking-hana? BENI-FUCKING-HANA? WHY? WHY, GOD? Why would You be so cruel as to use the king of Japanese restaurants to take me down?

Look, I knew these guys weren't like Harvard MBAs. Robbie Feinberg, the Pinhead, took five years to finish high school. Alden Kupferberg, the Sea Otter, didn't even graduate. Chester Ming, the depraved China man, thought jujitsu was in Israel. Smartest of the bunch was Nicky Koskoff. He actually went to law school. I called him Rugrat because of his piece of shit hairpiece. Still, give them to me young, hungry, and stupid, and in no time, I'll make 'em rich.

And in the case of the telephone, it's up to each and every one of you, my highly-trained Strattonites. My killers, my killers who will not take no for an answer. My fucking warriors, who will not hang up the phone until their client either buys or fucking dies!

So I was sellin' them shit, but the way I looked at it, the money was better off in my pocket.

FYI boys, Danielle has promised to use this $10,000 for breast implants. She's already got C-cups, but now she wants FUCKIN' DOUBLE D'S!

Let me tell you something. There's no nobility in poverty. I have been a rich man and I have been a poor man. And I choose rich every fuckin' time. Because, at least as a rich man, when I have to face my problems, I show up in the back of the limo, wearing a $2000 suit and a $40,000 gold fuckin' watch.

It wasn't even a choice.

25 grand to the first cocksucker to nail the bulls-eye!