Best The Fast and the Furious (2001) Movie Quotes

Hector is going to be running 3 Honda Civics with spoon engines. And on top of that he just came into Harry's and he ordered 3 T66 turbos, with NOS, and a Motec system exhaust.

I used to drag here back in high school. That railroad crossing up there is exactly a quarter-mile away from here. On green, I'm going for it.

What did you put in that sandwich? 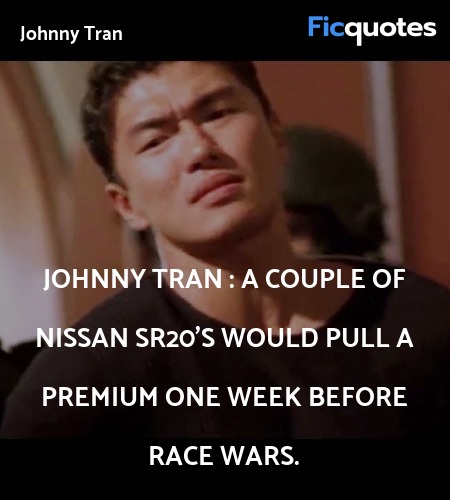 Johnny Tran : A couple of Nissan SR20's would pull a premium one week before race wars. 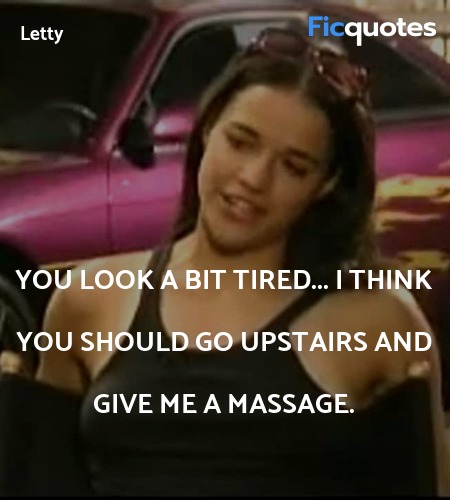 You look a bit tired... I think you should go upstairs and give me a massage. 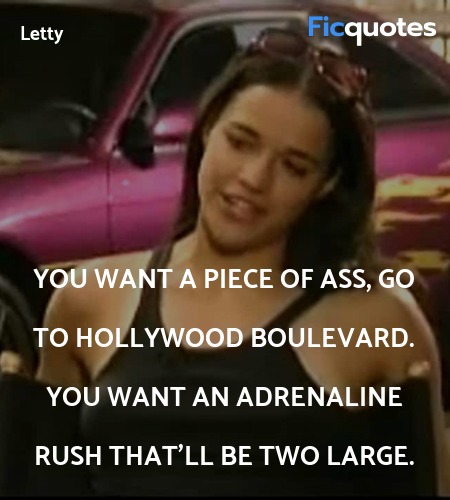 You want a piece of ass, go to Hollywood Boulevard. You want an adrenaline rush that'll be two large.

Dom : This you're beer?
Vince : Yeah that's my beer... Yo Dom! Why'd you bring the busta here?
Dom : Because the busta kept me out of handcuffs, he didn't just run back to the fort, the buster brought me back 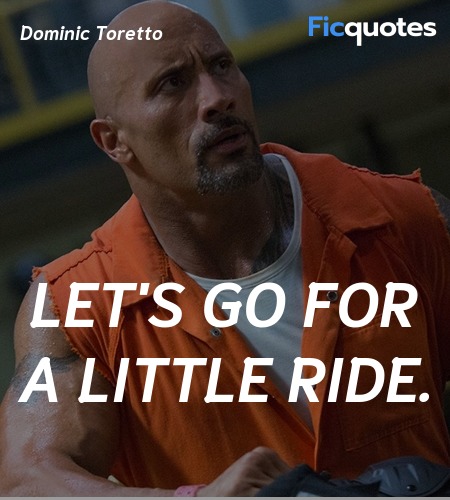 Let's go for a little ride.

You break her heart, I'll break your neck.

Vince : Why don't you try Fat Burger from now on? You can get yourself a cheese and fries for 2.95, faggot!
Brian : I like the tuna here.
Vince : Bullshit asshole, no one likes the tuna here!
Brian : Yeah well I do.

Brian : Nice crib, sarge. It's a lot better than that last place you confiscated.
Sgt. Tanner : Eddie Fisher built it for Elizabeth Taylor back in the fifties.
Brian : See? Even the cops in Hollywood are Hollywood.

Letty : I smell...
Letty : skanks. Why don't you girls just pack it up before I leave tread marks on your face?

I saw Linder about a week later. I had the wrench in my hand... and I hit him! And I didn't mean to keep hitting him, but by the time I was done, I couldn't lift my arm. He's a janitor at an elementary school. He has to take the bus to work... and they banned me from the tracks for life.

Hector : Wait, hold up, hold up. Look at this snowman right here, man.
Hector : Sweet ride! Whatcha runnin' under there, man?
Hector : You're gonna make me find out the hard way?
Brian : Hell yeah!
Hector : You're brave! You're brave! They call me Hector. Gotta last name too, but I can't pronounce it
Brian : Brian Spilner.
Hector : Typical white boy name, know what I mean?

Mia : You know, my brother likes you. Usually he doesn't like anybody.
Brian : Yeah, he's a complicated guy.

Mia : Letty grew up just down the street. She was into cars since she was like ten years old. Dom always had her attention. Then she turned sixteen...
Brian : And she had Dom's attention.
Mia : Yeah, it's funny how that works out.

Brian : You know, I was thinking we should go out sometime.
Mia : Oh, that's sweet, but I usually don't date my brother's friends.
Brian : Well, that sucks. I guess I'll have to kick his ass then.
Mia : I'd love to see that. Actually, I'd pay to see that.

Mia : Tuna on white. No crust, right?
Brian : I don't know. How is it?
Mia : Every day for the last three weeks you've been coming in here and you've been asking me how the tuna is. Now, it was crappy yesterday, it was crappy the day before and guess what? It hasn't changed.
Brian : I'll have the tuna.
Mia : No crust?
Brian : No crust.

Brian : I just need some more time.
FBI Officer : If you want time, buy the magazine!

Not a bad way way to spend ten grand.

Agent Bilkins : DVD players were purchased legally. All we've got on Tran and his boys are some low-rent weapons charges and some outstanding speeding tickets.
Sgt. Tanner : So, they're out.
Agent Bilkins : Father bailed them out. Is this the kind of intelligence I can except from you, O'Connor?
Brian : What, you're gonna pin this on me?
Agent Bilkins : Hey, I can pin this on whoever I want to. Perks of the job.

That's not what I had in mind.

Take it upstairs Einstien! You can't detail a car with the cover on. Can't even get that right.

You can have any brew you want... as long as it's a Corona.

Jesse : These are the additions, this is the basic layout of the car, and this is what it could look like when it's done. Red, green, whatever.
Brian : Hey man, you should be going to MIT or something.
Jesse : No man, I got that attention disorder.
Brian : Oh, A.D.D.?
Jesse : Yes, that shit.

That's my dad. He was coming up in the pro-stock circuit. Last race of the season, he was coming into the final turn when a driver named Kenny Linder tapped his bumper and put him into the wall at a hundred and twenty miles an hour. I watched my father burn to death. I can still remember him screaming. The people who were there said my father died long before the tanks blew. They said it was me that was screaming.

Dom : You almost had me? You never had me - you never had your car... Granny shiftin' not double clutchin' like you should. You're lucky that hundred shot of NOS didn't blow the welds on the intake! You almost had me?
Extra : You Tell him Dominic. Get out of here
Dom : Now, me and the mad scientist got to rip apart the block... and replace the piston rings you fried.
Dom : Ask any racer. Any real racer. It don't matter if you win by an inch or a mile. Winning's winning.

I live my life a quarter mile at a time. Nothing else matters: not the mortgage, not the store, not my team and all their bullshit. For those ten seconds or less, I'm free.

Brian : Hey, what's up, Jesse? What do you have in your hand?
Jesse : Throwing down the pinkslip just like you.
Brian : Pinkslip for what? The Jetta?
Jesse : Yeah.
Brian : You can't bet your dad's car.
Jesse : It's all right. I ain't losin'. This fool is running a Honda 2000. I'll win. Then me and my dad can roll together when he gets out of prison. It's all good.
Brian : Well, they're gonna throw him right back in prison after he kills you.

Sgt. Tanner : Are you going native on me, Brian?
Muse : I think the sister's clouding his judgement.
Brian : What was that?
Muse : Hey, I don't blame you. I get off on her surveillance photos too.