Latest Shears quotes from The Bridge on the River Kwai

Shears is played by William Holden in The Bridge on the River Kwai. 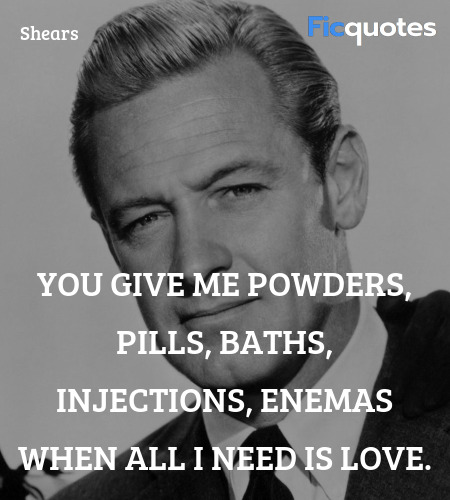 You give me powders, pills, baths, injections, enemas when all I need is love. 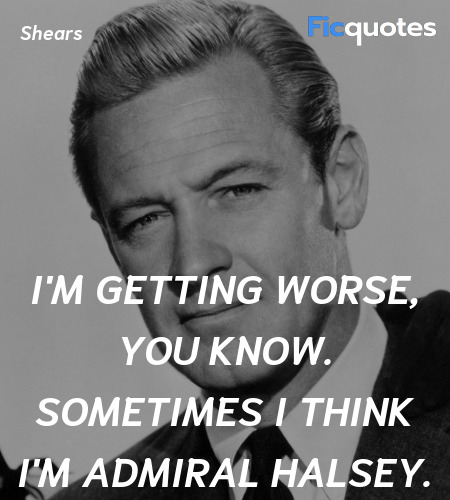 I can think of a lot of things to call Saito, but "reasonable"... that's a new one.

Maj. Warden: You'll go on without me. That's an order. You're in command now, Shears.
Commander Shears: You make me sick with your heroics! There's a stench of death about you. You carry it in your pack like the plague. Explosives and L-pills - they go well together, don't they? And with you it's just one thing or the other: destroy a bridge or destroy yourself. This is just a game, this war! You and Colonel Nicholson, you're two of a kind, crazy with courage. For what? How to die like a gentleman, how to die by the rules - when the only important thing is how to live like a human being!... I'm not going to leave you here to die, Warden, because I don't care about your bridge and I don't care about your rules. If we go on, we go on together.

Maj. Warden: Sir, it's most annoying. They say, in view of the time element, they don't think a few practice jumps would be worthwhile.
Major Shears: No?
Maj. Warden: No, they say if you make one jump, you've only got 50% chance of injury, two jumps, 80%, and three jumps, you're bound to catch a packet. The consensus of opinion is that the most sensible thing for Major Shears to do is to go ahead and jump, and hope for the best.
Major Shears: With or without a parachute?

Maj. Warden: I belong to a rather rum group called Force 316. Our headquarters is up in the botanical gardens.
Commander Shears: Protecting rare plants from the enemy?

Maj. Warden: Kill him... Kill him!
Major Shears: KILL HIM! KILL HIM!