Pirates of the Caribbean: The Curse of the Black Pearl (2003) Quotes

Best Pirates of the Caribbean: The Curse of the Black Pearl (2003) Movie Quotes

Pirates of the Caribbean: The Curse of the Black Pearl (2003)

Pirates of the Caribbean: The Curse of the Black Pearl (2003) Quotes 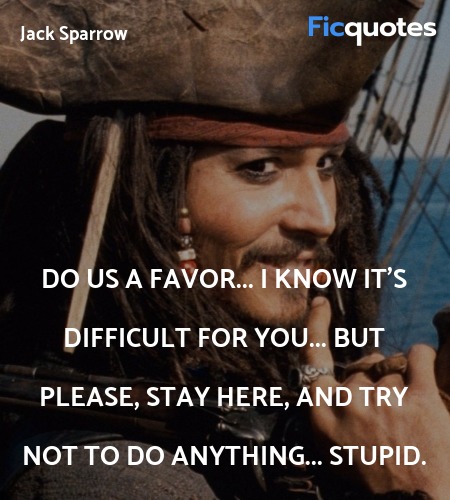 Do us a favor... I know it's difficult for you... but please, stay here, and try not to do anything... stupid. 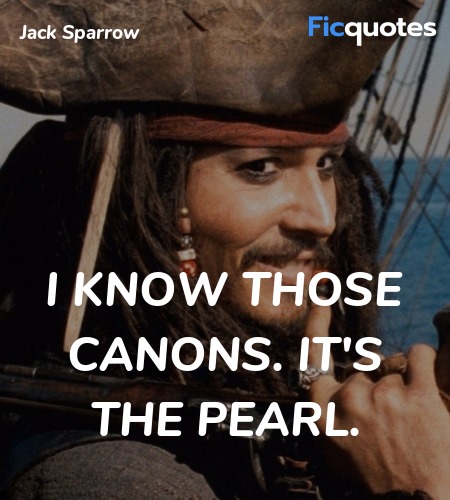 I know those canons. It's the Pearl. 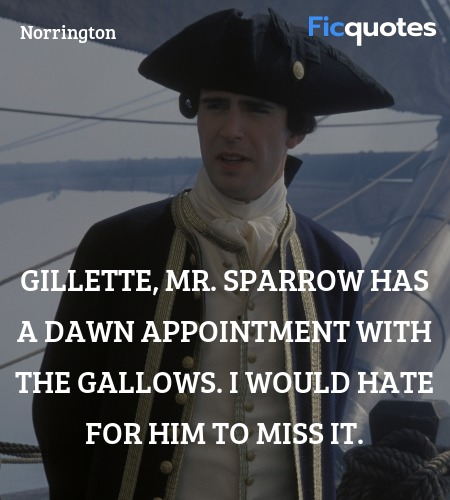 Gillette, Mr. Sparrow has a dawn appointment with the gallows. I would hate for him to miss it. 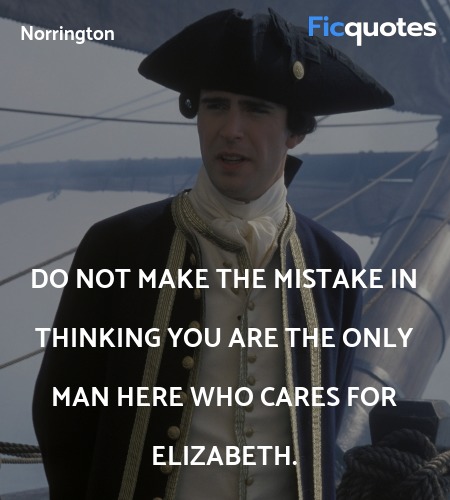 Do not make the mistake in thinking you are the only man here who cares for Elizabeth.

That is, without doubt, the worst pirate I've ever seen.

I'm curious. After killing me what is it you're planning on doing next?

Stop blowing holes in my ship!

Haul on the main brace, make ready the guns... and run out the sweeps.

We are cursed men, Miss Turner.

Strike your colors, ya bloomin' cockroaches.

You're off the edge of the map, mate. Here there be monsters.

Barbossa : For too long I've been parched of thirst and unable to quench it. Too long I've been starving to death and haven't died. I feel nothing. Not the wind on my face nor the spray of the sea. Nor the warmth of a woman's flesh.
Barbossa : You best start believing in ghost stories, Miss Turner... you're in one!

Blast all to carcasses, men! Forward clear to the powder magazine! And the rest of you, bring me that medallion!

and then they made me their chief.

The Medallion! She's taken it! Get after her you feckless pack of ingrates!

It's not your blood they needed. It was my father's blood. My blood... the blood of a pirate.

Elizabeth, I should have told you every day from the moment I met you. I love you.

You're pirates. Hang the code, and hang the rules. They're more like guidelines anyway.

Look! The moonlight shows us for what we really are. We are not among the living, so we cannot die, but neither are we dead.

Governor Swann : So, this is the path you've chosen? After all, he is a blacksmith.
Elizabeth : No.
Elizabeth : He's a pirate.

Elizabeth : Parley!
Pintel : What?
Elizabeth : Parley. I invoke the right of parley. According to the Code set down by the pirates Morgan and Bartholomew says you have to take me to your captain.
Pintel : I know the Code.
Elizabeth : Then it would state that if one demands parley you can do them no harm until the parley is complete.
Ragetti : Blazes to the Code!
Pintel : She wants to be taken to the captain! And she'll go without a fuss. We must honour the Code.

Elizabeth : But we've got to save Will!
Governor Swann : No! You're safe now. We will return to Port Royal immediately, not go gallivating after pirates!
Elizabeth : Then we comdemn him to death!
Governor Swann : The boy's fate is regrettable... but then, so was his decision to engage in piracy.

I'm not entirely sure that I've had enough rum to allow that kind of talk.

Officer : That's got to be the best pirate I've ever seen.
Norrington : So it would seem.

Pintel : You're supposed to be dead!
Jack Sparrow : Am I not?

Norrington : Good work, Mr. Brown. You've assisted in the capture of a dangerous fugitive.
Mr. Brown : Just doing my civic duty, sir.
Norrington : Well, I trust it you will always remember this as the day that Captain Jack Sparrow almost escaped. Take him away.

Me? I'm dishonest, and a dishonest man you can always trust to be dishonest. Honestly. It's the honest ones you want to watch out for, because you can never predict when they're going to do something incredibly... stupid.

Jack Sparrow : Take what ye can!
Mr. Gibbs : Give nothin' back!

A wedding? I love weddings. Drinks all around!

The only rules that really matter are these: what a man can do and what a man can't do. For instance, you can accept that your father was a pirate and a good man or you can't. But pirate is in your blood, boy, so you'll have to square with that some day. And me, for example, I can let you drown, but I can't bring this ship into Tortuga all by me onesies, savvy? So, can you sail under the command of a pirate, or can you not?

If you were waiting for the opportune moment, that was it.

Any man who falls behind, is left behind.

Harbormaster : Hold up there, you. It's a shilling to tie up your boat at the dock... and I shall need to know your name.

Jack Sparrow : What do you say to three shillings and we forget the name.
Harbormaster : Welcome to Port Royal, Mr. Smith.

You know, for having such a bleak outlook on pirates you are well on your way to becoming one: sprung a man from jail, commandeered a ship of the fleet, sailed with a buccaneer crew out of Tortuga, and you're completely obsessed with treasure.

Jack Sparrow : I thought you were supposed to keep to the code.
Mr. Gibbs : We figured they were more actual guidelines.

Now as long as you're just hanging there, pay attention.

Jack Sparrow : I know those cannons. It's the Pearl.
Man in Jail : The Black Pearl? I've heard stories. She's been preying on ships and settlements for near ten years. Never leaves any survivors.
Jack Sparrow : No survivors? Then where do the stories come from, I wonder?
Jack Sparrow : That would be the French.

Thank you, Commodore, for getting us ready to make sail! We would have had a hard time of it by ourselves!

Pirates of the Caribbean: The Curse of the Black Pearl (2003) Quotes Videos