Martha Rodgers is played by Susan Sullivan in Castle. 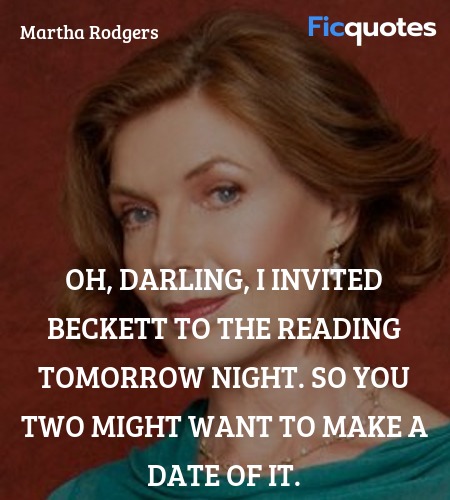 Oh, Darling, I invited Beckett to the reading tomorrow night. So you two might want to make a date of it. 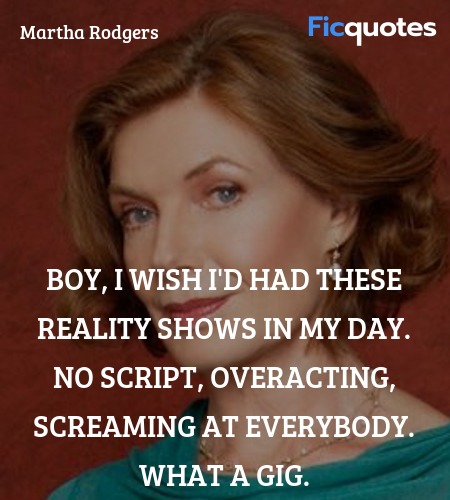 Boy, I wish I'd had these reality shows in my day. No script, overacting, screaming at everybody. What a gig.

Martha Rodgers: I don't know why you won't tell me where the party is?
Richard Castle: Because you'll show up.

You haven't heard of the Serenity?

Richard Castle: My little girl is going to college.
Martha Rodgers: It seems like just yesterday you were checking under the bed every night, promising her that monsters aren't real.
Richard Castle: Well, I lied. Monsters are real. They're the boys in her freshman dorm.
Martha Rodgers: Oh, speaking of which, before Alexis leaves, don't you think you should have the, uh, "talk" with her?
Richard Castle: You mean the sex talk? Mother, I covered that ages ago. I learned so much.

Martha Rodgers: Jim... I don't know how you do this. You know, I thought I would get used to this... new part of Richard's life, that constant danger, and the never knowing, and I, but I really thought there would come a moment, just a moment, when the worry would stop.
Jim Beckett: Katie's been doing this for more than a decade now... and I've had this clench in my gut since the day they handed her the shield... She does say she always feels safest when your son's watching her back.
Martha Rodgers: He says the same thing about her. Well... at least, wherever they are, they have each other to lean on.

We hope you enjoyed reading our collection of Martha Rodgers quotes. You can also browse other Castle quotes . If you think we missed any quote from Martha Rodgers or Castle, please send it to us.